Diseases, beware: A chemist may have found a way to detect you sooner. 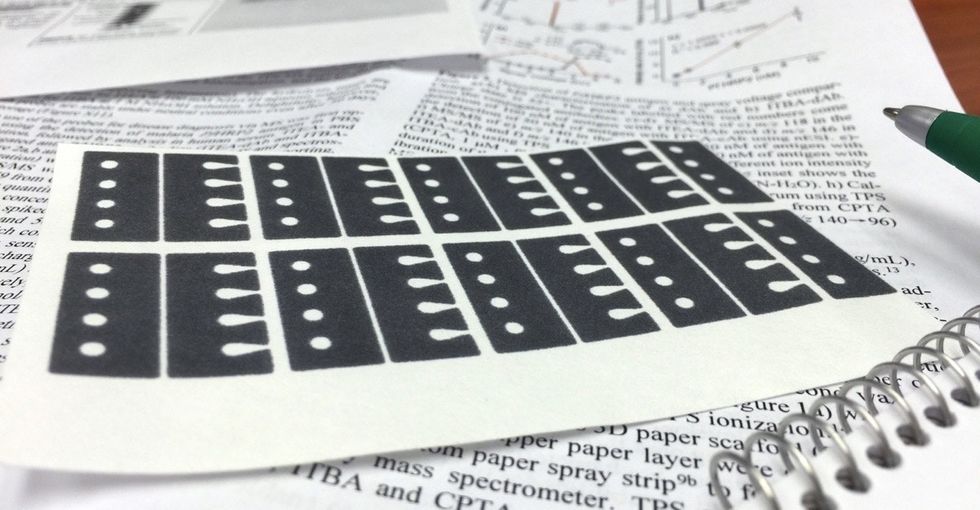 Imagine being hit with a dangerously high fever hundreds of miles away from the nearest hospital.

You live in a rural area, have little money for treatment or transportation, and don't have an easy way to physically get to the hospital.

When you're eventually able to see a doctor and take some tests, that's when he tells you some disconcerting news — you have malaria, your condition has already worsened, and now your treatment options are limited.

If only there had been a way to find out sooner, when more could be done.

The streets of Timbuktu in Mali. Image via iStock.

That's the harsh reality many people face in sub-Saharan Africa when it comes to malaria.

According to UNICEF, more than a million people die from malaria each year, and 90% of those cases of malaria occur in sub-Saharan Africa. What's even more heartbreaking is that the majority of those deaths are children under the age of 5.

Malaria also hurts the continent economically — Africa loses up to $12 billion every year due to a loss in productivity.

A close-up of the culprit. Image via CDC Global/Flickr.

Luckily, chemists at Ohio State University are developing a way to test for malaria without having to visit a doctor.

And all the patient needs is a piece of paper!

This would help people get malaria diagnoses sooner — if the test is positive, they know it's critical to go to the doctor, and when they do go, it would already be for treatment and not just for testing.

Currently, patients can take a Rapid Diagnostic Test (RDT) to find out if they have malaria or not, but the climate in Africa combined with the considerable expense of the test often prevent it from being an option. However, these are issues a new home test can address.

The man leading this charge is Abraham Badu-Tawiah, an assistant professor of chemistry and biology at Ohio State.

Having grown up in Ghana, he knew he wanted to come up with a way to provide an accurate diagnosis for people far away from a proper medical facility.

"Our main motivation is really to get to know whether you’re sick or not sick early enough so that we don’t wait or think it’s too late," said Badu-Tawiah. "If it’s just in the initial stages, you can actually take your time and do something to focus on getting well."

So how does this piece of paper work?

As a patient, all you would need to do is put a drop of blood in the reservoir, fold the paper in half, stick it in an envelope and then mail it to their lab. After a round of testing, you get your results. That's it!

The paper itself uses a special wax ink that creates a barrier to keep the blood sample in place. It's also charged with ionic probes that can tag the specific antibodies that act as biomarkers (basically, indicators) of a particular disease. Even better, the ionic probes aren't affected by light, temperature, or humidity and can keep the sample intact for up to 30 days — ideal for patients in sub-Saharan Africa.

Once the lab has the paper, they just dip it in an ammonia solution, peel the layers apart and put it in front of a mass spectrometer — the device that can find the disease biomarker and tell whether someone is sick or not.

Right now, the testing needs to be done in special labs because mass spectrometers aren't immediately available in developing nations and they're very expensive. However, smaller, less expensive ones are already in the process of being developed. So help is on the way!

It's also possible to use this device to test for certain cancers. In time, hopefully all of them.

In the Journal of the American Chemical Society, Badu-Tawiah and his colleagues state that they can test for any disease where the human body produces antibodies. This includes ovarian cancer and cancer of the large intestine.

But they're not stopping there.

"It will cover all kinds of cancer eventually when we advance in knowledge," added Badu-Tawiah. "What we need is to be able to identify a specific biomarker for each cancer."

The paper is designed to be very affordable at just 50 cents a piece.

And that number could go even lower once they enter mass production. Access for all, regardless of location, is incredibly important to Badu-Tawiah.

"Making the resources accessible to a lot of people I think is the solution. That’s why I came up with this idea to build a bridge and to connect the rural and the cities," he said. "This will be useful for a lot of people, not only in Africa, but in the U.S. and many other places. It will change lives."

"Our next move is actually going down from blood to saliva and then to urine," says Badu-Tawiah. "We are really hopeful that within a few years, this will come to fruition."

They're also developing a separate method that is able to detect malaria, syphilis, HIV, and tuberculosis all on the same device.

This type of research has the potential to change how the world approaches deadly diseases.

Just thinking about how a drop of blood on a piece of paper could potentially replace a long journey to a testing facility is an exciting development.

In places from Africa to the U.S., this kind of innovation could one day be available at the corner drug store. It has a long way to go, but the prospects so far are exciting.

In this instance, it really is the smallest things — like a 50-cent piece of paper — that can make the biggest difference.