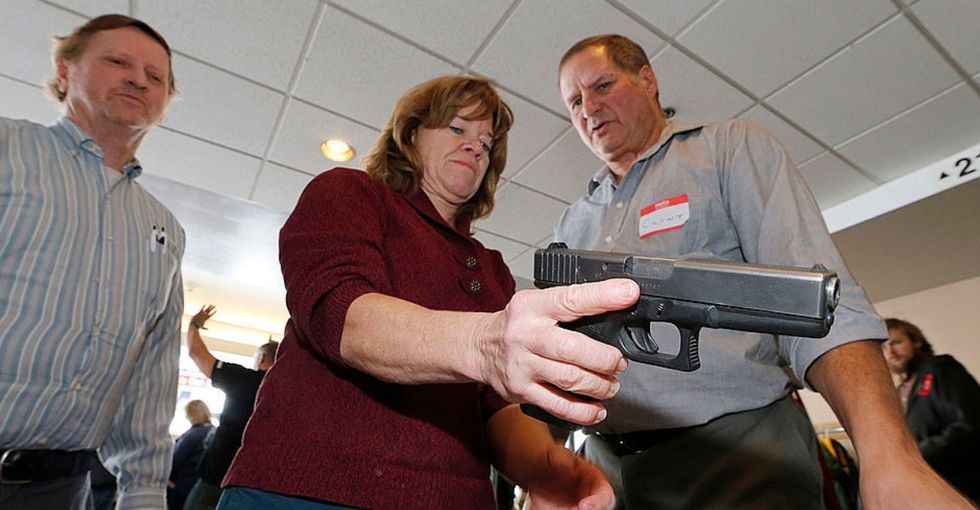 North Carolina is proposing a law to allow teachers to carry guns in school. Here's why that's a horrible idea.

Two bills have been filed in the North Carolina state legislature that would loosen gun restrictions in schools, allow teachers to carry guns, and even pay some teachers more for doing so.

Both of the proposed laws would require training for those who want to carry guns. In the house bill, participating teachers and staff would have to complete 16 hours of active shooter training. The senate bill proposes having select teachers serve as secret "teacher resource officers" who carry firearms. The position would require Basic Law Enforcement Training, after which the teachers would be sworn in as law enforcement officers. It also includes a 5% pay increase.

If teachers were to be armed, they should definitely be trained. But no amount of training makes up for the fact that a loaded gun in a classroom full of children is a recipe for disaster.

Police officers and soldiers are trained extensively not only in how to handle firearms, but also in the mental and emotional realities of their jobs. And even then, trained law enforcement only have an 18% accuracy rate in high stress shoot-out situations.

So, the people who are rigorously trained and actively prepared to engage dangerous criminals as their full-time job hit their target in active shooting situations less than one in five times—and they sometimes shoot innocent bystanders. Now imagine the chaotic scene of a school shooting, with terrified children everywhere. Do we really think a teacher with a gun, who just a moment ago was teaching fractions, is going to miraculously turn into a sharpshooting hero?

Expecting a teacher to be able to shift mental gears from teaching arithmetic to employing tactical active shooter training in a matter of seconds, while also managing a classroom of freaked out children, is expecting too much. How could we possibly think that a teacher—even one trained to fire a gun—could respond accurately and wisely in a shooting situation with a million different variables, and do so without putting students' lives in greater danger?

Despite some individual anecdotes, the "good guy with a gun" argument has been debunked many times. According to a 2014 FBI report, active shooters that were stopped by civilians were stopped more often by good guys without guns than with them, and evidence shown that more guns does not equal fewer crimes.

But aside from that, a "good guy with a gun" in a shooting scenario with a "bad guy with a gun" can cause confusion for law enforcement who show up to stop the bad guy. How do they know which guy-with-a-gun they're looking at?

A school shooting situation is a chaotic, highly intense scene where officers have to make split second decisions. Teachers would not only be putting themselves at greater risk by wielding a gun, but also their students. Kids tend to gravitate toward their trusted adult teacher for protection, which would mean the armed good guy, whom police might mistake for the bad guy, would likely have children around him or her.

Shooting a bad guy is traumatic enough. An officer shooting a child they're trying to save because an armed teacher created more confusion than necessary would be devastating for all involved.

Guns in schools put everyone at greater risk.

I'm a 5'5" woman. An average high schooler could overpower me if they really wanted to, and I wouldn't stand a chance against more than one. If I'm carrying a gun, what's to stop some enraged or deranged students from sneaking up and taking my firearm while I'm writing on the board? Theoretically, they wouldn't know if I was carrying, but young people aren't stupid. If teachers are allowed to carry guns, kids are going to figure out who has them. Guaranteed.

And as a parent, I for damn sure would want to know if my child's teacher was carrying a loaded gun in their classroom. I think it should be every parent's right to know if their child's teacher is armed. How is that information going to be kept secret?

And that's not even getting into the potential for accidents. What if a teacher accidentally leaves their loaded gun in the bathroom, like happened in Pennsylvania and at Stoneman Douglass in Parkland, Florida (of all places, seriously)? What about when an armed teacher or staffer accidentally shoot their guns inside the school, like happened in California and in Virginia last year?

Or what about the gun-carrying teacher who gets pushed to the brink? The teacher who feels threatened by a student, a la "stand your ground" laws, and shoots them in a fit of fear or anger? Students-teacher altercations are not terribly uncommon. Adding loaded guns to the mix? No thank you.

Teachers should be focused on teaching, not doing the job of SWAT teams and police officers.

I taught in middle schools and high schools, and it was the hardest job I've ever had. Teaching requires a level of constant focus and care that people don't realize unless they've done it. A teacher's job is to teach—to be a mentor, to share knowledge, to inspire and guide young people—and those skills requires immense dedication and attention. That's what teachers should be focused on, not on making sure they're armed and trained and ready to kill.

Some may believe that simply knowing some teachers may be armed might serve as deterrent. But having actual armed guards at Columbine and Stoneman Douglass high schools didn't deter those shooters. If someone decides to go on a killing rampage, they're not usually worried about dying themselves. It's a suicide mission, and the idea of a teacher with a gun isn't going to stop them.

There are many avenues to explore for keeping our schools safer, but putting loaded guns into our classrooms and training teachers to kill is not one we should be entertaining. The potential risks far outweigh any potential benefits to make it a reasonable option.

Keep ReadingShow less
joy
Get stories worth sharing delivered to your inbox
By signing up you agree to Upworthy's privacy policy.
Joy