Chess can have a huge impact on students' lives. Just ask the first black grandmaster. 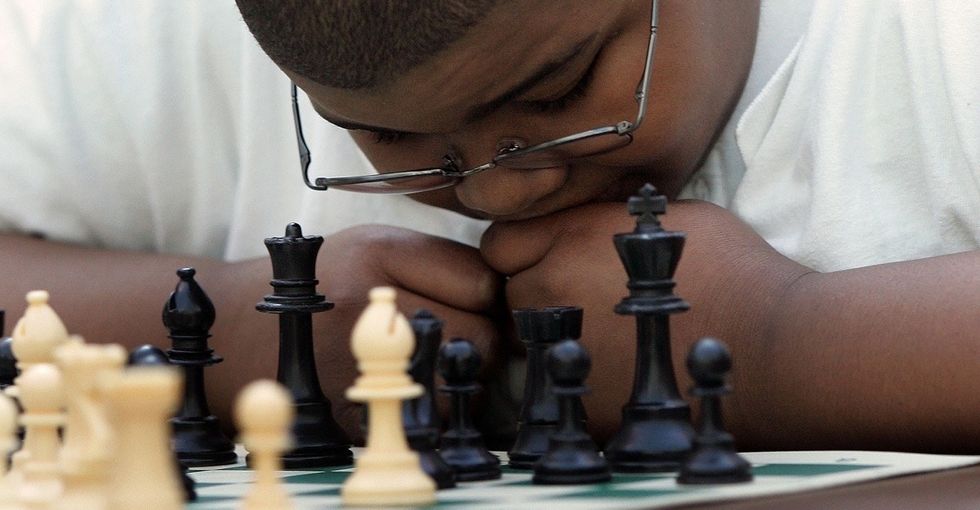 Brownsville is one of New York City's worst neighborhoods for poverty and crime.

But on one spring morning, the gymnatorium at PS 446 was overflowing with energy, packed with eager elementary students in their matching uniforms, all buzzing with excitement. Their howls and cheers filled the cavernous space, bouncing off the basketball backboards and shaking the school's crumbling foundation as the sound swelled to a cacophonous crescendo, and the chess team came charging down the stairs and —

The guests of honor at this school-wide pep rally were heading to the National Elementary Chess Championships in Nashville. For some of them, their parents had never even left Brooklyn.

"A large piece of the achievement gap between lower and middle income students has to do with these kind of experiences," Meghan Dunn, the school's principal, told Upworthy.

Full disclosure: She's also my big sister. But it doesn't take familial bias to see the incredible advantages of rooks, pawns, and queens.

“The only time that some of these kids are calm is when they're sitting at the chessboard," said Michael O'Gara, a teacher at PS 446 who oversees the Chess Club. "Their confidence is higher too. They're always being told they suck, someone on the playground or on the street saying 'I'm better than you.' But this is something where they can take pride."

And they should be proud — in one category, their team ranked 22nd out of 50, which meant that each student got to bring a trophy home. (There were hundreds of teams overall.) That's a pretty big deal in a neighborhood with a median annual income of less than $16,000, and where less than one-third of the predominantly black population has a high school diploma.

Even without the pep rallies, the Chess Club at PS 446 is treated more like a varsity sports team, according to Mr. O'Gara. That could be why the team has doubled in size since it started in fall 2012.

Students even sacrifice their time on weekends to travel all across New York City to compete in competitions organized by Chess-in-the-Schools, a nonprofit organization that promotes chess for academic achievement in inner city schools. It's hard enough to get low-income students to school during the week; getting anyone to go from Brooklyn to Staten Island on a weekend is practically unheard of.

Chess might sound like an unlikely escape for these students. But it worked for another Brownsville resident: Maurice Ashley.

You might recognize his name from a recent viral video where he totally owns a trash-talkin' hustler in a chess match in Washington Square Park.

Ashley was born in Jamaica and emigrated to Brooklyn with his family when he was 12 years old. Growing up, he would watch his older brother play chess with friends, and while he understood the basic gist of it, it was never something he considered seriously.

But that all changed in high school, after a friendly game with a classmate at Brooklyn Tech. As he said in an interview with Mashable, "A friend of mine was playing chess. I remembered the rules from Jamaica. I played him; I was a pretty smart kid and thought I'd beat him, and he crushed me."

Intent on a rematch, he picked up a book on the game in hopes of learning a few tricks ... and he was hooked for life.

In 1999, Maurice Ashley was awarded the rare distinction of International Chess Grandmaster — making him the first black man to earn the title.

At the time, there were fewer than 500 grandmasters in the world, although there have been at least two other black grandmasters recognized since then. "African continent GMs do exist; but, according to the system of racial classification, I am the first black GM in history," he clarified in an interview with the U.S. Chess Federation. "It matters, and doesn't matter, all at the same time."

But it wasn't just the color of his skin that set him apart from his peers. Where most chess masters are characterized as self-serious intellectual introverts, Ashley was always been outgoing and loves to share his passion for the game. ''There are not many Maurice Ashleys," said Allen Kaufman, the former executive director for Chess-in-the-Schools. "The typical grandmaster is an introvert and spends his time studying and playing rather than teaching kids.''

While he was still on the path to grandmasterdom, Ashley had spent nearly a decade teaching chess as a part of the Harlem Educational Activities Fund, and he decided it was time to give back, knowing firsthand the value of the game's rewards.

Also, he just loved the kids. As he told Mashable:

"Chess changes lives. I've coached kids in Harlem, in Brooklyn, in circumstances that are not easy. ... I've watched those exact same kids take the benefits of chess, whether it be critical thinking, better problem-solving, better concentration, better focus, and gone on to top universities around the country, to great jobs and careers."

Ashley's right. Chess might be a game, but it also helps people overcome when life feels like a stalemate.

If you’ve never played, give it a try. If you know how, teach someone else.

It doesn't matter if you live in Brooklyn or Boise — the simple elegance of the game can teach us  all about important skills like perseverance, strategy, focus, and even teamwork (which is particularly remarkable, considering it's a one-on-one game).

And for those people who aren't even sure where their next meal is coming from, it shows them that a few lost pieces aren't the end of the game.

Here's a video of Maurice Ashley offering some awesome advice for life, and for chess: