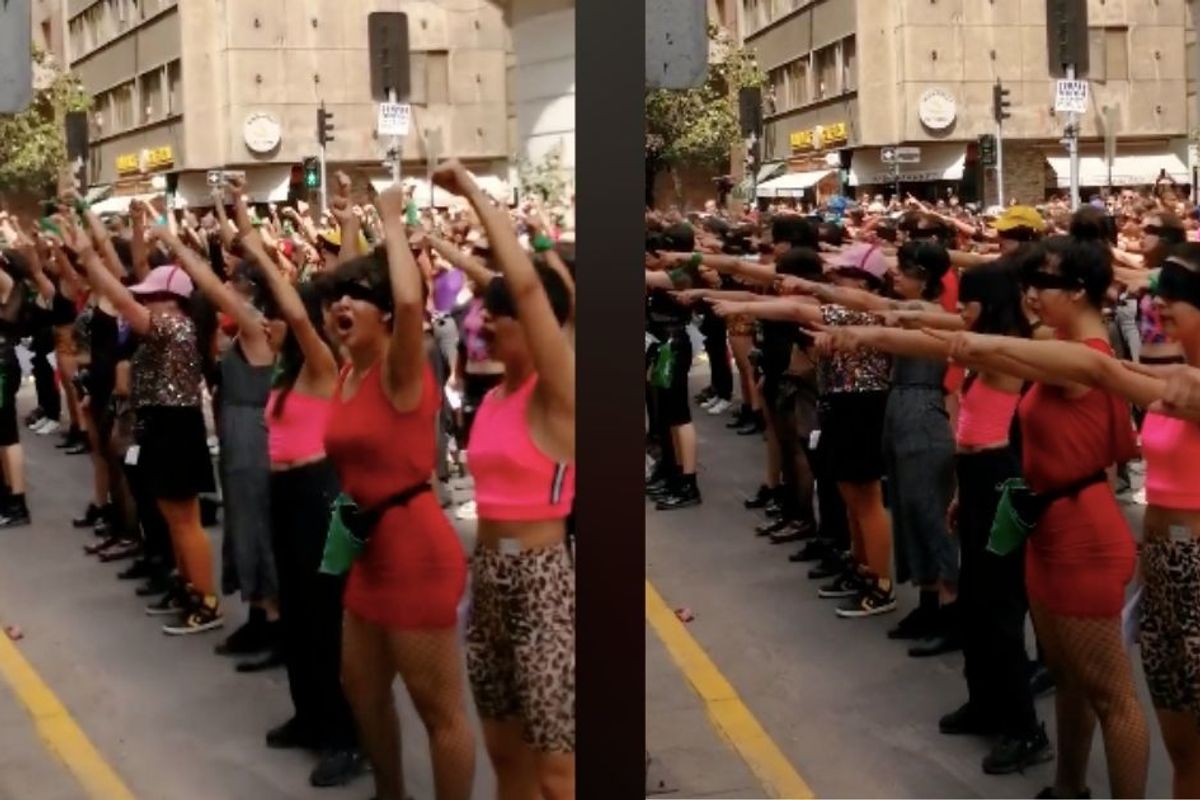 Protests seem to be sweeping the planet, from Hong Kong to Iran to Chile, over issues from democracy to gas prices to social and economic inequality. Recently, amidst other protests, a powerful feminist movement showed up on the streets of Chile to highlight the issue of sexual violence.

Scores of women gathered to rally outside of the Ministry for Women's Rights and Gender Equality to protest police violence that has taken place during the country's ongoing protests of extreme inequality. According to an article from Common Dreams:

"The Chilean Special Forces, National Police and the military have reportedly killed at least 26 people, detained over 15,000, caused thousands of gunshot wounds, and been accused of 1,100 cases of torture and inhuman treatment; they've also been charged with over 70 cases of sexual violence and countless allegations by women of beatings, rape, and threats of rape. A Santiago psychologist reported arrested women have been stripped naked in front of men and touched in the genitals; many were penetrated by a rifle and told "they are going to be raped and then killed."

Hearing such accounts makes the chant sung by the blindfolded women gathered at the rally all the more powerful, as they call out the police and those in power as perpetrators of violence instead of the protectors they are supposed to be.

According to one commenter, the chant is loosely translated as follows:

The patriarchy is a judge

who tries us for being born

is the violence you now see.

It's femicide, impunity for my murderer,

it's disappearance, it's rape.

And it wasn't my fault,

nor where I was,

It's the police, the judges,

the state, the president.

The oppressive state is a macho rapist (x2).

without worrying about the criminal

because your policeman lover

is watching over your sweet and smiling dreams.

RELATED: Australia is banning entry to anyone found guilty of domestic violence anywhere in the world.

According to the World Health Organization, one in three women around the globe will endure physical or sexual violence in her lifetime, with the UN classifying such violence as one of the "most widespread, persistent and devastating human rights violations in our world today." And it's a near-universal fact that sexual assault victims rarely see justice served, literally adding insult to injury.

Until women feel safe with and protected by those charged with their protection, we will continue to see them uniting in the streets to make their voices heard in beautiful and powerful ways.

From Your Site Articles
feminism
popular

Cats are notoriously weird. Everyone who's had cats knows that they each have their own unique quirks, idiosyncrasies, preferences, habits, and flat-out WTFness.

But even those of us who have experience with bizarre cat behavior are blown away by the antics this "cat dad" is able to get away with.

Kareem and Fifi are the cat parents of Chase, Skye, and Millie—literally the most chill kitties ever. They share their family life on TikTok as @dontstopmeowing, and their videos have been viewed millions of times. When you see them, you'll understand why.

Take Chase's spa days, for example. It may seem unreal at first, but watch what happens when Fifi tries to take away his cucumber slices.

When she puts them back on his eyes? WHAT?! What cat would let you put them on once, much less get mad when you take them off?

This cat. Chase is living his best life.

But apparently, it's not just Chase. Skye and Millie have also joined in "spaw day." How on earth does one couple end up with three hilariously malleable cats?

Oh, and if you think they must have been sedated or something, look at how wide awake they are during bath time. That's right, bath time. Most cats hate water, but apparently, these three couldn't care less. How?

They'll literally do anything. The Don't Stop Meowing channel is filled with videos like this. Cats wearing glasses. Cats wearing hats. Cats driving cars. It's unbelievable yet highly watchable entertainment.

If you're worried that Kareem gets all the love and Fifi constantly gets the shaft, that seems to be a bit for show. Look at Chase and Fifi's conversation about her leaving town for a business trip:

The whole channel is worth checking out. Ever seen a cat being carried in a baby carrier at the grocery store? A cat buckled into a car seat? Three cats sitting through storytime? It's all there. (Just a heads up: A few of the videos have explicit language, so parents might want to do a preview before watching with little ones.) You can follow the couple and their cats on all their social media channels, including Instagram and YouTube if TikTok isn't your thing, here.

If you weren't a cat person before, these videos might change your mind. Fair warning, however: Getting a cat because you want them to do things like this would be a mistake. Cats do what they want to do, and no one can predict what weird traits they will have. Even if you raise them from kittenhood, they're still unpredictable and weird.

And honestly, we wouldn't have them any other way.

From Your Site Articles
Related Articles Around the Web
humor