Bill Nye's new show is opinionated, unapologetic, and exactly what we need. 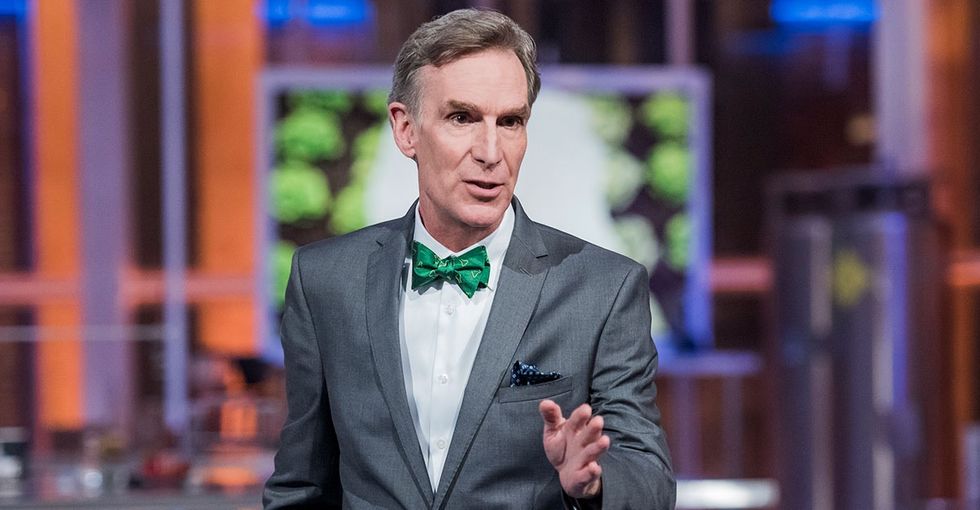 The show, with the delightfully boastful name "Bill Nye Saves the World," isn’t a continuation of his popular 1990s kid’s show. The new show is aimed at now-grown millennials and mixes the original show’s enthusiasm, humor, and wonky green-fluid-in-a-beaker experiments with "Daily Show"-style field pieces and "Penn and Teller: Bullshit!"-style takedowns of, well, bullshit.

I’ve had the time to sit down and watch a few of the episodes and — as a science guy myself — I have to say, I’m liking it. When correspondent Karlie Kloss visits Venice to see the gigantic pontoon system designed to keep the city above water, I was legitimately fascinated. When Nye demonstrated how carbon dioxide changes the pH of water by blowing down in a straw into a flask, it was like being 8 years old again.

The show is funny, interesting, and educational. It’s also bluntly — and unapologetically — opinionated.

Moderated talks are a recurring segment of the show. Image from "Bill Nye Saves the World"/Netflix.

When it comes to hot-button issues, such as climate change or alternative medicine, Nye is not shy about calling out politicians and conspiracy theorists. He's obviously fed up, and the anger in his voice is real. It's incredibly cathartic — if you agree with him.

As much as I enjoyed the show, I did find myself wondering if Nye’s brashness, as entertaining as it is, might actually end up driving away the viewers Nye seems to most want to convince.

Take the field pieces, for example. They're incredibly fun to watch, but there are a few moments — such as the one in which Joanna Hausmann visits a "sound therapist" who yells at her kidneys — where the show feels like it's veering away from reporting and more into outright mockery of its subjects. "How did you keep a straight face?" Nye asks Hausmann afterward.

But maybe an outspoken, opinionated science guy is OK. In fact, Nye might just be exactly the voice we need right now.

For a long time, scientists and science communicators strove to be apolitical, either from a healthy sense of self-doubt or from fear of being accused of bias. As the belief in science has become more and more of a contentious issue, there has been an understandable push toward keeping science un-opinionated.

But maybe this feeling is part of the problem. By staying out of the public discourse, science has let media personalities and politicians pick up the narrative and run with it. Pseudoscience and myths have grown like weeds in an unattended lawn.

Scientists who act more like Nye — embracing their voices and not being afraid to outright disagree with people who disregard facts and data — might just be part of the solution. Admitting that they have opinions (backed by data) can help scientists look more like the actual thinking, breathing humans they are. Science backs me up on this, too: A recent study suggested that scientists don’t lose credibility when they take stands on issues.

No matter how scientifically inclined you are, Nye's show is nothing if not entertaining and informative.

While I still feel like there are parts that could benefit from a lighter touch or a bit more nuance, the show is still on the whole surprising, informative, and quite funny. It's a worthy successor to the original series and definitely worth checking out.

All 13 episodes of the first season of "Bill Nye Saves the World" are available on Netflix as of April 2017. You can watch the trailer below.