Being arrested is terrifying. This nonprofit can help you make your “one call” count. 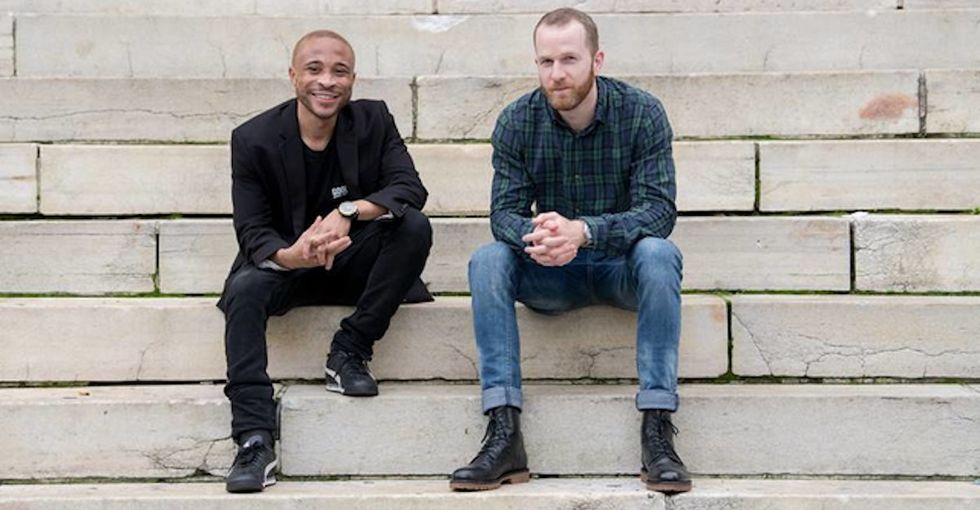 When Jelani Anglin was a teenager, he was arrested for a minor infraction.

When he was taken to central booking, Anglin recalls how terrifying it was and how helpless he felt. He realized the experience was something that thousands of other people go through on an annual basis.

"In the precinct, you're nervous, you're seeing folks coming in and out in handcuffs, you're being fingerprinted, all your items are being taken away and there's not much conversation with the police officers," says Anglin.

Even though it was only a minor infraction, and he was let go at the arraignment, being arrested was something Anglin never forgot. But rather than turn against "the system," the helplessness he felt made him realize he wanted to work to change the experience for others in similar positions.

So, when he graduated high school and got to college, he became involved in community organizing, doing work with unions in the New York area and working on high-profile political campaigns.

After graduating from college, Anglin moved into the tech sector. And even though his job diverged from the activism he pursued in college, he found there was an intersection between technology and working to empower underserved communities.

That's when he started thinking about how to use all his new knowledge to create change in the justice system.

But first, he knew he needed to up his technology know-how.

So, in 2016 Anglin applied for and was awarded a fellowship to Blue Ridge Labs, a tech incubator that aims to close the gap between underserved communities and technology. That's where he and his business partner came up with a brilliant idea to help people after they've been arrested.

Blue Ridge Labs is an operating initiative at Robin Hood, "New York's largest poverty-fighting organization," according to the nonprofit's website. Blue Ridge Lab's mission is to bring technologists and communities together to help low-income residents save time and money, connect to resources, and navigate complex systems.

What's particularly innovative about Blue Ridge Lab's model is that the incubator is 100% focused on building technology. They do that through a community-centered design process that gives members multiple opportunities to influence what gets built — whether that's by helping them select the topics they'll focus on, sharing their experiences during the research process, or giving feedback on product prototypes.

The program is sponsored in part by Capital One, which not only provides funding but also offers services that help Blue Ridge Labs fellows practice and refine pitches for the organizations they will create while in the program. Through their Future Edge initiative, which invests in local community grants and programs to help more Americans, businesses and nonprofits thrive in the digital age, Capital One supports programs, like Blue Ridge Labs, that leverage technology to remove barriers and solve problems in the community.

This year, the company will also join Blue Ridge Lab's Investment Committee, which helps decide which projects the organization will fund.

For Anglin, the fellowship was an opportunity to create a resource that would help arrested people make sense of the justice system right from the first phone call they make when they're in custody.

Even when people do remember the numbers of loved ones, their loved ones often don't know how to assist them or don't have money for a lawyer.

"What ends up happening is that now, you're in the precinct, you're being interrogated by police, you don't know your rights, and you're saying things that can be used against you in a court of law," Anglin continues. "That's what happens many times here in New York City, right now, today."

In fact, according to recent stats gathered by Good Call, approximately 300,000 arrests occur in New York City every year, most of which are for low-level misdemeanors. Of those, approximately 47,000 people are sent to jail to await trial without being convicted. An arrest doesn't equal guilt, but it does make life more difficult. People who are arrested may lose their jobs, face expulsion or have their immigration status threatened. And many have little to no knowledge of how to navigate the justice system.

Anglin and Gabriel Leader-Rose, another fellow at Blue Ridge Labs, created Good Call to ensure that the one phone call an arrestee is given is legitimately useful.

Photo courtesy of Capital One.

Ostensibly, Good Call is a hotline, but beneath the surface, it's much more than that. It's a promise that every "one phone call" is answered by someone who can do something to help.

Any arrested person or loved one who calls 1-833-3-GOODCALL can be connected via the organization's proprietary technology to a lawyer within minutes. That lawyer can advise them on what to do next, invoke the client's rights, and begin work on their case right away. Because Good Call works with lawyers throughout all five of New York's boroughs, anyone in the city can receive life-changing help simply by remembering one number. The hotline creates a network of legal providers that can support more callers than any one office could alone, and lawyers can be reached 24/7.

By facilitating early legal intervention and a more reliable way to inform an arrested person's loved ones, Good Call helps ensure fairer arrest outcomes for all New Yorkers, regardless of their income.

But what really differentiates Good Call from other legal aid hotlines is its ability to store emergency contacts through its website before an arrest even occurs, creating a safeguard that will notify all the important people in someone's life in the unfortunate event that they're arrested.

So far, the system's working phenomenally.

Since 2016, Good Call has given more than 800 New Yorkers peace of mind by providing answers during a frightening and confusing time.

But this is only the beginning for Good Call. Anglin and his crew want to create lasting change across New York...and beyond.

Anglin and his co-founders — who also include Software Designer Eugene Lynch, Designer Stephanie Yim, and Community Engagement Coordinator Malik Reeves — are working to expand the service even further, letting all New Yorkers know that they have support if they've been arrested.

“Since we expanded to all five boroughs of NYC, we've been fundraising to build up our outreach team and working towards making Good Call as well-known as 911 or 311," says Anglin. “We've created new gear featuring Good Call's logo and information about your rights when dealing with police. We're also utilizing social media, digital ads, and PR."

On the technical side, they've created a “text signup" feature that allows individuals to save emergency contacts via text.

"One phrase that we always like to say is that we don't design with the community in mind, we create with the community," says Anglin. "In 2019, we would like to hire more folks from the community which we serve, give them the skills and tech, educate them in community organizing and then have them go back and empower their communities."

And they have dreams of expanding way beyond the city limits, too.

"We're seeing that it works here in New York. We really wanna change the criminal justice landscape across the country."

On the big comeback weekend, people flocked to social media to share images and videos of their free treats, including festive Halloween cookies (because who doesn’t love TJ’s holiday themed items?) along with hopeful messages for the future.
Keep ReadingShow less
internet
Education