An oil spill ravaged their waters. This First Nations family stepped up to help stop it. 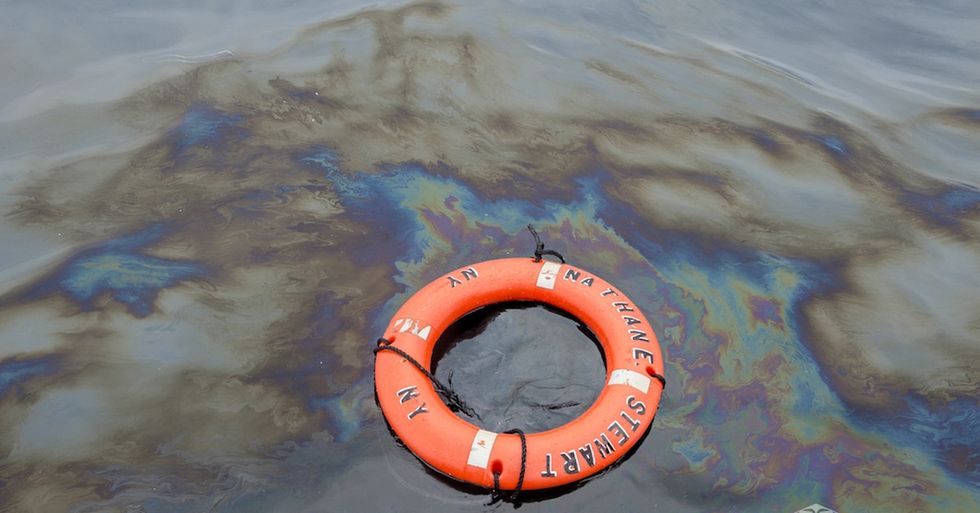 When Tracy Robinson went to bed on Oct. 12, 2016, she thought about spending time on the water the next day, monitoring crab fisheries.

Unfortunately, that's not what the next day held in store.

At 1:13 on the morning of Oct. 13 (local time), the tugboat Nathan E. Stewart and its barge DBL 55 ran aground on a shallow underwater reef near Bella Bella on the central coast of British Columbia, in the territory of the Heiltsuk First Nation.

Diesel spilled by the Nathan E. Stewart (top center) streams into the water. Image via Heiltsuk Nation, used with permission.

For hours, breaking waves slammed its hull up and down into the reef, ripping holes in its fuel and oil tanks. Just before 10 a.m., the tug sank, and upward of 27,000 gallons of marine diesel began leaking out into the sea.

Robinson was one of the first people on the scene of the spill.

Robinson in her boat, tending to containment booms. Image via Heiltsuk Nation, used with permission.

For the first 36 hours, everything was chaos. The private company that oversees oil spill cleanup on Canada's west coast had boats that could help — but they were 185 miles and a full day's trip away. There were additional supplies and staff en route from Vancouver, but the small planes that flew them up the coast couldn't get out in bad weather for three days.  In the absence of leadership, members of the local First Nation, the Heiltsuk, took to their boats and stepped in.

"My partner and I were out there just before 10, just after the tug sank," Robinson said. "There were Heiltsuk boats pushing on the barge to keep it off the rocks. We started grabbing boom and waited for other Heiltsuk members to come out with the absorbent noodle boom, just trying to stop the diesel from spewing into Gale Pass. That was all we had and all we could do."

There are strong marine currents, big storms, and rocky coastlines that make it hard to create containment plans. There are a million places where diesel can pool. It sticks to low-hanging tree branches and tall sea grass; it adheres to rocky beaches at high tide, then streams out into deeper water when the tide retreats.

Containment booms, a popular means of keeping oil in place so it can be recovered, are basically useless there because the wave action forces the diesel over their tops or underneath. Over the last 30 days, currents and storms have caused the booms to fail again and again, sometimes even pulling them apart, scattering beaches with diesel-soaked padding and styrofoam pellets.

The remains of a containment boom on a beach near Gale Creek. Image via April Bencze/Heiltsuk Nation, used with permission.

The Heiltsuk understand these lands and waters better than anyone. They also know what a spill like this means for the area and the people who live there.

When the tug ran aground, it did so on Athlone Island, beside the mouth of a narrow marine passage named Gale Creek. Nicknamed the "breadbasket," it's a particularly important hunting, fishing, and harvesting ground for the Heiltsuk people; they harvest more than 25 different food species there, from cockles and clams to sockeye and coho salmon. The Heiltsuk sell some of their harvests through a small commercial fishery and keep the rest to feed their families.

Robinson's family has a strong connection to Gale Creek. "My mom was a commercial clam digger for 20 years, and she worked there," she says. "Now I'm working on the water, and I was going to do my first clam fishery there this year. After the spill, we don't know when we'll be able to harvest there again."

A sea otter floats lazily in Gale Creek with the diesel sheen nearby. Image via Tavish Campbell/Heiltsuk Nation, used with permission.

A full month after the spill, there's finally a break in the weather long enough to start the process of dragging the tug off the reef and hoisting it on to a barge. Even that is slow-going and frustrating.

Once it is gone, many of the 200+ engineers and workers who've converged on Bella Bella will leave, and the Heiltsuk will be left to oversee the long process of recovery.

"When I was younger, my mom and I did a restorative justice program where we lived out in Gale Creek for a month," revealed Robinson, her voice breaking. "We had brought food, but we tried to eat as much as we could off the land. We ate mussels off the rocks, picked seaweed and sea asparagus off the beach. My mom pulled cedar bark, and we would weave baskets or cedar roses, trying to learn to live off the land. It was rejuvenating and brought back the culture in me. Now, I feel so lost and I feel so sorry for my kids. They’re never going to experience the full riches, the full amazingness of Gale Creek."

Prime Minister Trudeau's long-promised ban on oil tankers is guaranteed to come before the end of the year, and the Heiltsuk have asked him to make the announcement in Bella Bella. While those regulations are long overdue, they cannot fix the damage done here. The cultural, environmental, and psychological impacts of this spill will reverberate for a long time.

Robinson with family on the beach near Bella Bella. Image via Tracy Robinson, used with permission.

For Robinson, right now, being out on the water, helping however she can, is all she wants to do. "I was out on the water for 21 days straight with this spill. There's nowhere else I'd rather be," she said.

"I don't know what's going to happen when the tug is finally out of the water. I just know I'll be out there. The government says that our oil spill response system should be 'world-class.' But if anyone is world class right now, it’s the Heiltsuk."