A very low-tech approach to cleaning the ocean could have big results. 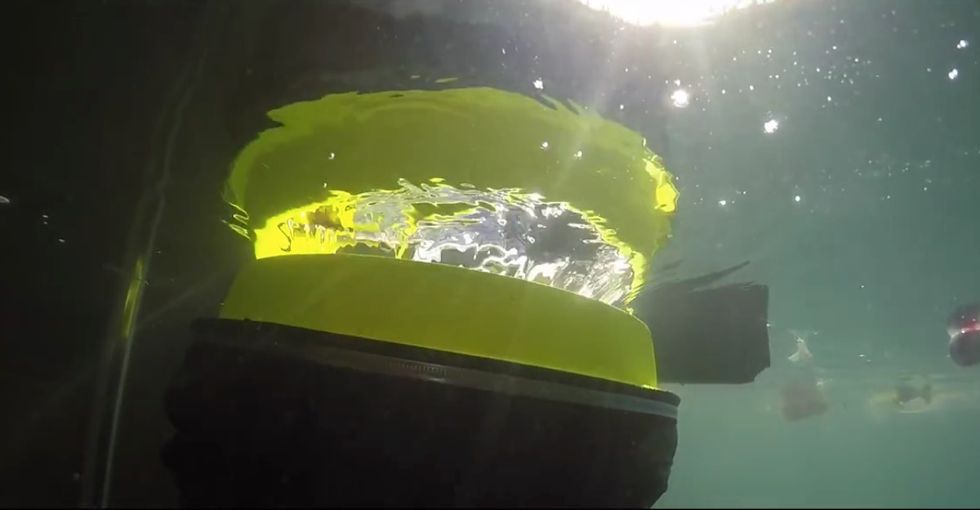 Two Australian surfers just came up with a really neat way to help clean the ocean.

It's called the Seabin, and it's the brainchild of Andrew Turton and Pete Ceglinski. They call it "a simple solution to our oceans' pollution."

It lives up to its name, looking like a bin in the sea.

Here's how it works.

Water and trash flow through the bin. The trash gets caught in the bin, while the water gets pulled up through a pump on the dock. Then a water pump separates oil from the water, and the water flows back down where it started, sans trash.

Image from The Seabin Project, used with permission.

The trash is collected by simply pulling the Seabin out of the water and dumping it out.

While other ocean-cleaning ideas are being put into place right now, the Seabin is a bit different.

Take, for example, The Ocean Cleanup, a 1.2-mile-long system slated for launch in 2016. The Ocean Cleanup collects plastic as it washes through the structure. The Seabin, as you can see, is a tiiiiiiiny bit smaller than that.

Plus, a single Seabin can collect more than a half ton of trash per year.

That's a little over 1,200 pounds, to be more specific. The creators plan to make future Seabins out of recycled plastic, too.

“One of the goals is to make the Seabin from our own plastics to create another Seabin to capture more; it’s a domino effect,” the creators explained in a video. “The second goal is to create a world where we don’t need the Seabin.”

For now, we need all the help we can get when it comes to our oceans.

Every year, 8 million tons of plastic wind up in the ocean, and it's estimated that the ocean is currently home to around 5.25 trillion (with a "t") pieces of plastic.

A man removes plastic bags and other rubbish from Manila Bay. Photo by Jay Directo/AFP/Getty Images.

That's the message Seabin creators have for the world. It's easy to feel hopeless and throw your hands up in defeat, but if we all work together to find the right combination of antipollution tactics, we can reclaim clean, beautiful oceans.