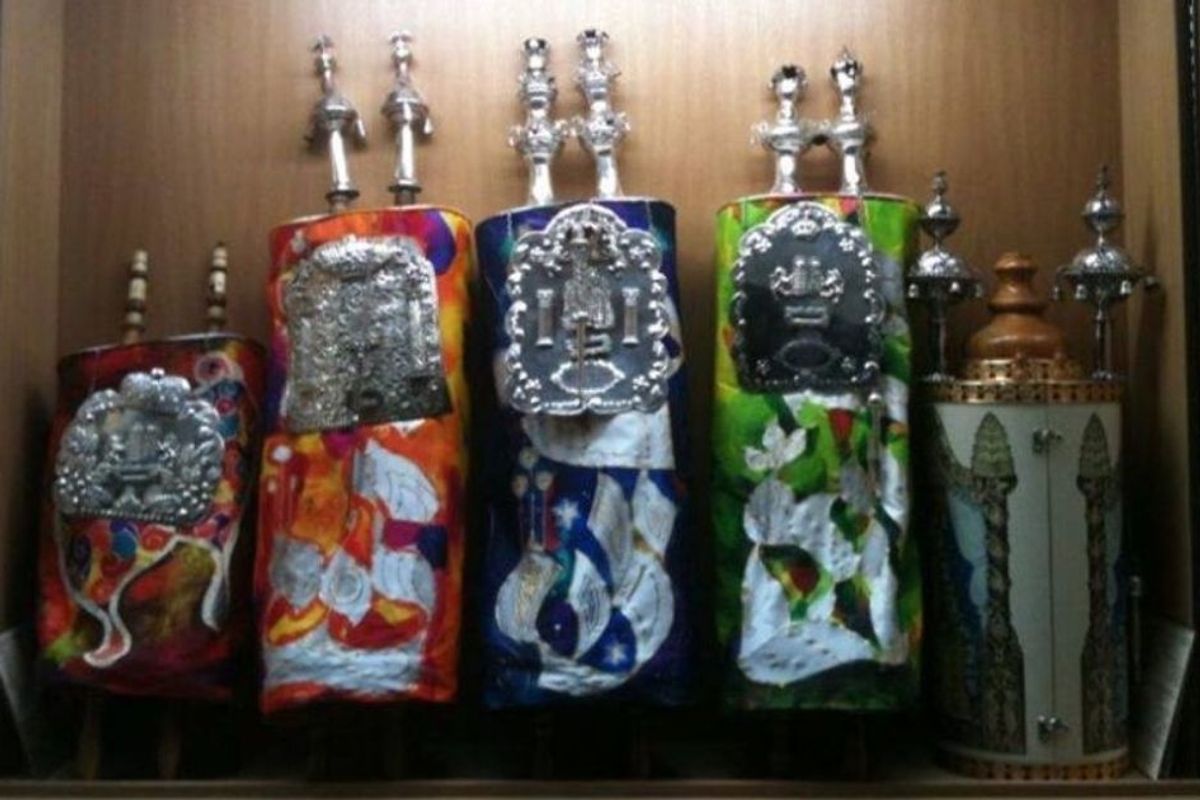 On December 15, 2019, a man broke into the Nessah Synagogue in Beverly Hills, CA in the middle of the night and vandalized it. Furniture was overturned, brochures and other papers were strewn about, prayer books and prayer shawls were destroyed, and parts of the sacred Torah scrolls were tossed on the ground.

The vandal has not been caught, but the incident is being investigated as a hate crime.

While desecration of a sacred book is always disrespectful, damaging or destroying Torah scrolls is a particularly weighty offense. Not only are the scrolls sacred scripture—they are also priceless, handmade, historic artifacts.

RELATED: A man was shouting anti-Semitic slurs at two children, so a woman in a hijab stepped in to stop him

Paige Leitman, a Jewish woman, explained in a viral Facebook post what makes a Torah unique among religious scripture, and why the loss of one Torah is a loss for all Jews.

"Damaging a Torah is not like damaging a bible, even an expensive and valuable one.

A Torah scroll is written, BY HAND, with a quill, and specially prepared ink on specially prepared animal hides. Every one. It takes a scribe the better part of a year to write it, and there are special calligraphic standards. They are not mass-produced. You won't find them in your nightstand in a hotel.

A Torah scroll is HELLA expensive. Many are literally priceless - as in no amount of money can buy them. They are gifted, loaned, and tracked carefully. A person doesn't own one - a person really can't. There are too few and they are too valuable for one person (generally speaking). A **congregation** owns one. ONE Torah for the whole congregation. Unlike bibles where each congregant may own many copies.

A Torah scroll is paraded proudly around the synagogue while people stand in respect and sing the special Torah-appreciation song. People reach out their prayer shawl or prayer book to touch it so it's not accidentally gotten dirty by someone's hand. People on the edges of the pews that touched the Torah "transfer" the touch by touching prayer shawls or prayer books to their neighbors and then kiss that book spine or prayer shawl because THAT is how important a Torah scroll is.

The Torah is so valuable that we do not touch the scroll with a hand while reading it. We have a special pointer stick, often with a tiny sculpture of a human hand at the end, made of metal or wood, to hold one's place in the line of text just so your hands don't accidentally get dirt on it, and so generations of use don't smudge the text.

The Torah scroll has specially made rollers to put it on, a special belt to put around it, a decorated velvet or brocade cover to put over it, and the gold and silver crowns are placed on the top of the rollers. Every one of them. ALL of them. It is a huge production to make. We literally put jeweled crowns on every Torah.

The Torah must be held in a special ark, which is a huge and valuable large cabinet. Every single one. You can't just throw it in a nightstand, a backpack, or a classroom.

The Torah is so spiritually important to us that we will never allow it to be in the dark. A special light burns in every sanctuary, never to be extinguished (nowadays with special generators in case of a power outage). My last name is Leitman, which meant my family were the people who showed up at the sanctuary in snowstorms, in the middle of the night, to make sure that light never went out. Just keeping the Torah under light is a job so important that it becomes a family legacy for the rest of the line.

In Judaism, you need a minimum quorum of ten Jews to have official prayers. The Torah is so important, it's considered as counting for a whole Jew so you need only 9 if you have Torah scrolls. (Note this is from family oral history, and the actual rabbinical ruling on this is not clear.)

Sure SOME folks are buried with bibles. However, when a Torah scroll is damaged beyond repair, the SCROLL ITSELF gets a full Jewish burial. Individual cemetery plot in a place of honor, a full headstone, a nice casket. Everyone shows up and mourns. It's a big honkin' deal and hugely expensive, but they are THAT important.

Anything less than this and a Torah is not considered kosher and may not be used in a synagogue. Yes, there are plenty of knock offs out there to buy that are machine printed, or not calligraphied appropriately, or whatever. But they're not real.

Please, I beg you, don't say a Torah is anything like a bible or that Torahs are treated like bibles are treated. Vandalism of Torah scrolls is a HUGE thing.

Ask three Jews a question and you'll get four opinions, it is known. Talk to your Jewish friends about how serious this is. A lot of us are really weary of the murders, the vandalism, and the blatant hate."

Unfortunately, the U.S. has seen a dramatic rise in anti-semitic hate crimes in the past few years. According to The Wall Street Journal:

In 2017, anti-Semitic incidents—including harassment, vandalism and assault, as reported to the league by victims, law enforcement and the media—jumped 57%, the largest single-year increase since the group began tracking such data in the 1970s. While 2018 was slightly better, it still had the third-highest total of anti-Semitic incidents the group has ever recorded, with anti-Semitic assaults more than doubling from 2017.

In addition, New York City, with the largest population of Jewish people in the U.S., has seen a 51% increase in anti-Semitic hate crimes so far this year compared to the same period last year.

But hate crimes are only the most obvious manifestation of antisemitism. Jennifer Rosen Heinz, a Jewish American woman, shared with Upworthy how she feels living in this time period as a Jew:

"There's anti-Semitism in America on the right and the left. There's anti-Semitism in even well-meaning support of Jews, Judaism, or Israel. It's never been so pronounced in my lifetime. I always thought that it existed in some deep, dank caves of America where people didn't know better. But to see that people who should know better don't... to see that repeated and propagated and developed, to see folks espouse these things openly, with some measure of glee... that has left me breathless."

RELATED: A Jewish mother's warning on migrant detention centers: "This is not just the start."

Heinz points to a recent executive order from the White House, which equates Judaism with the nation of Israel in the definition anti-Semitism, as one example of how Jewish historical trauma plays out in political discourse:

"Last week, when the NY Times published reporting about a proposed executive order which, on its surface, was announced to fight anti-Semitism, American Jews panicked. Because the details of what was being proposed were firmly aimed not at curtailing anti-Semitism, but in restricting political discourse in universities. It became apparent to me that most non-Jews had no idea why Jews were freaking out about this thing that, on its surface, seemed to them would be something we would support, that would protect us.

Yet defining Jews as on par with a race or nationality has historical precedent, and spoiler alert: It's all bad. Like, really bad. Throughout history, when other groups have sought to define us for political purposes, it's led to exclusion, anti-Semitism, expulsion, and genocide. These things are not academic words to a Jew. They are not history. They're a trauma which is encoded in our DNA. It may be quieted by long periods of peace and inclusion, but it's always, ALWAYS present in some form. Anti-Semitism feels like some virus which has been encased in arctic ice so long and is now let loose. Freed and activated.

Only those with personalized memory of what happened are sounding the alarm because we know the plot to this story. We know the virus has been relegated long enough, the general population's immune systems have forgotten how to fight it. But we remember. Our bodies remember. Anti-Semitism quakes our very cells."

Learning from history, and especially from those with personal ties to specific history, is important. As with any marginalized group, listening to the feelings and experiences of the people within that group—and believing them—is vital. And hearing the alarm when it's sounded—not after the worst has taken place—is how we keep human atrocity from being repeated in our lifetime.

The alarm is being sounded now.