A homeless kid's path crossed with a kind Starbucks manager. The rest is history.

Add sheer determination to a stroke of good luck and you get a double shot of humanity for the win! 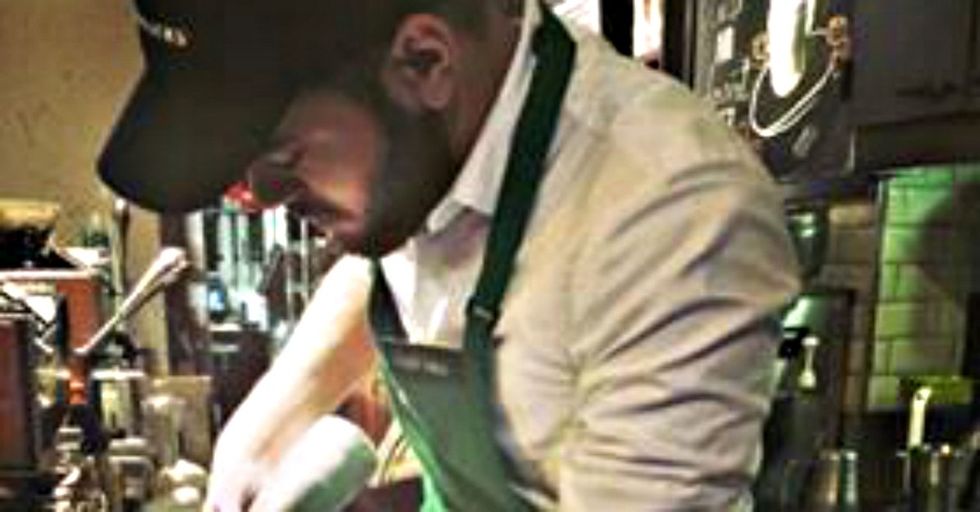 Matthew Tejeda has big plans for how he'll help others who started off like he did — with the odds stacked against them.

Having bounced around from home to home as a kid, relying on the help of friends and without the guidance of parents, Matthew had a rough transition into adulthood.

When school ended and he had no place to call home and no schoolmates' couches to crash on, Matthew was finally homeless.

Matthew, when younger, with a tiny friend. Images courtesy of Matthew Tejeda, used with permission.

A stroke of good luck paired with a tenacious drive to overcome his misfortune turned everything around.

According to Forbes magazine, a friend of Matthew's arranged an interview for him with a Starbucks manager, Debbie Dooknah. Debbie knew about Matthew's situation when she met him, and decided he was qualified and could do well if given a chance.

She trained him and kept his personal life between the two of them — she was the only one he worked with who knew he was sleeping in a shelter when he'd leave his work shift.

The room assignments at the shelter Matthew sought refuge in.

But it wasn't all smooth sailing for Matthew once he landed the job.

Matthew with his manager Debbie and a friend. She took him out to dinner for his birthday and took him shopping so he'd have something he could wear to a restaurant.

He had his work uniform stolen out of the laundry at the shelter, and he was unable to sleep at the shelter on the nights when it was loud.

He says a tenacious mindset is what helped him hang on.

"I just kept reminding myself that if I put one step after the other I could make it happen. My good friend Liz is an author of the NYTimes Best Seller 'Homeless to Harvard' and in one of her speeches she said 'What transforms a life? One empowered choice after the next over time.' I think that accurately described my thought process at the time. I knew what failure felt like and that absolutely wasn't an option."

Matthew also carried a key in his pocket every day. It was a talisman to remind him what he was striving toward — a home to call his own.

He eventually got his own apartment by saving his paychecks, along with a little help from a brilliant Starbucks program.

Starbucks partners (employees) who want to chip in to help other partners in need are able to do so through their "CUP Fund" (Caring Unites Partners). With that and his savings, Matthew was able to cover the deposit and first month's rent to move into his first home of his own.

The manager, Debbie, who took a chance on him, is now his best friend.

And now Matthew is working in real estate for NYC's renowned Corcoran group, but he still keeps shifts at Starbucks on the side because he loves it so much.

He plans to use his experiences, and what he learned from Debbie, to help others.

"In our hearts lies the key to change and growth, if we can unlock that we can help others accomplish amazing things. It is my dream to eventually give back and completely alter the lives of youth who have been cast aside, abandoned or written off.
Within their pain there are reservoirs of ambition and passion waiting to be tapped into and if you manage to get through you help not one but many more, as that person will likely go on to help others."

Leaders who empower others are exactly what the world needs more of.

The good you do for others can multiply in ways you'd never imagine.

This isn't just the story of one guy who caught a lucky break and overcame his lot in life. And no, not every person who finds themselves homeless will be so lucky or have the able body and mind to do what Matthew did, for a variety of reasons.

But it is a clear reminder to those in a position to be instrumental to others — in any way — that we can use our powers for so much good as long as we look out for those opportunities when they come.