A gay man in Vegas was approached by a 40-year-old stranger asking for advice on raising his son. 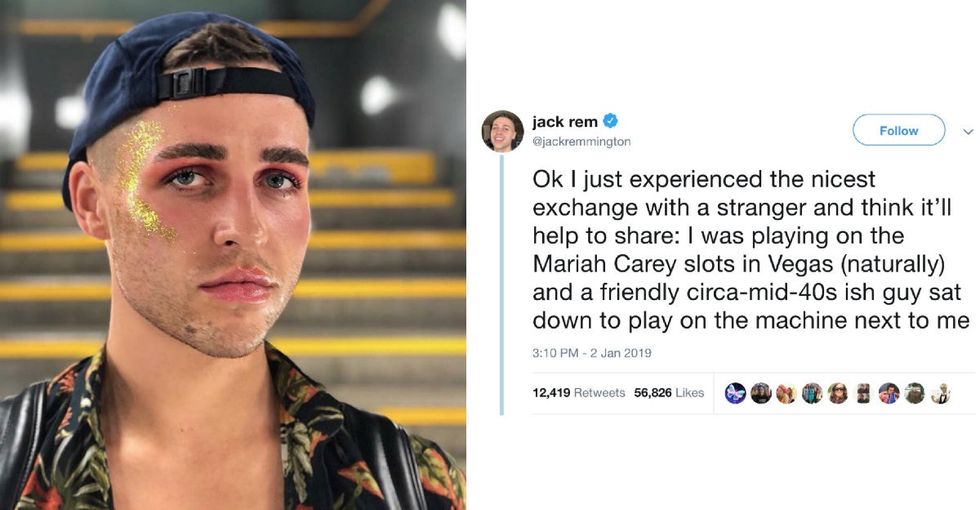 Jack Remmington got a surprise he says he’ll never forget.

While playing the slots in Vegas he and his friend were approached by a middle-aged man they had never met who wanted to know if they were gay. Although it was a relatively safe public space, you never know what might happen in a city fueled by alcohol, sex and gambling.

Instead, the man who approached Remmington wanted to ask some perfectly wholesome advice about communicating with his young son whom he thinks is probably still in the closet.

Remmington wrote about the interaction on his Twitter page and the breakdown has quickly gone viral for the best reasons.

“Ok I just experienced the nicest exchange with a stranger and think it’ll help to share: I was playing on the Mariah Carey slots in Vegas (naturally) and a friendly circa-mid-40s ish guy sat down to play on the machine next to me,” Remmington wrote.

Ok I just experienced the nicest exchange with a stranger and think it’ll help to share: I was playing on the Maria… https://t.co/cR1kUmRF6v
— hbd miranda x (@hbd miranda x)1546459800.0

I was sitting with @marcoalessifilm, both wearing pink (naturally) and after chatting a little to the guy about Vegas, he nervously asked if he could ask us a question. I knew where this was gonna go as it always does so did a bit of an inner eye roll but indulged him anyway

He then asked if we were together so we said no (we’re best friends and he has a fab bf) and he asked if we were gay, so we said yes. He then said he thinks his 13 year old son might be gay and wondered if he could ask us how best for him to navigate that

He lit up when talking about his son, and I nearly started crying at how much he clearly loved him. The guy wanted to know how to make his son feel most comfortable about himself whilst not being too overt and glaringly obvious in forcing a conversation about his sexuality

This man is SO sweet. From rural Arkansas and said whilst things are so much better now, he still just wants the world to be totally equal for his son. Marco and I said he sounds like he’s doing all the right things and that making his son know he’s loved is the best he can do

We both gave a couple of anecdotes from personal experience, largely relating to condoning abstract things when you see them like normalising conversations around gay kisses on TV or calling our family conversations that might shame potential queerness

We also mentioned not accidentally policing things so as to shame him - for instance, often out of a sense of protection and love parents can frown on a child’s behaviour or outfit because they’re worried for their safety when on a night out etc.

But we stressed that if this was their feeling it’s important to vocalise this exactly, rather than leaving the child ruminating over the parent’s intentions and second guessing why they said what they said

So in terms of advice to friends or relatives of a potentially queer person, what would fellow queers advise is the best way to make it known they have their love and support without causing an uncomfortable conversation that might force someone to come out before they’re ready?

You can read the whole thing on Remmington’s Twitter thread, here.

While it’s understandable that he and his friend were apprehensive about being approached, the exchange goes a long way toward showing we should never make too many hard assumptions about people based on their appearances alone.

Even in 2019, not every parent, child or friend has a safe space to educate themselves on LGBTQ issues.

Obviously, it would be ideal if this random guy had a friend, family member, or educator who could give him the advice he was looking for but we have to salute Remmington for being so generous and kind in his response. There’s so much we can learn from each other when we take the time to ask questions -- and listen.

“My first impression was that he seemed nice as he chatted which is more than what tends to happen with people you sit next to in Vegas at the slots. That said, I didn’t expect it to take this turn at all,” Remmington said in an interview with Bored Panda.

“The relationship between him and his son has a 100% future – he was a wonderful and caring man, despite what he said was quite a difficult town to grow up in if you’re at all different. I wish all fathers could be like him.”