A depressing trend is emerging from our collective reaction to mass shootings. 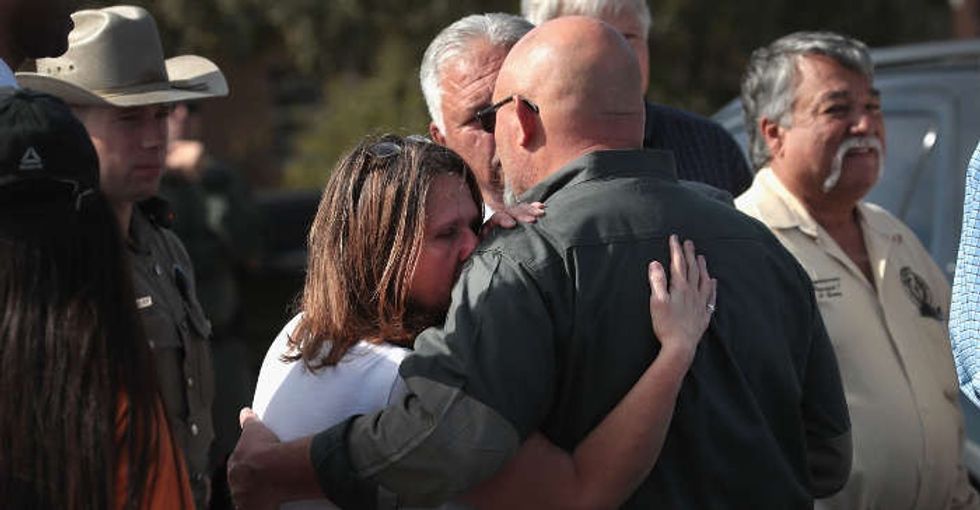 Remember the shooting in Texas?

By the time you read this — a month later? A week later? Perhaps just two days later — what happened in Sutherland Springs will be a fading memory (where is Sutherland Springs, again?). We'll have mostly forgotten those who lost their lives and why they aren't here anymore. We won't remember that the youngest victim was 18 months old. Or that the oldest was 71. Or that an entire family of nine was nearly completely wiped out in the blink of an eye.

It wasn't always this way. In April 1999, when 13 students and teachers were shot and killed at Columbine High School, we didn't forget for months. There were articles, speeches, protests, magazine covers, and calls for legislation. There was even a documentary. It came out three years later. We remembered so well that documentary made over $50 million.

Two years ago, a Washington Post investigation of Google Trends found that our interest in mass shootings now lasts about a month, sometimes even less.

That study was prompted by an attack at a community college in Oregon in October 2015, which of course, almost no one — except those immediately touched by it — really remembers.

We've already moved on from the shooting in Las Vegas. That was a little more than a month ago. Cable news lost most of its interest in 10 days.

There will be other news to distract us. There will be Election Day drama. There will be frightening violence in the Middle East. Donald Trump will have said something bizarre about samurai warriors.

We will have performed the entire public grief cycle in record time. Thousands will have risen up and demanded stricter gun laws. Gun rights advocates will have argued we should "enforce the gun laws we already have" and asked "are you going to ban knives and fists next?" We will have found out about the shooter's history of domestic violence. Conservative politicians will have blamed the shooting on mental health. Liberal commentators will have accused conservative politicians of hypocrisy on mental health. Responsible gun owners will take umbrage at being lumped in with killers. Chris Murphy will have written a righteously indignant viral tweet. There will have been a rumor that a good guy with a gun raced in to save the day. That rumor will have turned out to be only partially true. The parents and families of people killed in previous mass shootings will have trudged back out to share their stories of the worst days of their entire lives in the hope that maybe something will be different this time.

But that's likely coming to an end, as you read this. Or it's already over. Life is probably going on. We're already worried about something new. And we're bracing ourselves for the next one.

As the drumbeat of bad news gets faster, we feel our ability to be horrified slipping away. We notice ourselves reluctantly, but inevitably adjusting to a reality where watching two dozen people die in church is normal. We might even hear 10 people are killed at the office, in a park, or a baseball game and think, "That's not that many."

"There are some people who just sort of start to let it in that this is part of the world that we're living in," Sharon Chirban, a Boston-based psychologist who treats patients suffering from anxiety and post-traumatic stress, told me over the phone. "And in some ways, it's probably more adaptive to probably be thinking that way."

It's how we go on with our lives without digging ourselves deeper into a pit of despair with each new mass shooting. In some ways, it's healthier to forget.

"People sort of restore what's called 'functional denial,'" she says. "We need that in order to basically live without acute anxiety."

It's an awful Catch-22. If we allow ourselves to grow a little less surprised each time this happens, we can't be hurt when it inevitably does again. But lose our ability to be shocked and with it goes our drive to fight for change.

And that's the scariest part.

Most of us (around two-thirds of all Americans) don't own a gun. Still fewer of us actually carry one. We'd rather risk random injury or death than live in such a state of fear that we feel the need to tote around a deadly weapon at all times. Yet, there are millions of others for whom owning a firearm or two or 20 is an integral part of who they are. Maybe we can't all agree on exactly how to solve this problem and maybe we never will. But there are a few things an overwhelming number of us want to change. 90% of us want background checks for all gun sales. 79% support banning bump fire stocks that allow semiautomatic rifles to approximate the function of a fully-automatic weapon. Nearly 60% of us want to ban assault weapons, the kind used in nearly every mass shooting of the past decade.

No one knows how we get that done in the face of the inertia born by a cycle of a million "more important" things and the grinding, scorched-Earth opposition that will inevitably follow. But if we shrug and throw up our hands, we never will.

On Monday morning, writer Clint Smith wrote that he can't help think about what the victims were doing the morning before the shooting. Ordinary things. Human things. Having no idea what was about to happen.

Something tht always breaks me about mass shootings is thinking how the victims woke up, made breakfast, tied their shoes like any other day
— Clint Smith (@Clint Smith)1509977300.0

It’s a tragic illustration of what can be ripped away in a split second by an asshole with an axe to grind and a semiautomatic rifle on his hip.

Perhaps that’s the only way to shock ourselves back into reality. To remember that this didn’t used to be normal. It's still not normal. And can and should be stopped.