A 6-year-old has raised more than $260,000 for Australian wildlife selling his handmade clay koalas 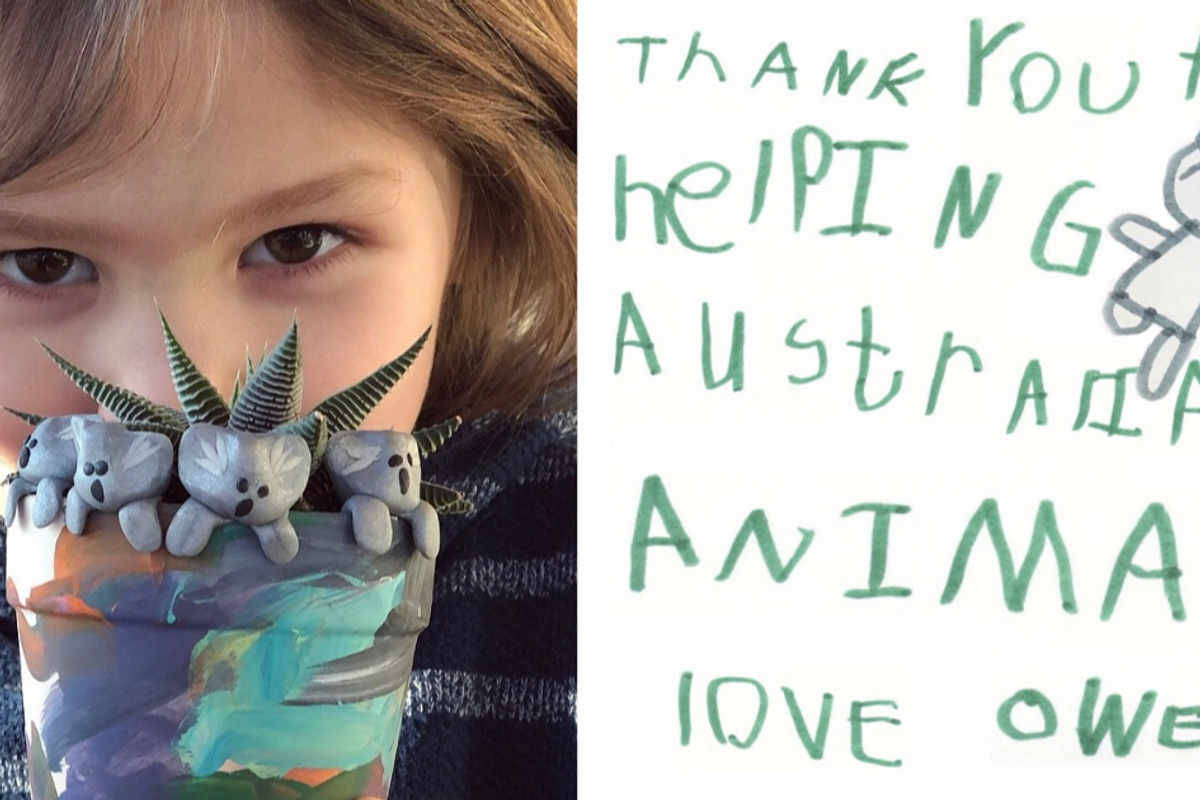 Owen Colley, age 6, started his clay koala project with a goal of raising $1000 for the animals affected by Australia's unprecedented bushfires.

That was two weeks ago. As of this morning, the kindergartener has raised more than 250 times that amount, and the total is rapidly climbing.

Owen is an American and lives in Massachusetts. But his father, Simon, grew up in Sydney and the family lived in Australia for a few months when Owen was a toddler. His mother, Caitlin, told CNN that Owen was saddened to hear about the animals who had been hurt in the fires, so he drew a picture of a kangaroo, koala, and dingo in the rain—a representation of his wish for the land down under.

RELATED: A 6-year-old designed a custom t-shirt for his first day of school and it's seriously the best

"It was really the first time Owen had made a wish for something other than Lego or something other than himself," Caitlin Colley told CNN. "We asked him if he wanted to help and ... together we came up with this. We could make some clay koalas and give them in response to donations from friends and family."

They decided that anyone who donated $50 or more to Wildlife Rescue South Coast would receive one of Owen's handmade clay koalas. He set an initial goal of $1000 and met it. But donations kept coming, so the family set up a GoFundMe with a goal of raising $5000. They've since blown way past that goal, hitting the $264,000 mark as of today.

The Colleys posted the following update to the GoFundMe page last Friday, when they had almost reached $200,000.

We had our first koala party today - 14 friends ranging in age from 3-67 trialing the best tricks for koala production. Success! We went through 10 packs of silver Sculpey III and Sculpey has more arriving for us on Tuesday - we'll be out chasing the UPS truck! Thank you, Sculpey!!

Accutech has offered custom packaging and we are so excited to get creative with them! I won't give it away, but our packaging will be competing with your clay koala in the cuteness department. We are soo grateful they reached out.

Thanks for following along! We hope you're all enjoying your weekend - we sure are!

And as of this weekend, they've had to announce that they simply won't be able to keep up with the demand, but people are still welcome to donate to the cause.

Update on clay koalas - please read before you donate!! As this campaign continues to soar beyond what we ever thought possible, we unfortunately need to limit the number of clay koalas we commit to making and sending. As such, we will not be able to say "thank you" with a koala for donations received after 11:59 pm PST, Sunday, January 19th. With this said, all donations are still greatly appreciated!

Thank you ALL for helping a little boy do a BIG thing - Owen wishes he could send a clay koala to everyone in the world! We are so proud of this little boy and his kind.

The US Consulate in Sydney has even recognized Owen's efforts, with the help of William Shatner.

Owen Colley on Instagram: “And then the dream started getting pretty surreal...not only were we making thousands of koalas out of clay, but The US Consulate of Sydney…”