8 weird, cool, and downright dangerous facts about fireworks for your Fourth of July. 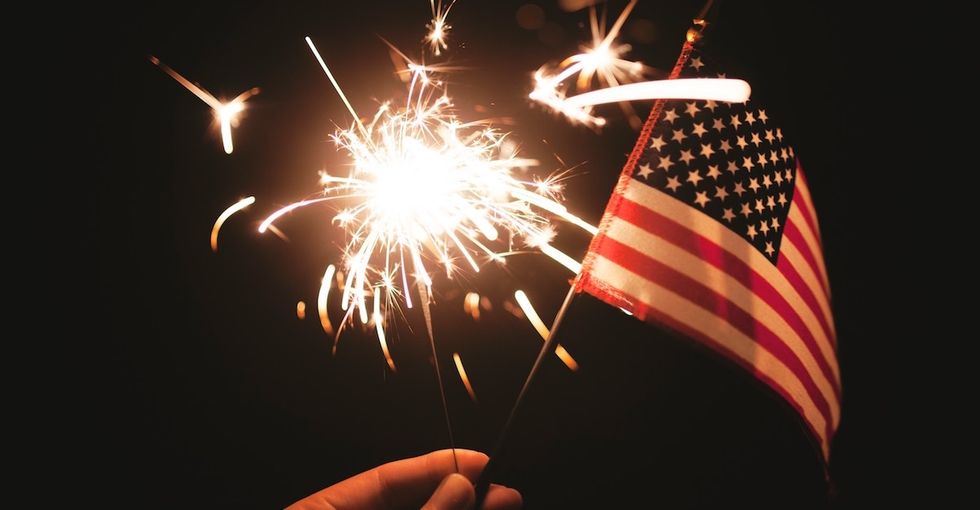 This article originally appeared on 07.03.18

In the eyes of many Americans, the Fourth of July is a day for parades, barbecue and, of course, fireworks.

But why is it that we celebrate Independence Day with explosives?

The tradition got its start at the beginning of our nation's history after the Founding Fathers met in Philadelphia to write and sign the Declaration of Independence.

A day after the Second Continental Congress approved the declaration on July 4, 1776, John Adams — soon to be the second U.S. president — penned a letter to his wife Abigail, declaring that Independence Day "ought to be solemnized with pomp and parade, with shews, games, sports, guns, bells, bonfires, and illuminations from one end of this continent to the other from this time forward forever more."

One year later, in 1777, Philadelphia celebrated the anniversary with fireworks (which Adams dubbed "illuminations") plus a parade.

But while their American origin story is interesting, that's not all when it comes to forgotten or overlooked facts about fireworks. Before you head to the backyard barbecue to set off a few with the fam, brush up on your fireworks facts to impress your friends.

1. Currently, Americans are shooting off almost one pound of fireworks each year for every person.

This figure has grown rapidly from half a pound in 2000. In 1976, the United States' bicentennial, the figure was just one-tenth of a pound annually.

One reason for the big increase is a steady reduction in state prohibitions against individuals using fireworks.

2. Fireworks are allowed in Iowa — but they can only be exploded on the few days around the Fourth of July, Christmas, and New Year's Eve.

It's one of the more recent states to allow fireworks, but you'd better read the fine print before setting off a display in the off-season!

3. By 2016, professional displays comprised less than 10% of total fireworks usage.

Because states are now permitting individuals to purchase and possess fireworks, there has been a large shift from professional to amateur use. Back in 2000, roughly one-third of all fireworks hurled into the sky were done for professional displays, the kind that light the skies of cities around the world on holidays like New Year's Eve and national celebrations.

That also means, pound for pound, fireworks are about half the price of the frankfurters many people are grilling this Fourth.

Since 1986, injuries have steadily fallen as government regulations made them safer.

6. But as states have relaxed restrictions, the injuries have started increasing again. The latest figures for 2016 show a rate of 3.4 people per 100,000.

Beyond such statistics, however low, every year there are horrible stories of both children and adults being injured and killed. So it's always important to exercise caution when lighting what amounts to a low-yield missile.

One reason that injury rates have fallen in the first place is because of the federal government's Consumer Product Safety Commission. It banned the sale of the most dangerous fireworks, like M-80s and cherry bombs, in the 1960s.

Today, it is working to lower injury rates again by requiring manufacturers to adhere to higher standards. For example, faulty fuses have caused many injuries by burning either too quickly or too slowly.

8. All fireworks fuses are now required to ignite three to nine seconds after being lit.

The commission also now requires fireworks to have bases that are wider and support more weight so they do not tip over and fire horizontally.

It also now bans hazardous materials like lead from the powder inside fireworks so that people downwind from the explosions don't get poisoned by breathing the smoke.

But if you do plan to light a few rockets or more advanced fireworks, use some common sense, especially if children are around.

Whether you are lighting fireworks, watching them explode above you, or just hiding from the noise, try to have a fun and safe Independence Day!

Jay L. Zagorsky is an economist and research scientist at Ohio State University. This article was originally published on The Conversation. Read the original article.

Update 7/5/2018: The previous version of this story was altered as to fireworks laws that had changed since it's first original publication.

As educational as it is adorable.

On her TikTok profile, Katie Norregaard (aka Miss Katie) describes her brand as “if Mr. Rogers and AOC had a kid.” And it’s 100% accurate. The teaching artist has been going viral lately for her kid-friendly tunes that encourage kids to learn about other cultures, speak up for their values and be the best humans they can be.

Let’s face it, some kid’s songs are a tad abrasive with their cutesiness, to put it politely. A certain ditty about a shark pup comes to mind. Norregaard manages to bypass any empty saccharine-ness while still remaining incredibly sweet. The effortless warmth of her voice certainly helps with that. Again, she’s got that Mister Rogers vibe down to a tee.

“Miss Katie” has a treasure trove full of fun creations, such as her jazz version of “The Itsy Bitsy Spider,” but it’s her “Chinese Dumpling Song" that’s completely taking over the internet.
Keep Reading Show less
wholesome tiktoks
Pop Culture