5 things the writers of 'Will and Grace' should consider before the upcoming reboot. 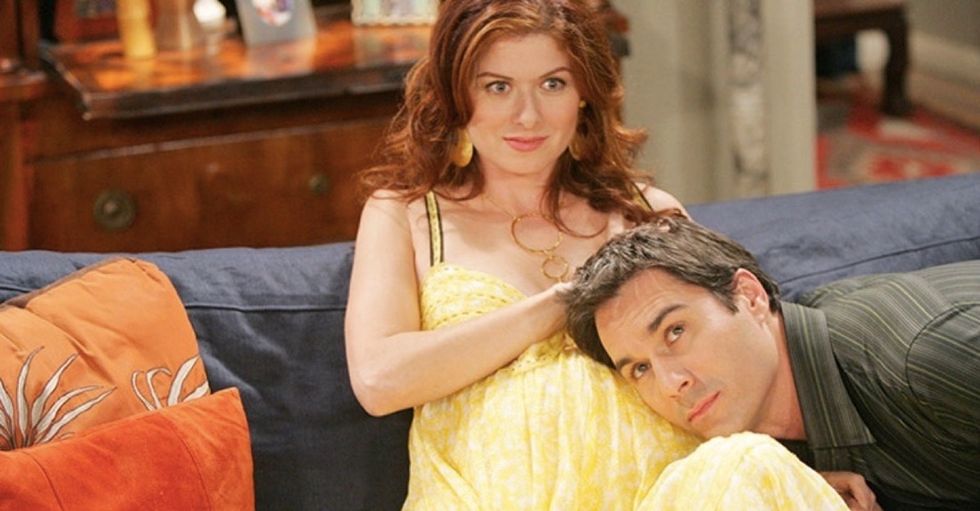 "Will & Grace" is returning to TV for a limited 10-episode run.

The show debuted in 1998, near the end of what Entertainment Weekly dubbed "The gay '90s." It was another effort for NBC to capitalize on what Miami University media professor Ron Becker dubbed "the Slumpy class" — socially liberal, urban-minded professionals. Through eight seasons and more than 180 episodes, that's exactly what "Will & Grace" did.

If you missed "Will & Grace" the first time around. Here's a refresher.

Will (Eric McCormack) and Grace (Debra Messing) are a former couple turned best friends turned roommates. Will is gay and an attorney. Grace is straight and an interior designer. The cast is rounded out by Jack (Sean Hayes), their flamboyant friend who dreams of stardom; Karen (Megan Mullally), who is technically Grace's assistant but usually gets intoxicated and hangs out; and Rosario (Shelley Morrison), Karen's loyal maid. They laugh, they cry, shenanigans ensue, they fall in and out of love, the audience laughs really, really loudly: It was sitcom gold.

Though the show was campy and silly, it was pretty groundbreaking at the time.

When the show began, Will was the only gay character leading a show on prime-time TV. His sexuality wasn't mentioned in early promotions for the show (apparently even promoting to "the Slumpys" had its limits), but as the show went on, it broke new ground not just for having a gay lead but for the issues it raised.

From the episode "Whatever Happened to Baby Gin?" in Season 8. Photo by Chris Haston/NBC, courtesy of the Everett Collection.

In the first season episode,"Will Works Out," Will has to deal with his own homophobia after calling Jack a fag at the gym. Later in "Acting Out," Jack and Will go down to the "Today" show to protest a gay kiss being cut from an NBC show, and they end up kissing each other. Will gives boyfriend Matt (Patrick Dempsey) the boot after he won't come out of the closet at work in "Brothers, a Love Story."

For every affirming, innovative moment, there was camp. After all, it was first and foremost a screwball comedy. There were Cher and Madonna walk-ons. There were jazz hands. There were constant reminders for viewers that they were, in fact, watching a "gay show," even if the representations were mostly "safe" and unthreatening to the general public.

It's been over 10 years since the show ended its eight-season run, and needless to say, a lot has changed.

Since we last saw the "Will & Grace" gang, gay marriage has became legal, bathroom bills have made their way across the country, and we've elected a president whose early appointees already have a lackluster track record on civil rights.

So if "Will & Grace" wants to remain as edgy, relevant, and frankly funny as it used to be, here are five things the reboot needs:

1. Get some friends of color in the mix.

They live and work in New York City. How hard is it for Will and Grace to have some black friends? This doesn't mean they should pull a "Gilmore Girls" and flood the background with black and brown actors. I mean real speaking parts with some character development. People of color can hang with the gang too, and it doesn't have to be stunt casting. (But the writers will have to get rid of cheap shots about confusing Mexicans and Salvadorans.)

The white background is really just overkill at this point. Photo by George Lange/NBC.

2. Can we move away from food-shaming Grace?

Grace loved to eat. It was kind of her schtick. There is absolutely nothing wrong with enjoying food, but Grace's fondness for food was played up as a character flaw. She was portrayed as an almost gluttonous, emotional eater, unable to resist any snack sent her way, especially when she was down in the dumps. Yet, she remained slim and trim because while "Will & Grace" was considered envelope-pushing TV, a fat woman was considered a bridge too far. It was an infuriating aspect of the show.

As Sadie Stein wrote for Jezebel, "It says, 'I may look glamorous, but I have the mind and soul of a fat person! And this is hilarious!' Not incidentally, this also plays into that old male fantasy: the un-neurotic guy's girl who can chow down on a steak and still look like a centerfold."

In the late '90s, it was enough to just have gay characters on TV. The bar has been raised. Time for "Will & Grace" to move beyond the one-note representations of Will and Jack and include more diverse portrayals of the LGBTQ community. A gender nonconforming yoga instructor? Can Grace date a bisexual guy? You see where I'm going. And ideally, those actors would be gay, trans, or nonbinary in real life. One can dream.

The show can still be silly and funny, but let's up the inclusivity and think about the types of people falling in and out of love or being the butt of the joke. AV Club writer Joe Reid said it best in his piece on the show's legacy, "For any show about gay men in a world that is steadily allowing them to exist outside the closet, it’s important to investigate the self-policing that was (and still is) happening regarding butch, 'masc,' and femme portrayals."

4. Let's let Jack and Will be sexual beings.

On a similar note, gay characters can kiss, flirt, make out, have sex, hook up, enter long-term relationships, and in general have sexual agency. Too often, Will and Jack were essentially neuters with punchlines. If the character is gay, let them be gay and give their romances and relationships the time and weight they deserve.

Eric McCormack and Sean Hayes in Season 6. Photo via NBC, courtesy of the Everett Collection.

5. The gang can (and should) challenge President Donald Trump and his agenda.

To be fair, they've already kinda started. The cast reunited for a mini-episode last fall all about the election, but they're in a unique position to go further. In the late '90s, people saw "Will & Grace" as irreverent and subversive. If there's ever a time to resist the status quo, it's now. The 10-minute video should serve as a comedic warning shot to Trump and his ilk: If you insist on appointing, hiring, and amplifying voices of hate, then no place will be safe for you. Even prime-time network comedies.

So welcome back, "Will & Grace." I await your reboot with an open mind.

I just hope you're coming back with a story we haven't heard before. Otherwise, stay just what you are: A lighthearted, irreverent, sometimes boundary-pushing sitcom that was just fine where we left it ... in 2006.

Photo by George Lange/NBC, courtesy of the Everett Collection.