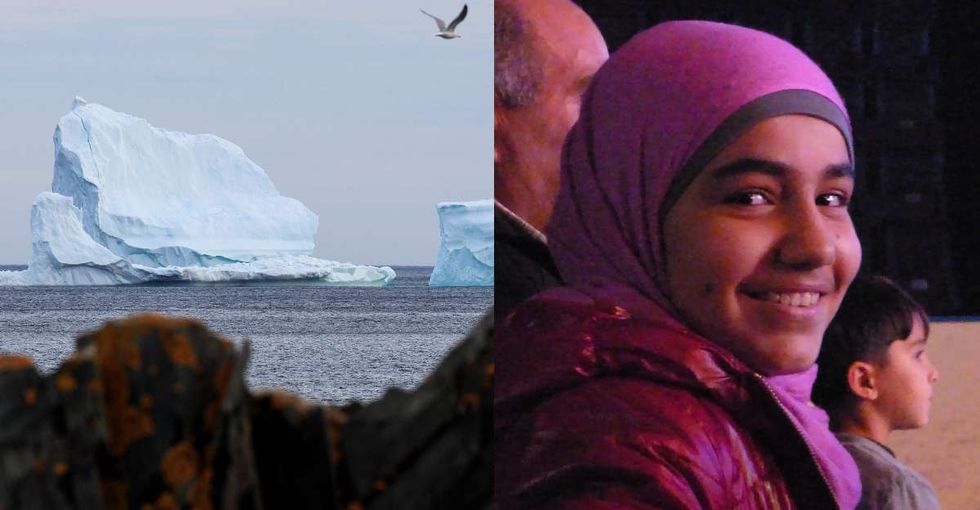 On Sept. 21, 2016, after enduring the terror of the Syrian civil war, a year living as refugees in Turkey, and almost 27 hours of flying, Samah Motlaq, her husband, Talal, and their two young children touched down in the small lakeside community of Gander, Newfoundland, on the east coast of Canada.

An iceberg floats off the coast of Newfoundland. Photo by Drew Angerer/Getty Images.

Motlaq was unsure about leaving Turkey. She liked her life there, and her kids were finally settled after years of uncertainty and upheaval. But their family had friends in Gander who urged them to join them halfway across the world.

"Honestly, all I knew about Canada is that it is very cold in winter but [that] the opportunities for living [were] much better than in Turkey," Motlaq says.

Still, she wasn't sure how welcome her family would be in a small town and foreign culture in a country she'd never visited. Little did she know that welcoming newcomers had long been Gander's brand.

15 years earlier, Gander played host when nearly 7,000 airline passengers were grounded there on the morning of Sept. 11, 2001.

When American airspace was closed following the attacks on New York and Washington, D.C., 38 planes were forced to land in the town, whose airport is home to one of the largest runways in the area — a legacy left over from an era when aircraft had to make frequent refueling stopovers on their way to and from Europe.

With nothing but their hand luggage, travelers from six continents stepped off their planes to find food, clothes, shelter, and community waiting for them.

Stranded passengers from around the world email their relatives from Gander Academy on 9/11. Photo by Scott Cook/The Canadian Press.

Since opening its doors that day, the town has been profiled in countless articles, a Tom Brokaw documentary, and even a new Broadway musical — "Come From Away."

In 2016, Gander opened its doors once again.

For many residents who helped the stranded passengers in 2001 by preparing meals, donating the contents of their closets, and taking them into their homes, welcoming refugees displaced by war in Syria was a no-brainer.

"I really think that this has been the most rewarding experience of volunteering since 9/11," says Diane Davis, a retired elementary school teacher in Gander and a member of the committee coordinating the resettlement.

Davis, who along with several of her fellow teachers inspired a character in "Come From Away," helped launch the committee in early 2016 with the goal of bringing five Syrian families to Gander.

13-year-old Wiaam Maymouna watches the performance of "Come From Away" in Gander on Oct 29. Photo by Diane Davis.

In early June 2016, the committee received notice that the first family would be arriving in just two weeks. Thus began a mad dash to ensure the houses were fully furnished and stocked with food before they arrived.

"We felt as if we are at home from the very first moment," Motlaq says. Hers was the fourth family to arrive in town — with a fifth still on its way.

The members of the committee were used to scrambling. Just about every person on it, Davis explains, had been involved with housing, feeding, and transporting the "plane people" on 9/11.

"One day after the attack, an old lady came to me at my workplace at Walmart and she hugged me and said, 'Do not be afraid. We love you and we are with you guys.'"
— Samah Motlaq

"I’ve been able to explain to [the refugee families], 'You’re not the first people we’ve helped,'" she says. "'This is the way a community works together. These are the kinds of things we take care of.'"

Resettling the families in Gander, Davis explains, is also an opportunity to revitalize the town, which has evolved into a "retirement community" in recent years.

As a former educator who lives across the street from her old classroom, Davis has taken the lead in getting the refugee children, who range in age from 2 to 13, adjusted to their new school.

"I retired in June on a Friday and the first family arrived on a Tuesday. So retirement was three days long," Davis says.

Her role involves everything from translation to registering the kids for classes to liaising with the parents in case of emergency. When one boy was getting in frequent trouble because he couldn't ask for help, Davis wrote her phone number in his notebook and, with the help of Google Translate, explained that whenever he needed anything, he could show it to his teacher.

For Motlaq, who was born in Palmyra, Syria's cultural capital, living in quiet Gander has been an adjustment from big-city life.

While she misses the activity, she is grateful for her new job at Walmart and the safety, quiet, and fellowship of the community — particularly after a deadly shooting that claimed six lives at the Islamic Cultural Center in Quebec.

"One day after the attack, an old lady came to me at my workplace at Walmart and she hugged me and said, 'Do not be afraid. We love you and we are with you guys,'" Motlaq says.

The conversation left her with a profound affection for her new adopted home. "I knew that day that Canada represents humanity and equality regardless religion or race."

Five months before "Come From Away" opened on Broadway, the cast and crew flew to Newfoundland for two VIP performances in the Gander hockey rink.

Diane Davis and partner Leo McKenna at the premiere of "Come From Away" in New York City. Photo by Diane Davis.

Before the show arrived, Davis asked Irene Sankoff, the musical's co-writer, for tickets for the eight Syrian adults. The production responded with tickets for all four families, including the children.

Explaining the concept of the performance to the newcomers, many of whom have limited English skills, was a challenge at first.

"They weren’t sure if they were going to see a hockey game," Davis says. After showing them pieces of the NBC documentary, they began to connect their experience to that of the "plane people" 15 years earlier.

The group also met the cast and creative team of the show — many of whom continue to support the resettlement effort with financial aid and, this past December, a trove of Christmas gifts.

"Santa Claus brought [the kids] sleds this year," Davis says. "That may or may not have come via New York."

For the families just finding their footing, the support has been invaluable. But for those who do speak English, like Motlaq and her husband, it was the performance, with its message of finding community amid chaos, that resonated the loudest.

"It is similar to our story," she says.

"We came from away too."