46 years ago, Buzz Aldrin drank wine on the moon — but that wouldn't happen today. 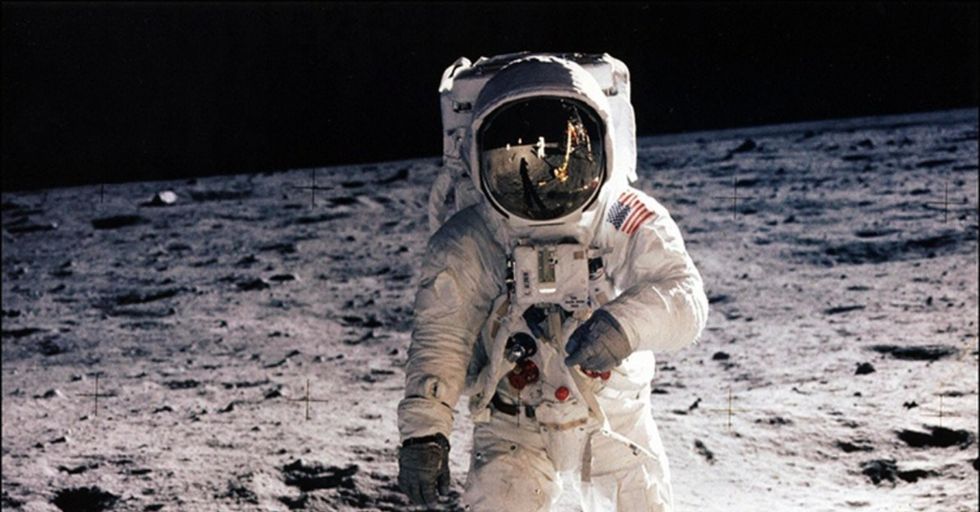 Shortly before exiting the lunar lander, Aldrin radioed back to Earth with a simple request: "I'd like to take this opportunity to ask every person listening in, whoever and wherever they may be, to pause for a moment and contemplate the events of the past few hours and to give thanks in his or her own way."

Neil Armstrong took this picture of Buzz Aldrin on the moon. Image by NASA/AFP/Getty Images.

And with that, his radio went silent for a moment, as planned. But Aldrin, himself, did not.

The astronaut broke out a home communion kit he brought with him, said a prayer, took a bite from a communion wafer, and poured himself a little wine.

During the brief respite from extraterrestrial communications, the astronaut broke out a home communion kit he brought with him, said a prayer, took a bite from a communion wafer, and poured himself a little wine.

NASA kept this a secret for years, fearing that those who objected to the perceived mixing of church and state would complain. (At the time, there was a pending lawsuit stemming from a reading from Genesis as the Apollo 8 mission orbited the moon.)

The idea of alcohol on the moon, however, was fine — for a few years, at least.

A NASA food scientist named Charles Bourland was charged with developing a beverage list of sorts. And that included wine — wine that was supposed to be sent up to Skylab, an early space station. Gizmodo explained:

"After consulting with several professors at the University of California at Davis, it was decided that a sherry would work best because any wine flown would have to be repackaged. Sherry is a very stable product, having been heated during the processing. Thus, it would be the least likely to undergo changes if it were to be repackaged.

The winner of the space sherry taste test was Paul Masson California Rare Cream Sherry. A quantity of this Rare Cream Sherry was ordered for the entire Skylab mission and was delivered to the Johnson Space Center. A package was developed that consisted of a flexible plastic pouch with a built-in drinking tube, which could be cut off. The astronaut would simply squeeze the bag and drink the wine from the package. The flexible container was designed to be fitted into the Skylab pudding can."

But, unfortunately for wine-loving astronauts, the special sherry never made it into orbit or beyond.

In the summer of 1972, Dr. Malcolm Smith, NASA's Chief of Food and Nutrition (and Bourland's boss) told the press about the space wine. The public reaction was less than supportive, with many people disapproving of the use of alcohol among their heroes in spacesuits.

About a week or so later, higher-ups at NASA issued the memorandum seen below.

The memo that ended space wine. Image was a faxed response to a FOIA request.

The memo (larger version here) addresses the discussions around the "fruit beverage (wine)," and the administrator concludes the drink won't be available on Skylab. In part, the administrator reached this decision due to the fear of "continued criticism and ridicule throughout the Skylab Program if such a beverage is provided."

Since then, wine hasn't been sent skyward — at least not for drinking purposes.