3 dire reasons why I'm so mad the debates didn't bring up climate change. 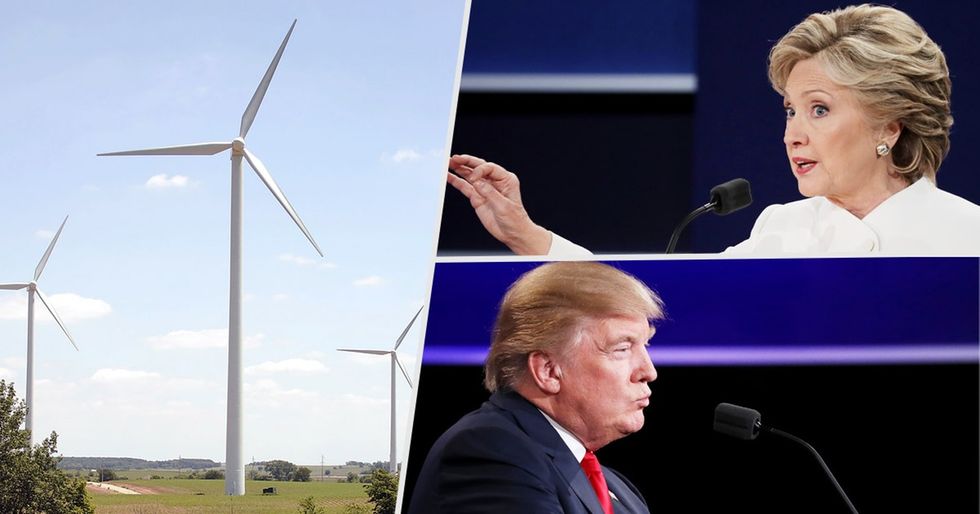 The epic, dramatic three-part saga known as the presidential debates is finally over.

They were some of the craziest debates we’ve ever seen, but one glaring, ozone-sized hole stood out: climate change. None of the moderators asked about it.

Here's the thing: Climate change factors into nearly every topic the candidates spoke about. Climate change is about our planet, about conflict, about health, about science, about jobs, about international relations — so it's wild that we didn't hear about it at all. As science-loving dudes, we're frustrated.

In honor of the debates ending, here are some examples of why talking about how our planet is changing really, really matters. This is the stuff that should have been discussed:

Take national security and the refugee crisis, for instance.

Our politicians may still be making up their minds about the validity of the warming of our Earth (real talk: Scientific consensus around this is real. It's not a political issue.), but our armed services divisions are already calling climate change a "threat multiplier" and "accelerant of instability." They're integrating it into all their plans.

What does an "accelerant of instability" mean? Take the Syrian refugee crisis: The conflict in Syria is a massive, messy tragedy, but climate change played a role in at least part of it, according to Columbia University professor Marc Levy. Severe drought and ruined crops — both potential effects of climate change — exacerbated Syria's already unstable system prior to the crisis.

The rest of the world is not immune, either. There are already climate refugees in places like Kiribati, Vanuatu, and, yes, even the United States.

OK, that was one thing, but there was another big topic on everybody's mind: jobs and the economy. Well, guess what...

Climate change costs a lot. Superstorm Sandy cost New Yorkers $50 billion. This year alone, at least 12 over-a-billion-dollars-lost weather and climate disasters have hit the U.S. And, yes, climate change is likely contributing to these kinds of storms, wildfires, and droughts.

Other costs include funding the Federal Emergency Management Agency and building climate-proof infrastructure like seawalls and flood control — all of which takes considerable dough. By 2100, the U.S. could be paying nearly $2 trillion every year because of climate change.

It's not all bad news, though: Renewable energy could also create a ton of new jobs. While the shrinking opportunities in unclean energy are rightly on some people's minds (lookin' at you, Ken Bone), new initiatives could help workers make the transition to renewable jobs.

Climate change could even affect our health care.

Warmer temperatures may mean more mosquitoes and ticks and more habitable places for the little blood-suckers. That might also mean more insect-borne diseases like malaria and Zika. Heat stroke could go up too, as well as air pollution.

So why do we need to talk about climate change? Because it affects our health. It could even make our allergies worse (noooooo).

Let's get real: There’s a reason the entire United Nations met in Paris last year to talk about our changing planet.

195 nations came together at the 21st Conference of the Parties, and the fact that they all actually agreed on something was historic. That puts climate change directly at the center of international diplomacy.

Regardless of who is sworn into office on Jan. 20, climate change will be a huge part of the job for the next four years.

If we can’t even talk about our planet, maybe the current debates aren’t the best way to help us live more informed lives.

We deserved a chance to hear the candidates talk about climate change, to at least hear whether Donald Trump still thinks climate change is a Chinese hoax (except when he doesn't). And we deserved to hear about what Hillary Clinton plans to do to help us adapt as our planet changes.

We can’t be discussing our kids' futures without also discussing what kind of future we’re giving them. That's why the climate change conversation matters.