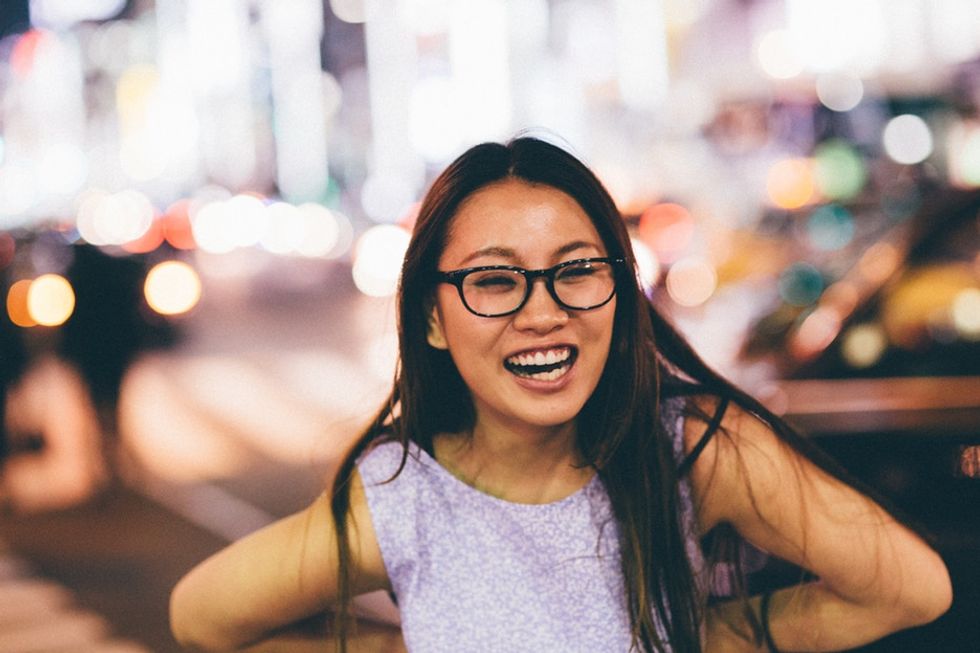 In 2013, I left a job when I had little in my savings account to carry me over.

It was the right move. I knew that. But the timing? Well, that wasn't ideal. I threw myself into the job hunt and tried to make my minimal savings last as long as possible.

One and a half months later, and I hadn’t found another job. Things were looking bleak. And, bam, just like that it was time to pay the rent again. In NYC. And even with roommates and a dingy apartment, that’s no small feat.

I had interviews lined up that looked hopeful, so I decided to buy myself some time. I turned to my credit card.

You see, I'd used my card’s cash advance to cover my rent. One of those interviews panned out and I did get a job — yay! — but as we all know, that first paycheck takes a few weeks to arrive. I used the card again to cover basic necessities.

This debt sent me on what I'll call a five-phase journey. The first phase? Feeling hopeless.

I was overwhelmed, confused, and disappointed in myself.

“There’s a lot of stigma attached to debt and it really eats at self-esteem and confidence," says Charles Freeman, a psychologist based in San Diego. He explains that when someone winds up in debt, "they resent the debt, and then that resentment leads to stress, impaired self-esteem, shame.” He's right.

I’d never really understood debt before. And while I know that many people are wrestling with far more than $2,000 in debt, it felt like the end of the world to me.

My situation wasn’t unique. A lot of people rely on credit cards or don’t have savings, and it can feel pretty hopeless and overwhelming.

I spent a year making payments and barely saw the balance reduced. I paid more than the minimum amount, but it all went toward interest. They don’t teach us this stuff in school. I didn’t know what to do.

Thank goodness for Google. Through research, I found a glimmer of hope.

I did my homework on how credit cards and interest fees work. Basic stuff. I mapped out a plan and started to feel excited. I could see my way through the mess I'd created. Enter phase two: Realizing I wasn't doomed.

I transferred my balance to a 0% interest card. I also took a look at my income versus my monthly expenses. I mapped out my pay schedule and upcoming expenses, determining when I could afford to make additional payments and exactly how much. I passed on nights out with friends and buttoned up my spending so that it was as efficient as possible.

I made sacrifices and remained disciplined, but I began to feel anxious.

I wanted to pay off the debt as quickly as possible, so as I saw success, I was tempted to cut back even further. I found myself sacrificing necessities unnecessarily. I wanted all of the debt gone, and I wanted it gone immediately.

But cutting back on necessities was stressful. The debt was still there, and now my quality of life was decreasing. "Some people create a budget, they're starving themselves, they're isolating, they're trying to shave off too fast, and their quality of life is extremely impaired," Freeman explains.

So, I had to tell myself to stay calm, be patient. Give it time.

I learned to celebrate small milestones — down by 25%! 50%! It was an incredible feeling.

After a year of feeling like I was throwing money into a black hole, suddenly I could see the difference. The lower the balance got, the more determined I was to master money: phase 4.

In just a few months, the debt was gone. A challenge that previously felt insurmountable was suddenly nothing.

Literally, balance 0. I'd done it.

Not everyone can pay off debt this quickly (and many people are faced with paying off much higher balances). I was fortunate enough to be responsible only for myself and to have the financial flexibility to put every extra penny toward my debt. But one thing I learned is that even the smallest amounts do add up, as cliché as that sounds.

I felt elated. And I felt empowered.

I was ready to tackle any financial goal that came my way. I was almost addicted to that feeling of success. Phase 5.

“That’s called a process addiction. … there are payoffs emotionally," explains Freeman. "By paying it off [you] get some sort of external self-esteem.” And he cautions that the true goal is to learn how to not get overwhelmed by debt and to view financial hurdles as long-term goals that you can and will conquer with time.

After that first major failure and subsequent triumph, my financial game is much stronger. And I've found that there’s no substitute for education.

Trying to tackle debt without understanding it was useless. It was like throwing a ball while squinting up at the sun. I had no idea where my efforts would land. And I sure wasn’t hitting my target.

But that feeling once I dug in, found the right resources, and knew what to do? Oh, it was glorious. It was a small win, but it made me feel like any of my financial goals are possible. And in truth, they really are, given hard work, due diligence, patience, and of course, just the tiniest bit of luck. Now, on to my next financial goal!