19 fascinating pictures to remind us what polio used to look like. 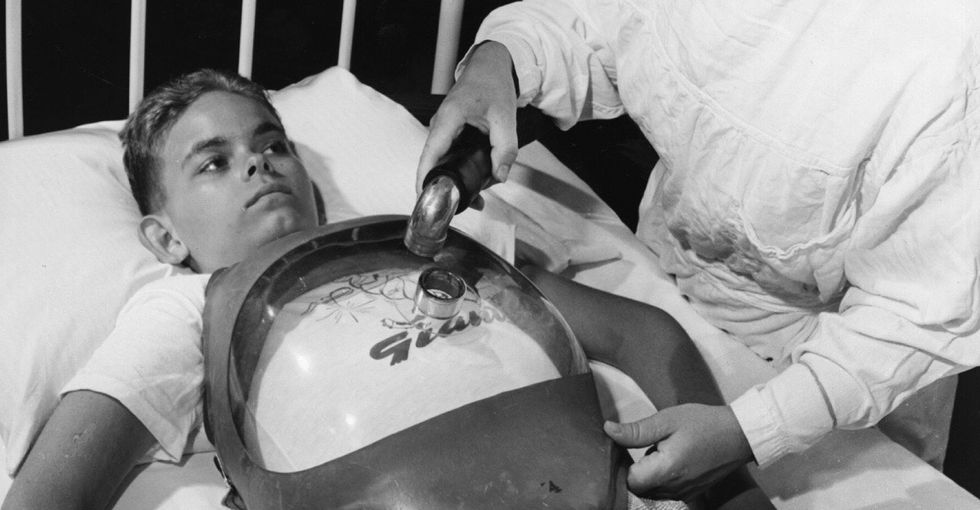 My dad had weird feet.

He was born in 1942, and when he was just a few years old, he caught polio. He survived the disease, but it affected the way his legs and feet grew — one foot was always a shoe size or two smaller than the other one. I remember being fascinated by them when I was little.

Though polio affected my father, I myself have never been in danger of contracting it.

In fact, the disease has disappeared completely from the United States, and we're incredibly close to eliminating it worldwide.

But as much as we should celebrate its passing, we should also remember what it was like when polio affected people everywhere. And though these photos may be somber, they should also give us hope; they prove that we can overcome the worst obstacles and most pernicious infections. After all, we've done it before.

Check out these photos of what polio looked like when my dad was a kid.

Polio was a scourge. It could affect anyone. But it preyed most heavily on children.

A child paralyzed by polio in 1947. Photo by Keystone Features/Getty Images.

A young patient getting fit with a respirator in 1955. Photo by Three Lions/Getty Images.

Polio's actually a lot older than my father was. We even have paintings of it from ancient Egypt.

For most of that time, polio was content to remain quiet.

Polio is a virus passed mostly through contaminated food and water. And as long as we humans were spread out, it never got the momentum to really become a problem. But as cities grew and, ironically, better sanitation came about and removed some of our natural exposure to it, polio suddenly found a weak spot in our defenses.

Children were most at risk of contracting the virus – hence one of its common names: infantile paralysis.

In most cases, it's either harmless or mild, like a case of the flu. But in some people, polio can cause serious, sometimes permanent paralysis.

If the virus ends up in the central nervous system, it interrupts our body's ability to communicate with our muscles, causing paralysis. And if the paralysis lasts for a long time, the muscles themselves can start to waste away, a process known as atrophy.

This is already bad, but there's one more cruel twist to the disease. If a child is the one who gets paralyzed, the muscle atrophy can end up affecting the way their bones grow. That's what happened with my dad and why his feet looked so weird.

If the diaphragm was paralyzed, patients would need respirators to be able to breathe. Some respirators were portable, like this one.

A portable respirator from 1955. Photo by Hans Meyer/BIPs/Getty Images.

For a given value of "portable."

Others, like the iron lung, effectively trapped you inside.

An iron lung in 1938. Photo from London Express/Getty Images.

If you did recover, you may have still needed regular physical therapy to strengthen the atrophied muscles. Aquatic therapy was popular.

At its height, polio was one of the great public specters. People were terrified of it. Public pools were closed in a misguided effort to stop the spread. Houses were quarantined.

A board of health warning circa 1910. Image from National Library of Medicine/Wikimedia Commons.

There were public health campaigns and donation drives to help fuel research, like the March of Dimes.

A cartoon from 1943. Image from U.S. National Archives and Records Administration/Wikimedia Commons.

Still, nobody seemed safe. Even President Franklin Roosevelt had it, although he was careful about hiding his paralysis from the outside world.

A rare photograph of FDR in his wheelchair. Image from Margaret Suckley/Wikimedia Commons.

It was one of the great scourges of its time.

Then, in the early 1950s, Jonas Salk invented the first polio vaccine.

Salk was a researcher and virologist who joined the fight against polio in the late 1940s. Initially tasked with identifying different strains of the virus, Salk and his team saw an opportunity to try to prevent the disease altogether, and their work paid off.

Manufacturers began to mass produce it.

Suddenly, people could save their children from this awful disease.

As people became immunized against it, the disease had a harder and harder time spreading between populations. Numbers of infections started to fall.

And, slowly, polio transformed from a demonic specter into a manageable disease, then, eventually, into a distant memory.

A woman examines a gigantic model of a single polio virus capsule in 1959. Photo from Fox Photos/Getty Images.

Thanks to the vaccines created by Salk and other researchers, most of the world began to forget this disease.

Today, we're on the cusp of eradicating polio altogether. Its last holdouts are in Pakistan, Afghanistan, and Nigeria.

A child afflicted with polio in Afghanistan in 2009. Photo by Paula Bronstein/Getty Images.

We're really close. In fact, one of polio's three strains has already been eliminated.

Photo by A Majeed/AFP/Getty Images.

Which is why the U.N. switched to a two-strain vaccine in May of 2016.

Polio has no natural reservoir. It has no place to hide. Once it's gone, it's gone.

We might never be able to eliminate the flu because it can hide in so many animals, like birds or pigs. But polio only infects humans. So when all humans are immunized, polio will disappear.

We're so close to eliminating a horrible disease thanks to researchers like Salk and workers dedicated to administering vaccinations. There are occasional setbacks, such as a recent shortage of the new vaccine, but researchers hope to completely eliminate the disease by the end of this decade.

We can overcome the worst demons. We have before. And we can do it again.

In the future, the only place where polio will exist is in picture archives like these. And the memories of my dad's poor feet.

From Your Site Articles
GoFundMe Heroes