15 photos of people protesting at the White House and what they accomplished (or didn't).

Sure, a lot has happened inside. But here's a look at what's happened outside. 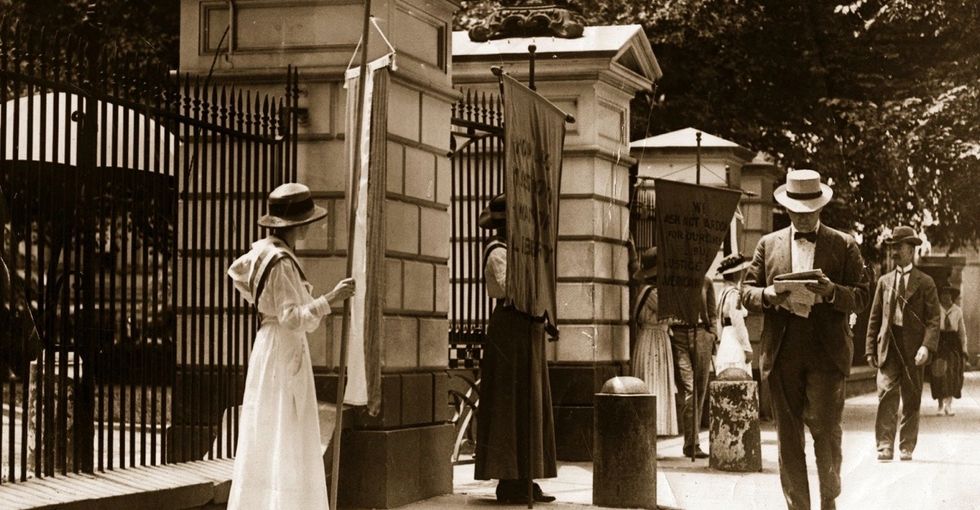 On Oct. 13, 1792, workers laid the cornerstone of what was to become the White House.

Over the next eight years, the two-story house at 1600 Pennsylvania Ave. in Washington, D.C., took shape. On Nov. 1, 1800, President John Adams and his wife, Abigail, moved into what was then known as the Presidential Mansion.

Over the next 223 years, the building underwent major renovations — it was famously nearly destroyed by fire in 1814 — and has been the setting for countless historic moments in American history. But outside the dining halls with their lavish furnishings, conference rooms, and Oval Office lies another setting for democracy: the White House outer gates.

Few places serve as natural gathering points for U.S. citizens who wish to partake in their First Amendment right to peaceably assemble quite like the White House.

And through the years, citizens have used that right to assemble and protest for and against issues like the environment, foreign policy, the military, the economy, and human rights.

Though the 19th Amendment itself wouldn't be passed and ratified for three more years, women were making their voices heard — or, in this case, not heard.

Ashe, along with 94 others, was arrested at the protest. The question was why Haitians seeking asylum in the U.S. were being treated differently than those from other countries. While relations between the countries have improved over time, asylum seekers continue to run into many of the same problems.

3. June 4, 1998: an AIDS protest featuring the open casket of Steve Michael, the founder of ACT UP Washington, D.C.

On May 25, 1998, ACT UP Washington, D.C., founder Steve Michael died as the result of AIDS. On June 4, activists protested outside the White House, calling on President Bill Clinton to make good on his campaign promise of addressing AIDS. Michael's open casket was on display for the world to see. President Clinton was not able to live up to the promise of finding a cure for AIDS.

Photo by Jamal A. Wilson/AFP/Getty Images.

Seven years after the creation of the Kyoto Protocol, the U.S. remained one of the only countries not to agree to its standards for greenhouse gas emissions and other environmental markers. It's been over 10 years since that protest, and the U.S. never agreed to those guidelines.

5. Sept. 8, 2005: Protesters push back on the White House's response to Hurricane Katrina.

The protest, organized by MoveOn PAC, criticized the Bush administration's handling of the rescue and cleanup efforts in the aftermath of Hurricane Katrina. 10 years later, New Orleans is still recovering from the historic storm.

6. Nov. 3, 2006: Children of undocumented immigrants ask President Bush not to deport their parents.

Many of these children were split from their parents when their parents were deported. Though Bush made an effort to pass comprehensive immigration reform, it stalled. Efforts since then have not gone very well either.

Protesters called on Obama to make good on campaign promises to end the wars. In December 2011, President Obama announced that the war in Iraq was officially over. And in Afghanistan, combat operations officially ended in December 2014. However, the regions remain extremely unstable, and U.S. presence remains.

8. Jan. 11, 2010: Protesters mark the eighth anniversary of the opening of the Guantanamo Bay detention camp.

Nearly a year after President Obama ordered Guantanamo Bay closed, it remained very much in use. And it is still open.

9. May 11, 2010: Environmental activists respond to the Deepwater Horizon oil spill.

22 days after the Deepwater Horizon drilling platform exploded in the Gulf of Mexico, protesters stood outside the White House gates, calling on the president to end offshore drilling. On May 27, the Department of the Interior enacted a six-month moratorium on drilling in the area. It has since resumed.

10. Nov. 15, 2010: Protesters chain themselves to the fence to end the military's ban on gay and lesbian service members.

On Sept. 20, 2011, the military's "Don't Ask, Don't Tell" policy barring gay, lesbian, and bisexual people from serving in the military came to an end with the backing of President Obama. However, transgender individuals are still barred from open service.

On Feb. 24, 2015, President Obama vetoed a bill to authorize the construction of the pipeline, citing "consideration of issues that could bear on our national interest — including our security, safety, and environment."

The Senate was unable to override his veto.

President Obama agreed to a one-year extension of the Bush-era tax cuts. At the beginning of 2013, however, many of those cuts expired, resulting in a tax increase for many. Still, it wasn't the "Robin Hood"-type tax Occupy protesters hoped for.

Days later, President Obama announced that he had asked Congress to approve airstrikes against the Assad regime. A year later, the president launched strikes against ISIS.

By its very nature, protest is disruptive. It's our right as Americans to exercise that option.

Protests aren't necessarily clean, convenient, or quiet. All that has changed is the many ways people are able to get their messages out to the world. In decades past, protesters relied on the media alone to make their message heard beyond those in attendance. With the rise of social media over the past half decade or so, it has become easier to connect, share stories, and spread political messages all over the world.

Some will take to the White House gates; others may do their part in the digital realm. What matters is that people still care, and people are still passionate.