13 more reasons to be excited about the Dixie Chicks' return.

They've been a 'Long Time Gone' from the tour circuit, but they're BACK! 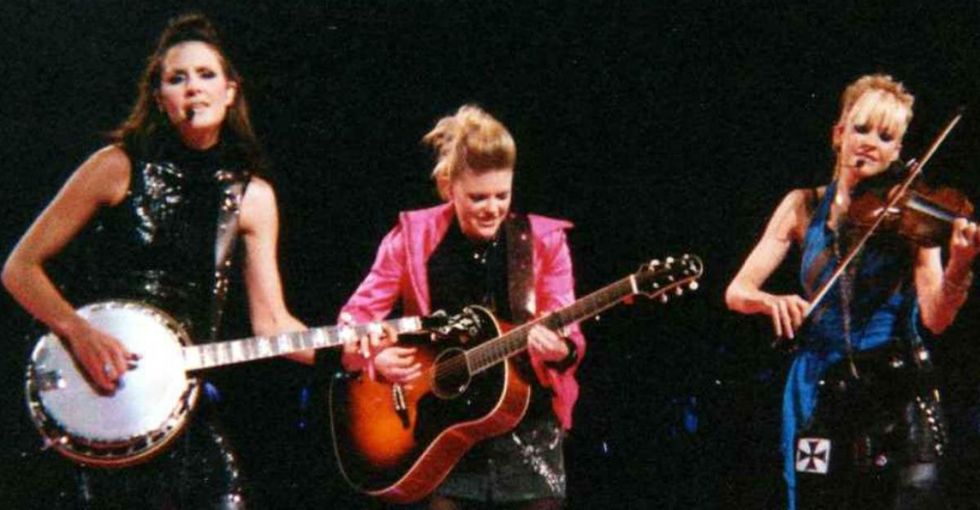 The Dixie Chicks haven't toured in a decade. But now they're back.

We're so lucky, and here are 13 reasons why. Just in case you need 'em.

1. They support our troops, veterans, and those left behind in the form of the gut-punchin' song, "Travelin' Solidier."

Who could forget this song?

You can press play, but grab me a hankie first. Image by DVIDSHB/Flickr.

The song was originally written and performed by country singer Bruce Robinson in the '90s, but the Dixie Chicks were the first to release this musical story of hometowns, veterans, and heartbreak as a single. It reached #1 on what is now Billboard's "Hot Country Songs" chart.

My colleague (and Dixie Chicks superfan) Angie perfectly sums up the power of this song:

"'Travelin' Soldier' pays homage to people who serve our country and also shows their humanity in a heartbreaking way — one that suggests maybe we should be really careful about when and why we send our troops to war."

2. They're frank about fertility.

Not only do these ladies sing about love and loss, they up the girl-honesty ante by singing about in vitro fertilization. " So Hard" was written by band members (and sisters!) Martie Erwin Maguire and Emily Erwin Robison.

The lyrics ding the real-talk bell pretty hard, and it's wonderful, especially considering how much stigma there still is around discussing fertility problems.

Band member Martie Maguire gives zero you-know-whats about speaking out about using IVF to conceive her three children. And she loves science, too. As she told ABC News:

"It feels strange to talk about it now because I have got three children, and when they're climbing all over me it's bizarre to talk about infertility problems. But thank God for science. We have been blessed to live in an era when we have been able to do something about it."

4. They're keeping alive the country tradition of strong female perspectives in their songs.

Sure, they spent a good chunka time writing about each others' relationships ... " Cowboy Take Me Away," anyone? (EVERYONE). That was written about bandmate Emily's then-boyfriend. But they also write about so many more things women face in life ... their music could basically be a documentary.

Songs like " I Hope" grapple with violence — both at home and in war. "I'll Take Care of You" could be an anthem for single parenthood, and "Don't Waste Your Heart" is an epic, and catchy-as-heck, takedown of the idea that humans must always be in a couple. Were the Dixie Chicks the original #SingleLadies?

I don't know, but I do know that I want a Beyonce/Dixie Chicks collab. Like now.

Beyoncé has a cowboy hat. Get her to Nashville!

5. Remember Lilith Fair!? They were in it!

Deep breaths. It's the khaki of the '90s. Image via Jason Philbrook/Wikimedia Commons.

Lilith Fair was a tour of exclusively female artists that was huge in the '90s. It raised around $10 million for charity in its three years of existence. And the Dixie Chicks were a part of it. Just sayin'.

6. They're role models for free speech, and they don't back down.

It's so crazy to think, but back in the early '00s, America apparently didn't love it when our celebrities voiced opinions.

After Dixie Chicks' Maines said, "We do not want this war [in Iraq], this violence, and we're ashamed that the president of the United States is from Texas" at a concert in the U.K., things got weird.

Country radio all but shunned the Dixie Chicks, people got real rude ... and death threats weren't far behind.

But at the first concert in the U.S. after the controversy, fans showed UP.

Maines told the audience, "They told me that you may not come, but I knew you'd come because we have the greatest fans in the whole wide world."

After witnessing that backlash in March, even Madonna (MADONNA) postponed her planned April release of a provocative and political video for her song " American Life."

7. They call out ignorance when they see it.

GIF via "There's Your Trouble/YouTube.

Maines was not into her country-music colleague Toby Keith going after an ENTIRE culture in his song, "Red, White, and Blue (The Angry American)."

" I hate it. It's ignorant, and it makes country music sound ignorant. It targets an entire culture — and not just the bad people who did bad things."

This whole clash of civilizations vibe is still alive and well in the world's response to terrorism, and it's very unkind. I'm proud that Maines had the guts to speak out against it so long ago.

8. Merle Haggard, country outlaw legend, stood up for the Chicks' right to speak their minds.

When people were doing real classy stuff, like making bull's-eyes out of the Dixie Chicks' faces and being proud enough to pose for photos...

...Merle Haggard, country jailbird, generally cool rascal (and author of such lyrics as "If you're runnin' down my country, man / You're walkin' on the fightin' side of me") jumped to the Chicks' defense. He said, in his awesomely nonchalant and straightforward way:

"I don't even know the Dixie Chicks, but I find it an insult for all the men and women who fought and died in past wars when almost the majority of America jumped down their throats for voicing an opinion."

The Dixie Chicks performed a song about domestic violence. It was intense. The characters in the song killed a dude!* That song was called, "Goodbye Earl" and it was great.

*No one's condoning murder here, but come on ... it's a great song. GIFs from Austin City Limits performance via Kohl Harrington/YouTube.

Which was also great.

10. They want you to be able to have your opinion, too. Through voting!

The group performed for Rock the Vote and donated $10,000 to the organization, which helps get young people participating in civic life and voting!

Maines spoke about how her experience being criticized for speaking her mind inspired the band to put their support behind Rock the Vote.

She told Rolling Stone, "I believe everything that's happened in the last few months happened for a reason... A lot of positive things have come from it, and this is just one of them."

11. They created a beautiful and heartbreaking song, "Silent House," about having a family member with Alzheimer's.

" This is a sad song that tries to be sweet. ... It's about my grandmother, my Nonna who has Alzheimer's ... she touched a lot of people, and we all remember. So this song is about that: it's okay to forget, I'll try and carry on."

12. The Dixie Chicks mix the traditional with the contemporary in every way — all while being so true to themselves AND being incredible musicians.

From mixing bluegrass roots with rock 'n' roll, to speaking their minds and fighting the idea that country music artists can only have one opinion ... these women have always been true to themselves.

They're not just an example of what's possible when women own their own destinies; they're an example of the hunger we all have for art that speaks truth.

And that art? It's dang catchy, too!

Now that they're touring again, we can all feast!

And let us all just celebrate their Friends-on-NBC era fashion. The spikiness, the chunky lowlights, the glory! Photo by Vince Bucci/Stringer/Getty Images.

See y'all at the concert.

By the way, here are the 2016 Dixie Chicks North American tour dates.