11 emotional, hilarious, and moving photos from the Museum of Broken Relationships.

A new museum in L.A. is helping people process their broken relationships by treating objects with sentimental value like art. 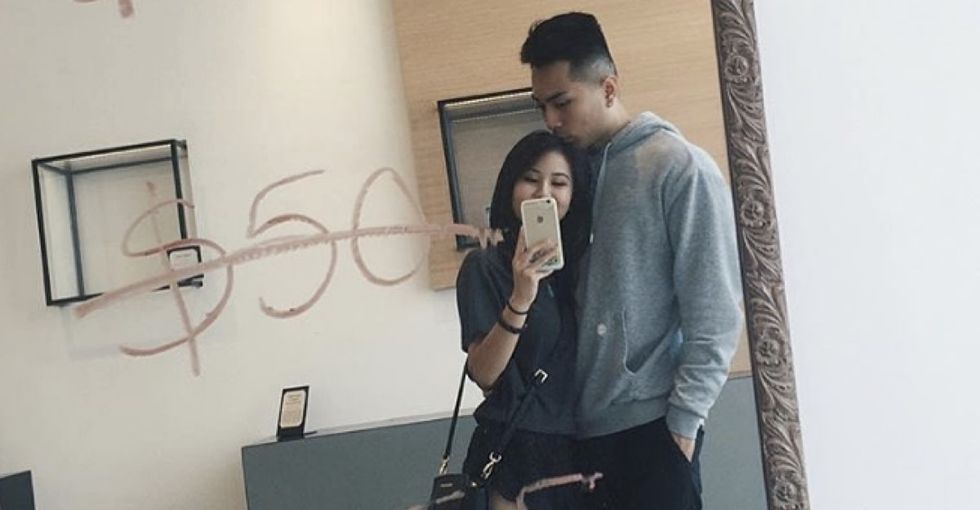 After she broke up with her boyfriend, this woman says she immediately removed her breast implants.

Her boyfriend had convinced her to get them, and she didn't like them much anyway. But she kept those implants in a drawer as a memory, anyway, thinking that someday she'd figure out what to do with them. When she heard about The Museum of Broken Relationships, she knew she'd found the perfect place.

This heart-wrenching confession from an anonymous donor is one of hundreds of objects and stories sent to the Museum of Broken Relationships every month.

The Museum of Broken Relationships opened in June 2016.

It's located on Hollywood Boulevard and Highland Avenue in Los Angeles, and it's a museum where all material remnants of relationships past can go to tell a story.

The concept of this unique museum comes from Croatia. Founder and president John B. Quinn was on a family vacation in April 2015 when he visited the original Museum of Broken Relationships there, and he thought it would be a great fit for the City of Angels.

According to director Alexis Hyde, the relationships represented in the museum could be with yourself, with your best friend, between a father and daughter, or they could even be about broken relationships with the church.

The museum is laid out in a loop: The first objects are icebreakers so people can get acquainted with the museum's theme.

"There’s a cheerleading costume, a wedding dress stuffed in a jar, a box of love letters, so you really start to get a flavor of what you’re about to be getting into," Hyde said.

"After seven years together, five of them married, my husband told me that he felt stuck and that he 'probably' didn't love me anymore." Wedding dress in a jar. Image via Museum of Broken Relationships Los Angeles/Instagram.

As you go deeper into the museum, the actual physical space becomes smaller.

The ceilings start to get lower, and it becomes a bit more private as heavier subject matters start to show up. That's where you see items dealing with major loss or remnants of long-term relationships gone wrong.

Then, as you loop back around toward the exit, the objects once again become lighthearted.

Hyde said she often watches visitors discuss their relationships with amusement, maturity, respect, and fondness as they walk through the museum.

Hyde said the way people respond to the museum is pretty close to how they respond to broken relationships.

"Everyone responds differently, so we really do get like a whole rainbow of reactions, that's really beautiful," she said.

While some people openly cry right away, others sort of brush off the fact that they're a little uncomfortable by acting silly. And, of course, there are the couples who start making out not long after coming into the exhibit.

As for the most interesting donations they've received, Hyde said they're all pretty wild.

The museum has received over 300 donations so far from all over the country. But Hyde's favorite story is the one behind the breast implants, mentioned earlier.

She said the woman first approached the museum about donating the implants that her ex-boyfriend had convinced her to get. She had to have two reconstructive surgeries to get them right before they broke up and she took the implants out. So they already carried a lot of baggage (literally). He also made her pay him back for them.

The woman wanted to get rid of the implants to remind herself, and others, that no one should dictate her worth or how she should feel about the way she looks. After a long talk with the woman, Hyde said she received a biohazard bag in the mail with the implants inside.

As for why people donate items that have such emotional significance to them personally?

Hyde thinks there are several reasons: There's good old fashioned closure, of course. And it's also a type of catharsis, of letting go of repressed feelings that may still be hurting you.

People come to the museum for similar reasons. They want to feel connected, and they want to find stories that are similar to their own to remind them that they're not alone.

"It's nice for people to honor their relationship or to have a place to put something that isn't the trash or eBay," Hyde said. "It's a way of saying, 'This may be over, but it mattered.'"

This wacky museum reminds us that not every broken relationship is bad.

It's almost impossible to go through life unscathed, without a single broken relationship. But while they were tough, broken relationships are also proof that we were alive and a part of something, and that's why this museum exists.

It must be terribly unnerving to wake up one day and realize the government thinks you're dead, even though you're alive and kicking. You'd figure that if you were declared dead and weren't, you'd have some say in the matter.

However, for a woman in France, things haven't been that easy.

Jeanne Pouchain, 58, who lives in the village of St. Joseph, near Lyon, had a rude awakening three years ago when she received a letter from the Lyon court of appeals declaring that her family members need to pay the money she allegedly owed.

Because, according to state records, she was deceased.