When explicit images of this actor's penis leaked online, 'it' wrote a powerful letter. 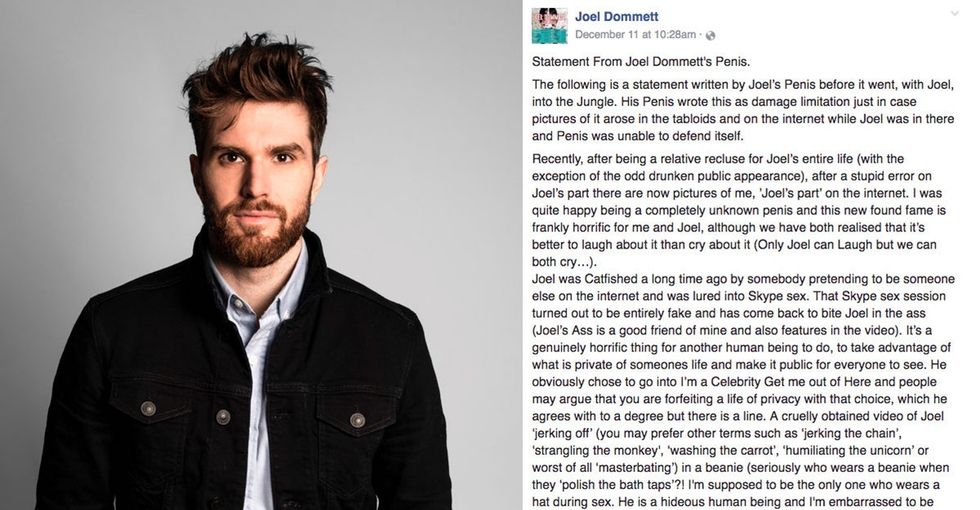 According to Joel Dommett, he's a celebrity of "below average levels of fame." But a recent incident threatened to give him the kind of exposure nobody wants or deserves.

The comedian and actor wrote that he recently met someone online for "Skype sex," but that person turned out to be a scammer in disguise. Soon, photos and videos of Dommett from the Skype session were popping up all over the internet, to his horror.

What happened to Dommett has become a frighteningly common method for criminals to extort money from innocent people, usually men.

They record the whole thing, and as soon as it's over, demand huge amounts of money under threat of distributing the video to friends, family, or in Dommett's case, to the media.

Dommett figured the news, and video, was bound to get out. So he did what he felt he needed to do to get ahead of the story: He wrote an open-letter from his penis.

"...There are now pictures of me, ’Joel’s part’ on the internet," the tongue-in-cheek statement began. "I was quite happy being a completely unknown penis and this new found fame is frankly horrific for me and Joel, although we have both realised that it’s better to laugh about it than cry about it."

He (it?) goes on to warn people about the serious nature of the scam.

"It's a horrific thing for another human being to do, to take advantage of what is private of someones life and make it public for everyone to see."

Statement From Joel Dommett's Penis. The following is a statement written by Joel’s Penis before it went, with Joel,...

This may seem like a joke, but Dommett, and his penis, are right: This new breed of cybersex crime deserves to be taken incredibly seriously.

It's great to see Dommett sticking with his cheerful brand of self-deprecating humor to bring awareness to this issue, but for a lot of men in similar predicaments, the shame is too much to bear.

Many are too mortified to ask for help and end up paying exorbitant amounts of money to keep the scammers quiet. Others fare even worse. In 2013, a Scottish teenager reportedly committed suicide after criminals threatened to send explicit video of him to his family members.

Dommett wants people to know that there's no shame in asking for help if you find yourself being extorted by internet criminals. He even links to an organization that offers a friendly ear, sound advice, and total anonymity to anyone who needs it.

He may have chosen a, uh, unique way of getting his message out, but to the countless men suffering silently through a potentially life-ruining extortion, Dommett giving his penis a "voice" may have been the bravest thing he could do.