What Kind Of Magic Happens When A River Returns To The Sea?

It's hard-working, much-beloved, and much-abused. It hasn't even reached the sea for half a century. Until this year. 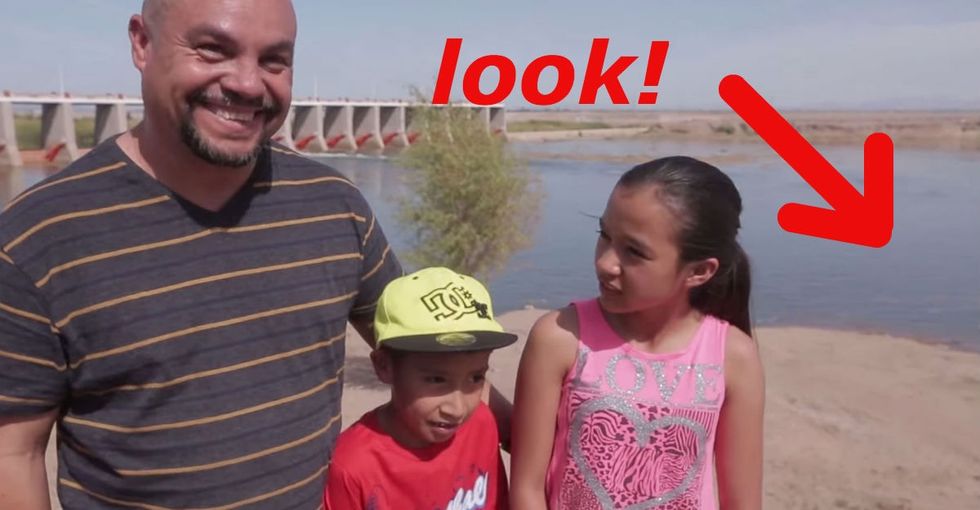 100 years ago, the Colorado River reached the sea at a 3,000-square-mile lush, green delta in the desert, home to hundreds of thousands of birds, animals, fish, and people too. After a visit to the delta in 1922, Aldo Leopold wrote, "... the river was nowhere and everywhere," for he "could not decide which of a hundred green lagoons offered the most pleasant and least speedy path to the Gulf."

But for the last 50 years, that delta has been a salty wasteland, almost devoid of life.

People in the U.S. and Mexico are cooperating on Minute 319, an agreement that is working to restore a regular "base flow." In spring 2014, they created a one-time pulse of water to mimic springtime floods. In this giant moment in water history, you can see the blue arms of the river flowing down across the parched delta to meet the dendritic tidal channels of the sea for the first time in years.

For most young people in towns along the usually dry riverbed, the flow was a thing of wonder.

These kids live in the small community of San Luis Rio, Colorado, a town named for a river most of them have never seen.

People working on river restoration say that sending even just 1% of the river's annual flow downstream can mean restoring 2,300 acres of forest and marsh alonga 70-mile stretch of river.

A flowing river is good for tourism, recreational hunting, sport and commercial fisheries, not to mention families ...

Scientists are watching reptiles, fish, birds, plants, and other wildlife to see how they respond to the water in the desert.

Over eight weeks, about 34 billion gallons of water flowed from Morelos Dam downstream toward the sea. People had worked for months to clear invasive trees (especially tamarisks) and to plant seedlings of cottonwoods and desert willows, hoping they'd take root in the spring flood.

As you've probably heard, the Colorado region is baking in the worst drought in decades, making it even more amazing that people of two nations agreed to set aside billions of gallons of water to bring a river back to life.

May it happen again next year.

Watch the original video "Renewal," narrated by Robert Redford, about the river's return in the spring of 2014.

And definitely don't miss Will Ferrell's take on the situation. You can read Philip L. Fradkin's "A River No More" for the backstory.