What do these 6 stars have in common? They fund sea vigilantes who take down evil sea criminals.

Next up in badass things old school celebs are doing that you didn't even know about ... 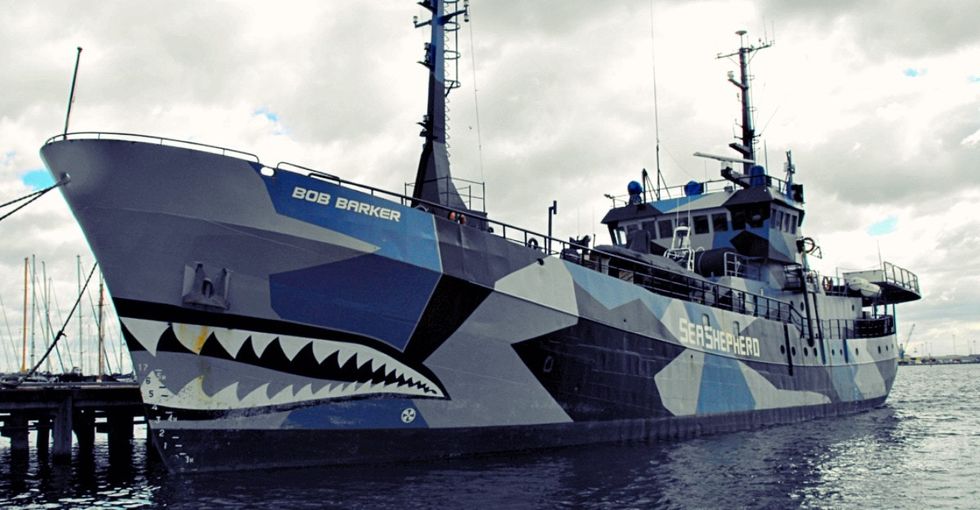 He famously ended every show with a reminder to spay and neuter your pets because he loves animals. GIF via "The Price Is Right."

...and partial bankroller to a group of vigilantes that have been chasing down evil criminals on the high seas.

Law enforcement on the high seas is lax. And there's a LOT of money to be made from taking advantage of that. It's not uncommon for fishing ships to go rogue, fish illegally, and seriously abuse both the environment and human rights with little regard.

So the current reality is this: Bob Barker and other celebrities are putting their money into a group called Sea Shepherd Global — because if governments won't protect the seas, Sea Shepherd sure will.

"[Sea Shepherd] describes itself as an eco-vigilante group, flies a variation of the Jolly Roger on its ships and often cites the motto, 'It takes a pirate to catch a pirate.' ... Sea Shepherd's goal was not just to protect a rapidly disappearing species of fish, its leaders said, but to show that flagrant violators of the law could be brought to justice." — Ian Urbina from The New York Times on Sea Shepherd

And boats bought by Bob Barker!

Note: This is the actual boat named "Bob Barker." I know. Shark! It looks so badass! Image by AussieLegend/Wikimedia Commons.

Recently, Sea Shepherd Global sailed Bob Barker's boat (appropriately named the Bob Barker) and trailed a boat called the Thunder, which was notorious for illegally fishing for Chilean sea bass — to the tune of $76 million in illegal sales in the past decade. The Bob Barker trailed the Thunder for over 100 days in the Arctic, and the chase ended when the Thunder sank.

"There is no way to stop it sinking." Stopped, The Thunder took its illegal evidence 2 miles down to the sea floor. The 4th Installment of The Outlaw Ocean: http://urbina.io/1KuY8Zz
A photo posted by Ian Urbina (@ian_urbina) on Jul 28, 2015 at 4:13am PDT

It was dramatic. But that's how Sea Shepherd rolls.

So are we talking about a vigilante navy funded in part by famous people? Yes, we are.

And Bob's not the only patron. I looked into other famous folks involved in Sea Shepherd and found more than a few names I recognized! Sea Shepherd's board of advisors includes even more — Sean Penn, Linda Blair, Pierce Brosnan, and others!

Here are my favorite five:

He bought a boat! And Sea Shepherd, the organization he bought it for, named it after him.

2. Sam Simon, co-creator of "The Simpsons"

Sam Simon was a famously big-hearted philanthropist. He largely funded the $2 million purchase of Sam Simon the boat, and the rest is Sea Shepherd history.

While the Bob Barker was hot on the tail of the Thunder, the Sam Simon was helping out with fuel, supplies, and other things on the high, icy seas of Chilean sea bass territory.

He's got a boat, too! It's mainly involved in dealing with the issue of plastic debris in the oceans. Where the government fails, President Bartlett steps in!

That is, Richard Dean Anderson, most famously known (to me) for playing MacGyver.

His pet cause is baby seals. He's worked with Sea Shepherd a lot to raise awareness around seal hunting.

She's got a Sea Shepherd boat too! It's an anti-whaling boat.

Bardot went on a whaling trip with the founder of Sea Shepherd in 1977, and she's been involved ever since.

He's on the International Advisory Board of the Sea Shepherd Conservation Society.

Welcome to 2015, where part of the ocean is kinda ruled by celebrities.

The chase of the Thunder wasn't the end. Until governments step up, Sea Shepherd Global will continue its vigilante justice on the Wild West-iest parts of the Earth's ocean.

Another pirate ship on Interpol's Most Wanted list was recently chased down by Sea Shepherd, which then got police to detain the ship in port in Thailand. Then one night, when the police weren't paying attention, the ship snuck away, back onto the high seas. *facepalm*

And until actual governments step up, the price is right ... on celebrity funded vigilante ocean justice.