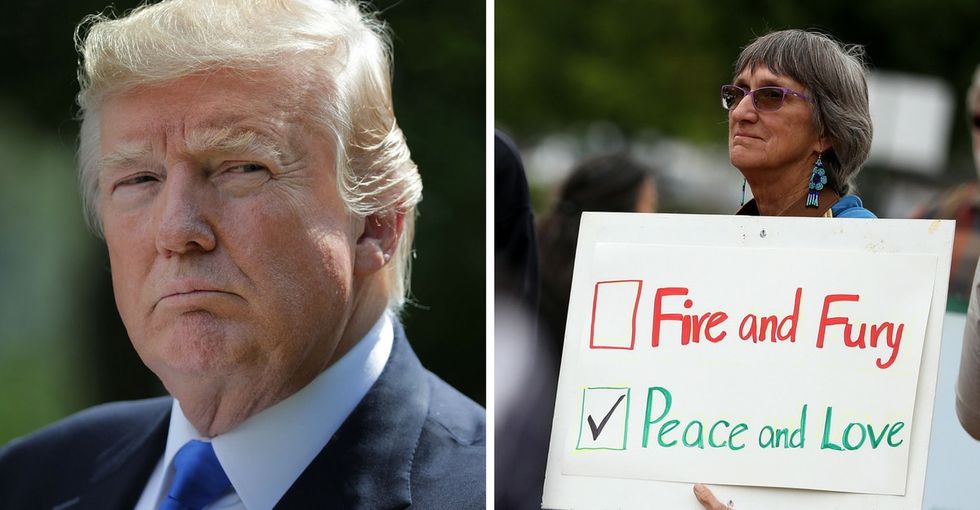 The facility is used for nuclear weapons research.

The very same August day 72 years ago, the U.S. dropped an atomic bomb on Nagasaki, Japan.

The blast came just three days after the U.S. dropped the bomb on Hiroshima.

Once a bustling city, Nagasaki was transformed into rubble and ash. Photo by Hulton Archive/Getty Images.

The victims of the two attacks, which prompted the bloody and devastating end of World War II, still live in the memories of the protesters in Livermore.

“We are here to stand with the survivors of that nuclear attack, but we are also here to stop the next nuclear war before it starts,” demonstrator Marylia Kelley told SF Gate.

Demonstrators stage a "die-in" to remind the public of the lives lost in nuclear warfare. Photo by Justin Sullivan/Getty Images.

More than seven decades have passed since the first use of nuclear warfare forever changed our world.

The protesters' message is simple: The horrific consequences of those weapons should never be forgotten.

The blast in Nagasaki, seen from about six miles away. Photo by Hiromichi Matsuda/Handout from Nagasaki Atomic Bomb Museum/Getty Images.

Estimates vary, but it's generally believed that at least 150,000 people in Hiroshima and 75,000 people in Nagasaki were killed in the blasts.

Those figures don't count the thousands more who died of illnesses related to radiation exposure in the months and years that followed.

A Japanese victim of the atomic explosion in Nagasaki. Photo courtesy of National Archives/Newsmakers.

Beyond the cost of human life, the physical destruction of both cities was unprecedented.

About 92% of Hiroshima's structures were either destroyed or damaged in the blast, according to the Campaign for Nuclear Disarmament.

The aftermath of the atomic attack on Nagasaki. Photo by AFP/Getty Images.

The black-and-white photos may be relics, but their stories — and the lessons we should learn from them — are just as relevant as ever.

The 72-year mark of the attack on Nagasaki comes amid rising tensions between the U.S. and North Korea.

North Korea's growing nuclear weapons program has sparked renewed fears among its neighbors and leaders in Washington that the country poses a threat to its East Asian adversaries — and potentially the U.S.

On Aug. 11, President Trump needlessly escalated tensions when he tweeted that the U.S. military is "locked and loaded" for battle against North Korea.

The tweet came days after he warned North Korea's leader, Kim Jong-un, that if the country continues making further threats against the U.S., "they will be met with fire and fury like the world has never seen."

Trump's provocative language did nothing to calm tensions, of course. Kim quickly answered the president's threat with a threat of his own: a missile attack on the U.S. territory of Guam.

The contentious situation gave protesters at the Livermore lab a renewed sense of urgency to speak out boldly against the use of nuclear weapons.

“Trump’s statements are pushing us closer to the brink of a nuclear war,” said demonstrator Scott Yundt. The protest at Livermore is an annual event that Yundt has been attending for 12 years. But this year, he told SF Gate, feels different.

“There’s a palpable and particular fear we are all feeling today," Yundt noted. "Conflict with North Korea and the United States is possible."

"I worry our president will press the nuclear button without the consent of the American people," Yundt said.

That's a big reason why demonstrators took to the streets this week.

According to police, 48 demonstrators were arrested for trespassing during the peaceful protest, Patch reported. They were issued citations and released.

The anxieties exhibited by demonstrators are ones shared by many Americans as a bombastic, short-tempered president leads an administration with no unified strategy on smoothing an incredibly complex situation with North Korea.

"Just thinking about it despairs me," said demonstrator Barbara Milazzo.

Photo courtesy of the National Archives/Newsmakers.

Still, Americans shouldn't feel as though war is imminent.

The situation is a serious one, experts have near-unanimously concluded. But judging by a multitude of factors — including the messaging coming out of North Korea and the country's current capabilities — we're not on the brink of war (yet).

It still helps, however, to remember those lost 72 years ago and let their memories inspire us to speak up for peace as loudly as we can.

“This is the most we can do,” Milazzo noted. “We are using our voices to protest."