Watch a man's reactions to the modern world after spending the last half-century in prison. 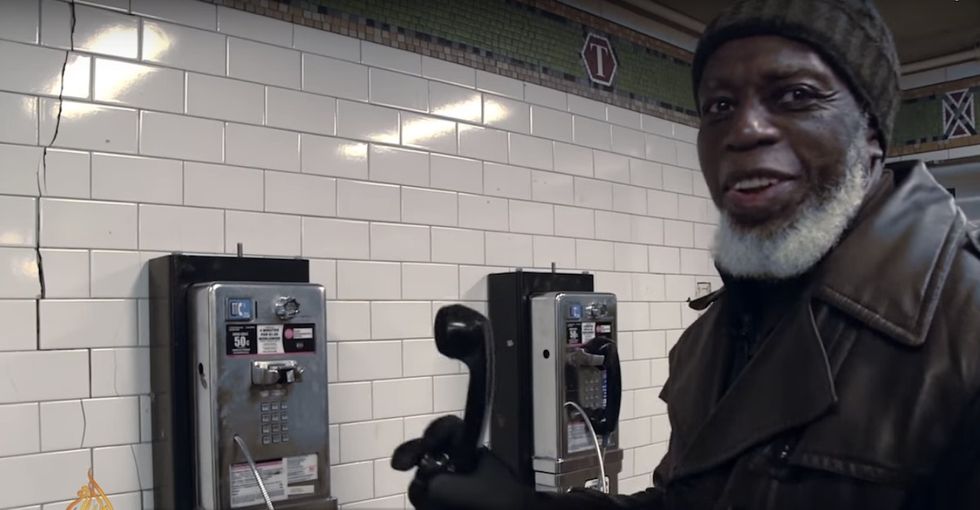 Otis Johnson was released from prison in 2014 after serving a 44-year sentence.

He was locked up at age 25 for the attempted murder of a police officer. As you can imagine, walking free at 69 was like stepping out of a time capsule.

All images via Al-Jazeera English/YouTube.

And what wackier place is there to rejoin society — after almost half a century of relative isolation — than New York City?

The world he knew before prison is just a memory.

In an interview with Al-Jazeera, he reflected on how much things have changed.

During a visit to Times Square, Johnson recalled streetscapes commanded by towering buildings and animated by the bustle of people.

Today, however, his city gaze is drawn by something ... different.

"I ain't never seen nothing like this before," he said as he nodded toward the digital ads illuminating Times Square with the gospel of consumerism. "Look. On the windows? We ain't seen nothing on no windows but people. Walking by. Not no video."

Johnson noticed something peculiar about people, too.

"I seen that ... the majority of the people was talking to themselves," he said, noting how many people had electronic devices in their ears. "What, everybody became CIA or agents and stuff like that?"

It may seem odd that Johnson isn't at least vaguely familiar with these advancements in consumer technology. But bear in mind that he lost contact with his family in 1998 and didn't have anyone else on the outside to keep him up to speed.

And speaking of phones, he learned an important lesson about modern telecoms the day he walked out of the clink: No one uses pay phones anymore.

Johnson was also overwhelmed by what he saw at grocery stores — the explosion of food options and the colorful and bizarre concoctions that didn't exist 44 years ago.

"I eat different things now. Because I'm looking at all this crazy stuff they got. ... The peanut butter. It had jelly in it. And I never seen nothing like that before."

Actually, a lot of us still find it odd.

Johnson is happy to be free, but there's a lot we can learn from his release from the prison system.

He left prison with the oh-so-generous parting gifts of $40, an ID, two bus tickets, and some paperwork. (Wow, New York. You shouldn't have.)

And without a family to come home to, Johnson gets by with help from The Fortune Society, a nonprofit that helps ex-cons find their way in life after incarceration.

According to Al-Jazeera, folks like Johnson who are released after serving at least 20 years represented less than a percent of all state prisoners in 2013. Because of the rarity of their cases, they're more likely to fall through cracks in the system.

But Johnson is determined to make the most of his freedom:

"Holding on to anger will only stagnate your growth and development. ... Everything happens for a reason, I believe. So I let that go and deal with the future instead of dealing with the past. ... And that's how I survive in society."