A Twitter user asked people to share the most random facts they know. The answers didn't disappoint. 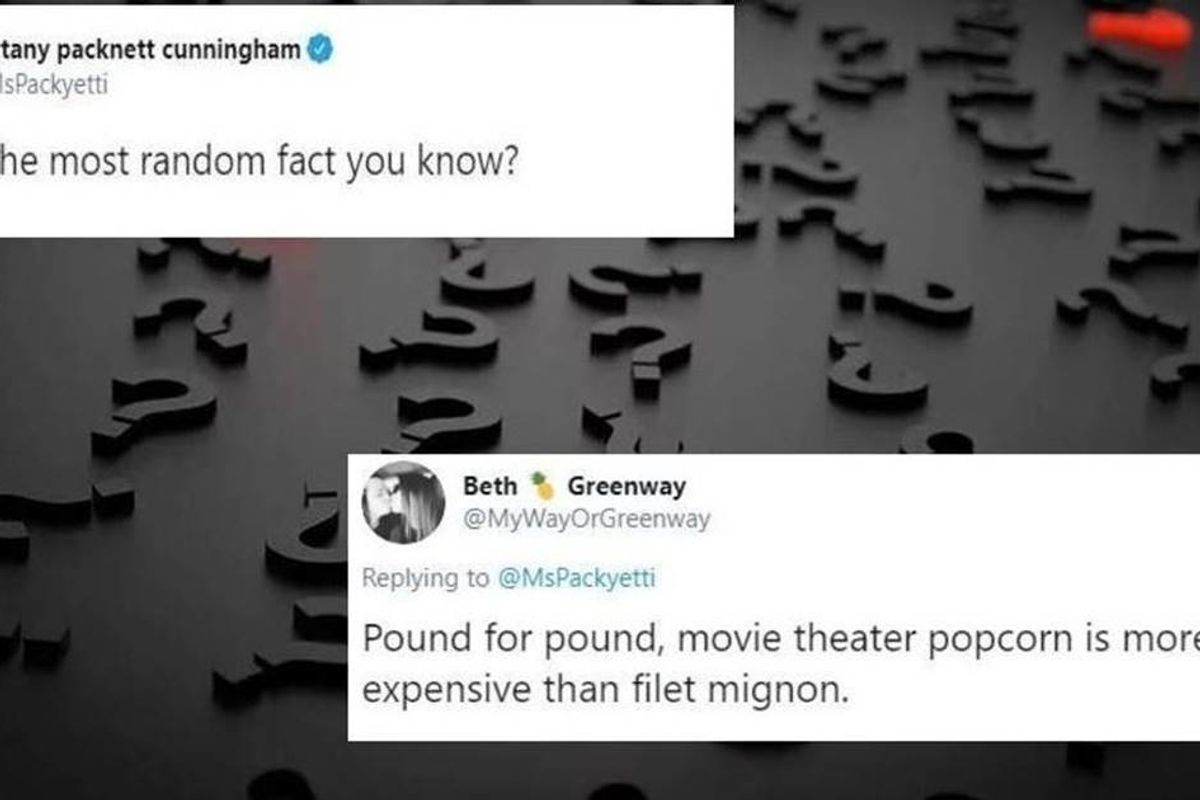 Certain people have an innate ability to remember random facts. They are great at trivia but can also be insufferable know-it-alls.

So why are some people better at recalling random facts than others? Researchers in Europe believe that it's because their brains are more efficiently wired than other people's.

"We assume that more efficient networking of the brain contributes to better integration of pieces of information and thus leads to better results in a general knowledge test," biopsychologist Erhan Genc, from Ruhr University Bochum, said according to Science Alert.

Brittany Packnett Cunningham, an MSNBC contributor, activist, and co-host of Crooked Media's "Pod Save The People," wanted to harvest the mind hive on Twitter and find the most random fact that anyone knows.

"I mean RANDOM random," she wrote.

The answers ranged from the utterly pointless to the truly amazing. There was also a generous helping of utterly disgusting answers thrown in the mix.

Almost every answer deserved the follow-up question: "Why in the world do you know that?"

What's the most random fact you know?

Most were utterly useless, but somehow still fascinating.

Snails can sleep for up to three years when the weather doesn't suit them.
— 𝒟𝒶𝓃𝒾𝑒𝓁𝓁𝑒 (@sparkleyflowers) January 28, 2020

most mammals have twice as many nipples as their species' average litter size (e.g. humans mostly have 1 kid at a time, but 2 nipples), this is colloquially referred to as the 'half nipple rule'

except opossums, which for some reason have an odd number of nipples
— Anarcho-Bobcat (@AnarchoBob) January 28, 2020

The only word in the English language with all vowels+Y in alpha order is “facetiously" 😬
— christy mcguire spellithoweveryouwant (@mnemognose) January 28, 2020

Queen Elizabeth is one of the only people in the world who doesn't need a passport to travel.
Everyone else in the royal family does.
— Connie B (@heyconnieb) January 28, 2020

Some were pretty darn cool.

London Tube platforms have different tilings because when the Tube was originally built, a lot of people who used it were illiterate, and the different tilings helped them know what station they were at. pic.twitter.com/Yw8e04zCJA
— Sahil (@thesahilshah) January 28, 2020

When you look at a flower, some of the photons that entered your eye just ended a 100,000-year journey from the center of the sun.

Nobody else sees them.

Elephants are the only animals other than humans who have something like funerals. They cover the dead elephant gently with leaves and branches, then stand around in a circle for hours making sad noises.
— 🌹Saffi ✡️ (@SaffiEriksdottr) January 28, 2020

There was a day when your parents put you down and never picked you up again.
— Bradley King (@BradleyKing1980) January 28, 2020

Humans have a coccyx (aka a tailbone) which is the remnant of, you guessed it, a vestigial tail. One of our several vestigial features.
— Cat Noone (@imcatnoone) January 28, 2020

The act of touching glasses to cheers comes from medieval suspicions of poisoning each other, so youd slam mugs together to spill each others drinks into your own to show trust you werent trying to kill them. Europeans man...
— james beard (@beardjam) January 28, 2020

Male dolphins can ejaculate as far as 10' and with such force it can kill a human if that human was foolish enough to attempt zoophilic relations with dolphin.
— dr. kittens not kids (@kittensnotkids) January 28, 2020

After Lyle and Erik Menendez murdered their parents, they went on a spending spree with the insurance and inheritance money. This included a trip to NYC and floor seats at a Knicks game. Look closely at Mark Jackson's rookie card, who do you see? pic.twitter.com/XxbodoUXsS
— Meghan S (@bluekrsna) January 28, 2020

And some could be helpful down the road. You just never know.

If you are attacked by a gator and your arm is in its jaws, push, don't pull. If you can push the flap open at the back of its throat, water rushes in and it starts to drown and will open jaws, hopefully releasing you.
— Anika Noni Rose (@AnikaNoniRose) January 28, 2020

The Phenomena: "The Doorway Effect"
When you forget the reason you enter a different room.
To retrieve the reason, walk backwards w/o turning around.
It can trigger the memory.
— CK (@la_natif) January 28, 2020