This free camp is helping military kids who've paid the highest price learn to be kids. 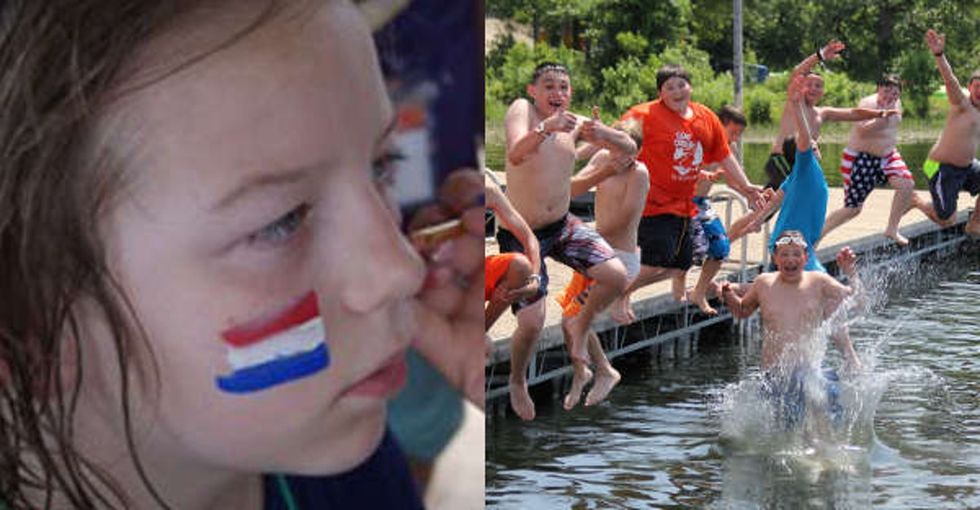 For years, 9-year-old Miriam Gaston watched her dad Shafer leave home for months at a time to serve as an officer on a submarine.

Last July, she left home for the first time herself. She was going to summer camp.

"It was sort of scary because it was my first sleepaway thing for over 24 hours, and so I was sort of freaking out," she explains.

Miriam Gaston gets her face painted at camp. Photo via Tara Gaston.

For Miriam's mom Tara, the experience of sending her child away to summer camp was both totally completely new — and distressingly familiar.

Just like when her spouse was away, Tara wouldn't see her daughter when she woke up in the morning and when she went to sleep. She wouldn't know if Miriam was sad, got in trouble, or missed home.

For eight days, her 9-year-old would be on her own.

"I had to walk away slowly," Tara recalls, of dropping Miriam off. "And I went to my car and sat there for a second. But then I drove away."

As she headed off to the dining area to make a name tag, Miriam became one of over 3,000 military kids each year who experience a week summer camp provided free of charge for children of injured, ill, or fallen service members or veterans.

It's a group that includes Miriam's dad — who was medically discharged from the Navy after a multiple sclerosis diagnosis in 2015 — and the parents of over 90% of her fellow campers.

The Camp Corral program, established in 2010 by Golden Corral restaurants founder James Maynard and his daughter Easter, takes place at 22 partner camps across the country.

The restaurant chain provides partial funding for the camps. Organizations, including Disabled American Veterans, and individual donors provide the rest.

Some camps have zip lines and ropes courses. Others have rock walls or lakes for boating.

For many campers, the particular activities are less important than the bonds they form with their fellow campers who share many of their same life experiences.

While thousands of organizations support military and veterans in the United States, few exclusively serve their children.

Longino, along with her small staff and a few dozen volunteers, works to provide a safe, healing, fun environment for the thousands of kids who were "drafted" into service, especially as America's overseas conflicts continue to evolve deep into their second decade.

"We are 16 years post-9/11, and this is our population. These are children we’ve got to take care of," Longino says.

The camp gives campers, especially those who have taken on the role of caregiver to a younger sibling while an able-bodied parent takes care of a disabled one, a place to "just to be kids," Longino explains. For Miriam, that meant writing a theme song for her cabin, kayaking, decorating her bunk, and covering her counselors with oobleck.

But it was a dance that was the highlight of Miriam's week.

"Everybody was clapping and jumping, and I’m pretty sure across the lake or river or whatever, the people in the city could hear us," she says.

For military parents, particularly those who have dealt with trauma, sending a child to sleepaway camp can trigger a host of fears, which the camp works to address.

That means training staff, from directors to counselors, on handling issues that can crop up among the children of wounded, ill, or fallen service members and veterans — including separation anxiety and more severe homesickness.

It also means building in time for older siblings — who frequently take on a quasi-parental role at home — to spend time and counsel their younger brothers and sisters.

"Every time I saw him, I tried to hug him, but he’d shove me off to go hang out with his friends. Typical older brother stuff," Miriam says.

Camp Corral is also designed to give parents, who have spent many months apart over the course of their relationship, valuable time to reconnect.

"With submarines, it’s not so much the distance, it’s that there’s a lot of time that you can’t talk to them," Tara says.

Tara and Shafer spent Miriam's week at camp helping their in-laws clean out their apartment and preparing to move north to Saratoga Springs. For a family in transition, the camp's lack of a price tag gave them much-needed flexibility to plan the rest of their lives together.

"At that time, we weren’t sure what our income would be, where we would be living, what’s going on. It was very helpful to be able to give them that and not have to worry," she says.

Like most kids, Miriam's last day of camp was the exact opposite of the first.

"She and her friends were hanging out, and she was like, ‘Do we have to go now?'" Tara says.

It was a decision Miriam didn't want to make.

"I was sort of torn. Because if I didn’t leave, I would probably be abandoned by everybody, and there would be storms and I would probably starve," Miriam laments. "But if I did leave, I probably wouldn’t see anybody at the camp again."

As with any camp, Camp Corral is more about about friendships than archery — and more about transforming shy campers, who have already shouldered heavier burdens than most of their peers, into independent young adults.

"A great camp can run a camp in a parking lot," Longino says.

Camp Corral is much more elaborate than a parking lot. And it's free. But it doesn't come at no cost for families like the Gastons, who, for years, sacrificed their stability, health, and childhoods in service to their country.

They've already paid for it.

How a middle school P.E. teacher is transforming the lives of his students

When Benny Mendez asked his middle school P.E. students why they wanted to participate in STOKED—his new after school program where kids can learn to skateboard, snowboard, and surf—their answers surprised him.

Never having seen snow is understandable for Mendez's students, most who live in Inglewood, CA, just outside of Los Angeles. But never having been to the beach is surprising, since most of them only live 15-20 minutes from the ocean. Mendez discovered many of them don't even know how to swim.

"A lot of the kids shared that they just want to go on adventures," says Mendez. "They love nature, but...they just see it in pictures. They want to be out there."

Mendez is in his third year of teaching physical education at View Park K-8 school, one of seven Inner City Foundation Education schools in the Los Angeles area. While many of his students are athletically gifted, Mendez says, they often face challenges outside of school that limit their opportunities. Some of them live in neighborhoods where it's unsafe to leave their houses at certain times of day due to gang activity, and many students come to his P.E. class with no understanding of why learning about physical health is important.

What Mendez can control is what he gives his students when they're in his care, which is understanding, some structure, and the chance to try new things. Mendez wakes up at 4:00 a.m. most days and often doesn't get home until 9:00 p.m. as he works tirelessly to help kids thrive. Not only does he run after school programs, but he coaches youth soccer on the weekends as well. He also works closely with other teachers and guidance counselors at the school to build strong relationships with students, and even serves as a mentor to his former students who are now in high school.

Now Mendez is earning accolades far and wide for his efforts both in and out of the classroom, including a surprise award from Yoplait and Box Tops for Education.

Yoplait and Box Tops are partnering this school year to help students reach their fullest potential, which includes celebrating teachers and programs that support that mission. Yoplait is committed to providing experiences for kids and families to connect through play, so teaming up with Box Tops provided an opportunity to support programs like STOKED.

Demonstrators hold up signs at the Rally for Abortion Justice in Columbus, Ohio

The U.S. Supreme Court's swing to the right under the Trump presidency puts abortion rights in peril throughout the United States. The Court's decision not to act on a Texas law that bans abortions after about six weeks has opened the floodgates for other states to restrict freedoms.

The Texas law deputizes its citizens to report those who've had an abortion after the fetus has a heartbeat or anyone who assisted in the process. Reporters whose information leads to a successful conviction can be awarded up to $10,000 by the state.

The law is astonishing in a state that claims to value freedom. What's more authoritarian than paying your citizens to snitch on each other for their personal health decisions?

Keep Reading Show less
abortion
Get stories worth sharing delivered to your inbox
By signing up you agree to Upworthy's privacy policy.
Trending Stories
comedy
Culture

A Black family in Virginia is being subjected to a bizarre, racist assault every time they step outside