Read a powerful confession about mental illness from a best-selling author. 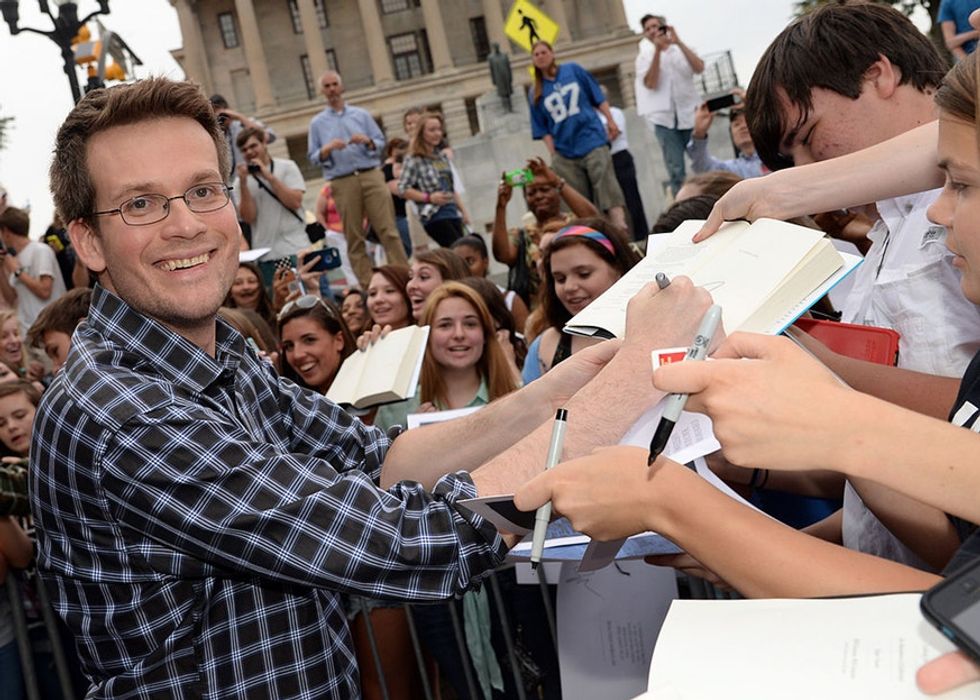 In general, he's a pretty honest dude, which is why it's not surprising that he got real during a recent speech at the NerdCon: Stories convention in Minneapolis.

During the speech, the "Fault in Our Stars" writer (and popular vlogger) detailed three specific mental breakdowns he's experienced in his life. He later shared the speech on Medium, too.

Green (left) at the Nashville red carpet and fan event for "The Fault in Our Stars." Photo by Rick Diamond/Getty Images for Allied.

The whole thing is pretty powerful. But in the most moving moment, he admits to going off his medication. By choice. As recently as last year.

He described the visceral experience of going off his meds:

"For a couple months, I am a passenger in my consciousness. It’s terrifying, in a horror movie kind of way, to be unable to control your thoughts . ... I feel that I am the demon, clinging to a self that is at its core no longer mine."

He also explained the reason for his self-imposed psychiatric vacation:

"I went off my medication to try to write a novel, because I bought into the dangerous romantic lie. I’m embarrassed to tell you that, but yeah. I hadn’t written a book in years, and I felt desperate to write something. I blamed my medication, so I decided that to write, I would go off of it. ... Here is what I wrote during the collapse of last year: Nothing that made sense."

He's hardly the first creative person to give in to the dangerous notion that mental angst makes your work better.

But the fact that this doubt happened so much later in his career, after years of success, shows just how pervasive that myth can be. Green isn't an up-and-coming author looking for a shortcut to success — he's written five New York Times best-selling novels, two of which were made into hit films. Time magazine named him as one of the most influential people in the world.

Despite all this, he still decided that letting his mental illness run rampant was the best thing for his career. That's not an indictment of Green's decision-making skills. It's proof of the irresistible allure of the dangerous myth of artist as a "mad man."

John with his wife, Sarah, at the Time 100 Gala. Photo by Dimitrios Kambouris/Getty Images for Time.

It's the same story we've heard before, from Vincent van Gogh to Sylvia Plath to Robin Williams and beyond.

To this day, Ernest Hemingway's famed alcoholic revelry tends to distract us from the fact that he took his own life. Maybe The Beatles did reap some benefits from LSD — but that same drug contributed to Philip K. Dick's psychotic break and obsession with schizophrenia. And how many famous musicians have died directly from addiction?

There have been a lot of studies done on the relationship between mental health and creativity, and they all support the same conclusion: Creative types tend to be at risk. And yet, this idea that mental suffering contributes to artistic success persists.

"Romanticizing mental illness is dangerous and destructive just as stigmatizing it is," Green said.

"You can be sane and be an artist, and also that if you are sick, getting help  —  although it is hard and exhausting and inexcusably difficult to access  —  will not make you less of an artist." he added.

"I have written my best work not when flirting with the brink, but when treating my chronic health problem with consistency and care."

Mental health is still all-too-often stigmatized, which is why it's so important when highly visible figures speak up about their own struggles. Green's confession was a powerful reminder that success alone can't solve these problems — and that even people who look like they're on top of the world are still receptive to that treacherous temptation.

I'm just glad he figured this out before it was too late.