Our cultures were a divide in our relationship. Here's how we married them. 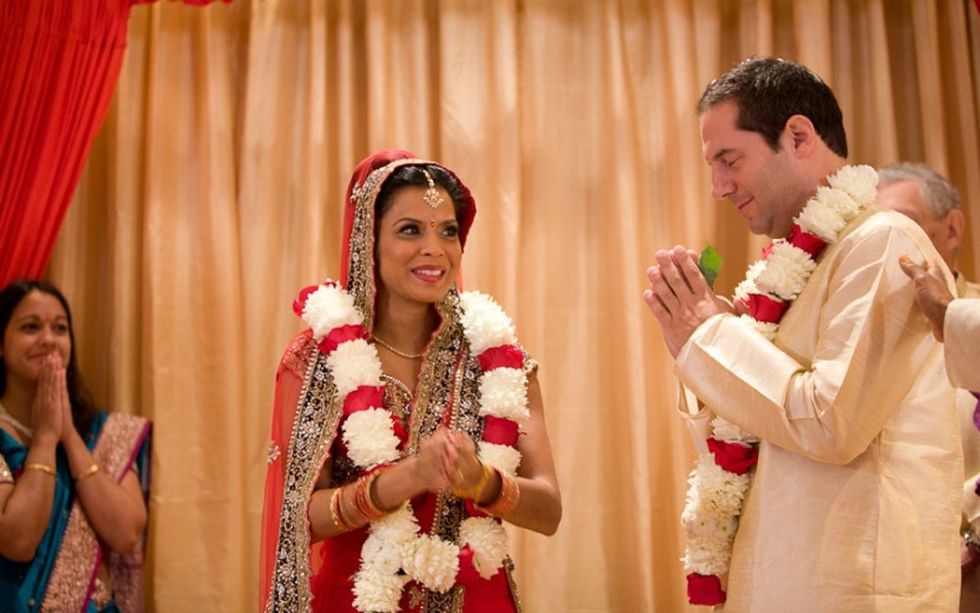 This story first appeared on The Mash-Up Americans.

Sign up here for The Mash-Up American newsletter: Get smart and be delighted as you get to know America!

I dated my husband for almost seven years before our wedding. We've now been married for two. He’s Jewish; I’m Hindu.

It wasn’t until five months into our marriage that the divide between our cultural backgrounds and religions become apparent.

It began with brisket.

The evening started benignly enough — we were trying to decide if we were going to host his family for Passover that year, our first as a married couple. In the midst of planning, our conversation escalated when I pointed out I knew more about his culture and religion than he did. It ended in a huff when I was able to explain how to make a perfect brisket, but he couldn’t tell me what sambar, a lentil-based South Indian vegetable dish, was.

Seth and me. Image via Hitha Herzog, used with permission. ‌

When I first met Seth, I knew how important Jewish culture was to him, even though he wasn’t religious. I made it a point to learn about Judaism.

I studied the diaspora of his relatives from Hungary and Russia to Princeton, New Jersey, via the Lower East Side and the Bronx. I researched Jewish history and visited museums. I learned how to make a perfect potato pancake and read up on what each of the eight Hanukkah blessings meant. I happily called myself a Hind-Jew. Because in my mind, that’s what I was becoming — a balanced, super in-tune mix of my culture and his.

Despite having had a four-day wedding that included separate Hindu and Jewish ceremonies, though, my husband had no idea who he was (culturally) marrying.

Sure, he was schooled on the several ritualistic steps of our Hindu wedding ceremony. He was present for the house-blessing puja we hosted when we bought our first apartment on the Upper West Side.

But he still didn’t understand why I kept vegetarian on Saturdays (a day devoted to Lord Venkateswara, an incarnation of Vishnu, something I have done since birth) or why it was imperative that we always take our shoes off in the house. His understanding of what it meant to be a Hindu Indian was straight from a Mindy Kaling script, peppered with “tiger mom” quips.

Food was a whole other issue.

Seth wasn’t used to eating spicy food, so instead of having my weekly thali complete with idli, potato masala, and a dosa, a South Indian breakfast array that I had turned into a dinner tradition, I swapped it out for a weekly trip to our favorite Chinese joint. Secretly, I was afraid I was becoming more “Jew” in the delicate Hind-Jew equation I created for myself, and it scared me.

‌Passover. Seth as Moses, and me as I prepare the perfect brisket. Image via Hitha Herzog, used with permission.‌

We were a few weeks out from our wedding when Seth and I started talking about our future kids.

“We are going to raise them Jewish,” he said with finality.

“OK...” I said, giving him the side-eye, slightly bewildered.

Turns out discussing brisket is great for surfacing a hidden identity crisis.

I was right to be nervous. Though he’d always said he didn’t want me to convert to Judaism, once we were engaged and talking about our future kids, he’d had a change of heart.

And just like that, another weight had been added to the “Jew” side of the Hind-Jew scale. But I loved this guy. I tucked away my anxiety, and suddenly, five months later, we were married and facing our first Passover.

“How would you like it if I made an executive decision to raise our kids Hindu?” I shouted. “I thought our kids were going to be raised knowing both religions. And now you are saying they can only be one?”

“It’s important to me for the kids to be raised in the Jewish faith.”

Seth took a step back and sat down at our enormous kitchen table, a place I had envisioned our kids studying for Hebrew school and reciting lines from the Mahabharata.

“Where is this coming from? We were just talking about brisket!” He genuinely looked perplexed.

“You said you wanted me to convert so our kids could grow up Jewish!” I shrieked. I was getting upset but for reasons only I could understand. It wasn’t even the conversion part that upset me. I had spent so much time learning about his culture and religion in our relationship that I was 75% there. I was upset because I felt like I was losing myself. I had already changed my name to Herzog when we got married. Now I had to give up a large part of my identity? No way.

Seth paused for a moment before he spoke. “It’s important to me for the kids to be raised in the Jewish faith.”

Our conversation wasn’t going anywhere, so I dropped it for the moment.

We hosted Passover. It was a week before a trip to India to visit my extended family. During the dinner, Seth talked about his excitement and fear swirling around the trip, since it was his first time there.

“I’m sure I’m going to get diarrhea,” he said with a smirk. “But at least I will lose some weight!”

Our guests doubled over in laughter. My heart sank as I passed around the matzoh ball soup, which I had made from scratch. I didn’t want to ruin the fun everyone was having by dismissing such a backward notion of India, but I was heartbroken. The Hind-Jew scale had practically fallen over. I cried myself to sleep that night.

Something happened during our week abroad. The minute we touched down in Hyderabad, all the preconceived ideas Seth had about India vanished. He was enthralled and eager to learn.

I took him to all the ancient sites in town, and he stood and said nothing; instead, he let the sensory overload of noisy auto rickshaws, street anarchy, and the smell of petrol and street food take over. He met my extended family. They embraced him like a son. They overfed him South Indian delicacies of biriyani, a savory chicken and rice dish native to Hyderabad; tamarind and yellow rice; pesarattu, a mung bean pancake; and upma, a savory porridge made from rice flour.

My heart burst when he asked for seconds. It shattered in a billion pieces when he went in for thirds.

‌Seth with Sarah, one of seven Jews left in Cochin, Kerala. Image via Hitha Herzog, used with permission.‌

One night, my family pulled together a “small” Hindu reception of 100 people in the courtyard of our family’s apartment building. They wanted to welcome Seth and celebrate our wedding and give blessings. Seth was so touched by the gesture, he cried.

Later in the week, we ventured to Cochin, in Kerala, where we hung out on a houseboat for three days as the second part of our honeymoon. Seth got to see how diverse the religious landscape of India really is when we visited a Syrian Christian church that had been in town since the 1300s.

“This place is awesome,” he said. Day five into the trip, he still wasn’t sick and continued to take second helpings of the food.

Our last day in Cochin was a significant turning point in our Hind-Jew negotiations. Seth and I visited a section of the city called “Jew Town.” Historically, this was where most of the spice trade happened in the city. It was an ancient section, beautifully preserved with a 500-year-old synagogue at the end of the street. While walking back to our car, we stumbled upon a shop that sold handmade bread coverings for Shabbat. The coverings were made by a 92-year-old Jewish woman named Sarah Cohen, whose family had settled in Cochin nearly 400 years ago. She was one of seven Jews left in Cochin.

Seth and I spoke with her about her family, her faith, and what it meant to be an Indian Jewish woman. She showed us pictures of her family from the 1800s and of herself from 1940. When Seth and I left, she started to cry and said, “Please come visit me again soon, my days are numbered!” Something changed in both of us that day.

On our way back to the States, we talked about Cochin and my family.

Seth, unprompted, said: “I want our kids to be raised Jewish, but it’s important to me for them to know their Hindu roots. And they can ultimately decide what they want to do.”

I couldn’t believe what I was hearing. Could our travels have changed his perspective on our future family? He didn’t elaborate, but when we stepped off the flight I knew he was a changed person. I was, too. I no longer felt the pressure to convert, or the weight of my hidden anxiety over the Hind-Jew scale. Even if I do convert, I know that I won’t be losing myself; converting will be a chance to access another faith while still holding on to my traditions.

At least I know that Seth was changed in one dramatic way. Instead of an “Indian” diet, he had to go on a diet when we got back to the U.S. after gaining 10 pounds from eating so much incredible South Indian food — the same food that he now asks me to make alongside the brisket.