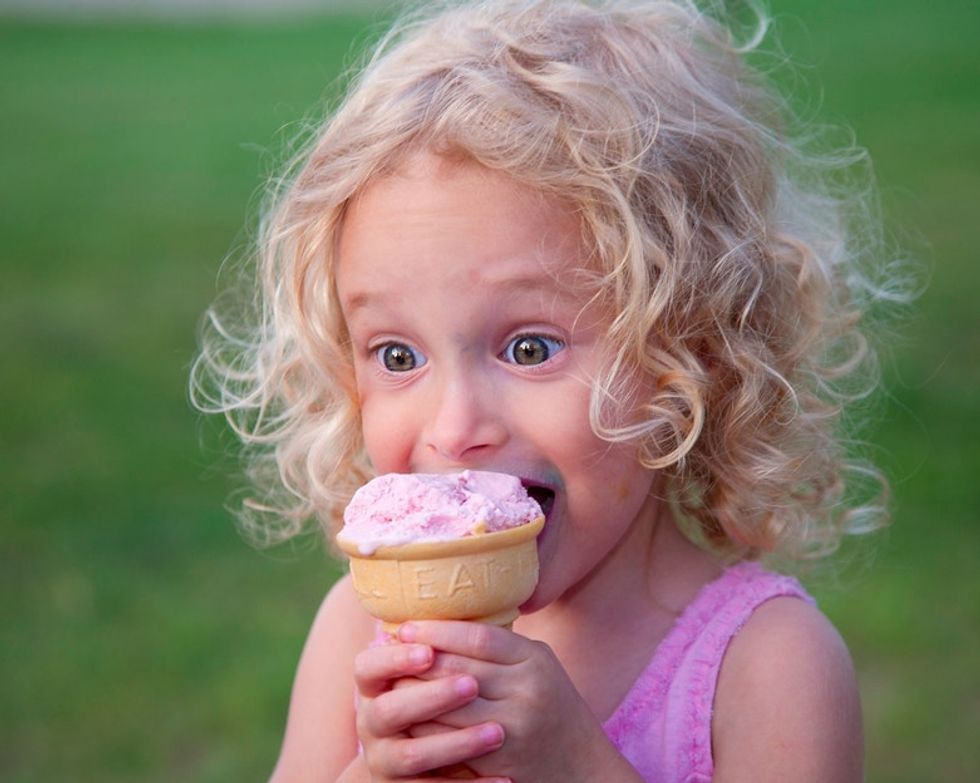 Based on my personal calculations, approximately 600 trillion ounces of ice cream go to waste each year because of melting.

And you don't even want to know how many spritzes of 409 it takes to clean it up off the kitchen floor. Or how many children's tears are shed in the process.

That cone is about two seconds away from disintegrating entirely. Photo by George Thomas/Flickr.

I don't think it's an exaggeration to say that maintaining optimal ice-cream-eating conditions has been one of humanity's most vexing puzzles for centuries.

The joy of a frosty ice cream cone in the heavy, sweltering summer heat is so immense, yet so fleeting. Eat it too quickly, you get brain freeze. Too slowly, and you've got liquid Neapolitan running down your hand.

It's enough to make anyone feel a little ... heated.

Here's the new scoop: Scientists just found a way to make our ice cream melt a little more slowly in the summer.

Dippin' Dots were supposed to be the future. Sadly, the company went bankrupt in 2011. Photo by newwavegurly/Flickr.

See, an ice cream's melt-rate is usually based on something called its "overrun," or, in other words, how much air and other non-dairy stuff is in it. Cheaper ice cream brands use more emulsifiers, which is just a fancy word for things added to processed foods to help stabilize them so they melt more slowly. Premium ice cream brands (you know, the ones where the brand name is written in cursive) use a much higher percentage of natural ingredients and flavorings, so they're a lot more susceptible to melting.

According to researchers, BsIA — which naturally exists in plant roots and is used to ferment foods — helps bind together the air, fat, and water in ice cream to make it more resistant to those warm temperatures.

That means we're one step closer to rich, ultra-premium ice cream that doesn't immediately dissolve the moment you step into the sun.

And the cherry on top? This new super ice cream could hit shelves in the next three to five years.

Of course, not everyone is happy about this innovation, namely family dogs and local ant colonies that typically look forward to claiming those sugary puddles of ice cream as their own.

But for the rest of us, BsIA will soon give way to an entirely new world. One where enjoying a frozen treat on a hot day is no longer a race against the clock. One where the inside of ice cream shops doesn't have to be an unbearable 15 degrees. One where life's finest decadence can be savored, not scarfed — the way it was always meant to be enjoyed.

Someone get these researchers a medal. Or better yet, take them out for a sundae.

This article originally appeared on 08.31.18

In October 2016, that was a quote from Albert Einstein that sat atop the Facebook page of Tim McMillan, a police officer in Georgia.

McMillan become a sensation after a post he wrote on his Facebook wall went viral in 2016. In his post, he explains how he pulled over a black teen for texting while driving: