German soccer fans turned on a racist heckler, punctuating his exit with an anti-Nazi chant 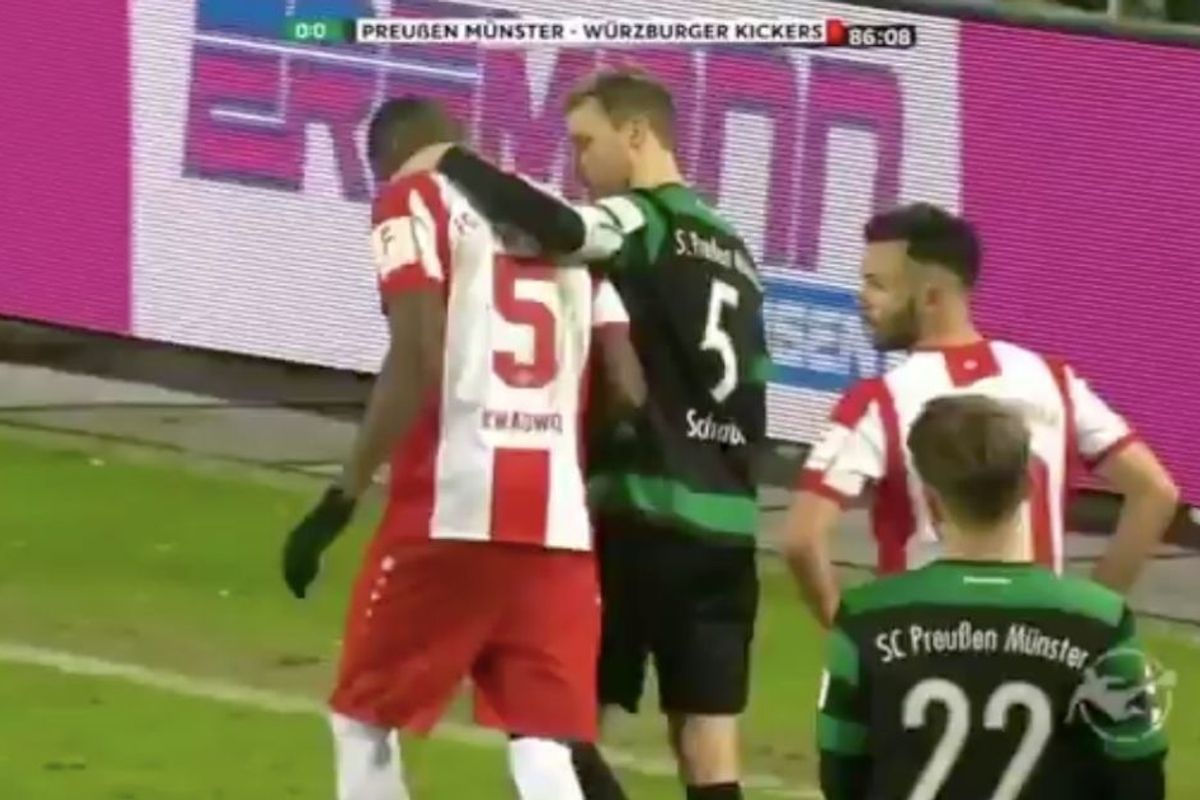 As a soccer match between German teams Preussen Munster and Würzburger Kickers went into its final minutes, a defender from the Kickers, 23-year-old Leroy Kwadwo, stopped to point out a problem in the stands.

A Munster fan was making monkey noises at Kwadwo, a black player of Ghanaian descent. It was a clearly racist heckling—an issue that has publicly plagued the international sport in various venues, even as recently as last week. But this time, the response from the crowd far outshined the racist in the stands.

First, the man was quickly identified by his fellow Munster fans and ejected from the game. While stewards escorted him from the stadium, the crowd chanted, "Nazis out! Nazis out!"

Some fans also stood and applauded Kwadwo and the player received supportive pats on the back from opposing team members as well.

This is how it's done, folks.

Kwadwo thanked fans via social media the next day for their "exemplary" reaction, the Associate Press reported:

"I was racially abused by one single spectator. It just makes me sad. I indeed have a different skin color, but I was born here in this wonderful land that has given my family and I so much and made so much possible. I am one of you. I live here and can live my calling as a professional with the Würzburger Kickers.

Something like yesterday just makes me sad and angry because everyone has to know, racism does not belong in OUR world. We all have the opportunity to oppose it and stop it if it happens."

Munster said it would seek to ban the racist fan from all German stadiums for three years, which is the toughest sanction the sport itself can implement. However, the man also faces legal consequences and is being charged with incitement.

"As repulsive as the monkey noises against the player were, the subsequent response from the rest of the spectators were so impressive," the Preussen team said in a statement.

According to CNN, Preussen Munster president Christoph Strasser said of the heckling: "It is not something that belongs on the soccer field and certainly not in our stadium. We don't want and need people like that here. We clearly distance ourselves from such statements and I apologized to the Würzburgers immediately after the game."

If we have to live with nasty racists in our midst, it's at least encouraging to see a huge crowd reject it with such immediacy and fervor. Nazis out, indeed.