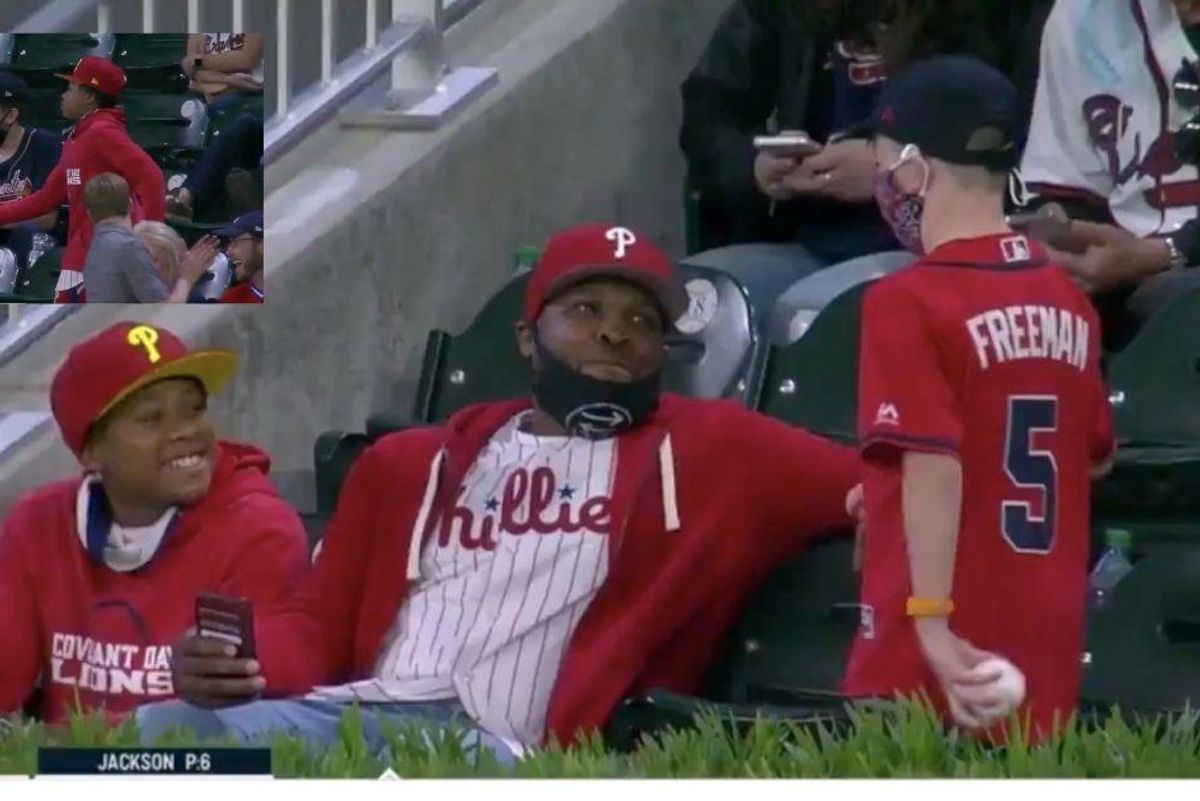 In all sports, competition can get fierce, especially at the professional level. But two young baseball fans showed us this weekend that sports are really all about fun and connection first with a beautiful show of sportsmanship, kindness, and gratitude.

It happened at a game between division rivals, the Philadephia Phillies and the Atlanta Braves, at Truist Park in Atlanta Saturday night. Joshua, a young Phillies fan, happened to be sitting near the spot where Braves first baseman Freddie Freeman landed a home run in the top of the ninth. Joshua didn't quite manage to catch the ball in his glove, and it fell down into the bullpen. When someone grabbed it and tossed it up to him, he missed that catch, too—twice. Cameras caught him and his dad in a funny exchange, as Joshua got some light, good-natured ribbing from his old man.

But that wasn't the moment that really caught people's attention. Instead of keeping the home run ball for himself, Joshua took it over to a young Braves fan who was wearing a Freeman jersey and gave it to him. After excitedly showing the prized ball to his dad, the boy went over to thank Joshua and his dad.

The whole exchange was just so wholesome, encapsulating how sports can—and should—bring people together. Even though they were rooting for opposite teams, the mutual respect and sportsmanship shown by these two boys is a lesson for all of us.

People loved seeing all of this play out on film, including the Phillies and Braves themselves. In fact, Freddie Freeman surprised Johsua before the following night's game by personally giving him a baseball signed by him and Phillies right fielder Bryce Harper.

Both teams shared their admiration for Joshua's generosity on social media.

Many commenters remarked that Joshua's father is clearly raising his son right, as is the dad of the kid who came over to say think you. Joshua's dad, James Scott, said that the action of his son was in "the DNA" of the family—to "pay it forward in love," as he wrote on Twitter. He referred to the exchange as "a great moment of humanity."

When we are immersed daily in stories of division, and as humanity works through the very real issues of all kinds that we have to fix to get past those divisions, it's wonderful to be reminded of the beautiful ways people can touch one another's lives in ways big and small. In this case, a mutual love of baseball, despite the on-field rivalry of the two teams, and the basic act of a kid brightening a stranger's day reassure us that the ills of society are not all that we are.

It's so easy to focus on the negative news, and it's so easy to get bogged down by the vast amount of work to be done to help us get to a place of true unity, equality, and justice. Seeing these small moments, these seemingly minor gestures, these glimpses of human connection help sustain us through that work.

It may have been a simple act, but the impact of it is profound. Thanks to these gentlemen for filling our hearts for a moment and reminding us what the best of us look like.

From Your Site Articles
Related Articles Around the Web
inspiring
Culture