Fashion has always helped move the needle forward. So we created our own store. 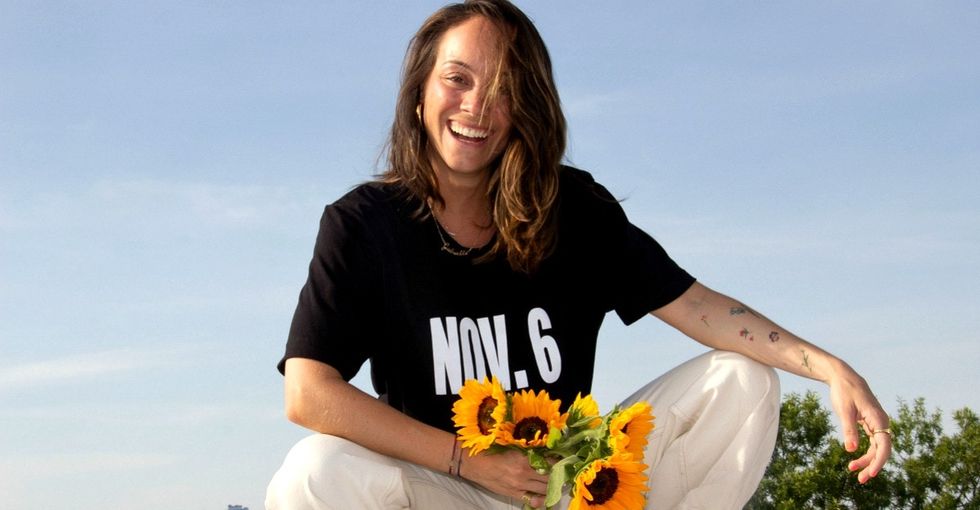 "Power to the People." "United We Shall Overcome." "Make Love Not War." Why do these phrases still resonate 50 years later?

It's partly because they became power slogans that united passionate activists around the country standing up for what they believed in.

It's also partly because they appeared on millions of posters, buttons, and shirts sported by passionate protesters during the late 1960s.

At that time, polarizing government actions and unaddressed injustices had led to a starkly divided nation that left many people feeling voiceless and powerless. But instead of sitting back, they took to the streets, protesting these injustices as often as they could. They traveled across the country to confront President Richard Nixon in Washington, D.C. They made considerable efforts to encourage social change in their own backyards.

Even when they weren't actively demonstrating, it became common practice for activists to wear their missions proudly, like bold badges of support.

Not only did this help encourage a unified front, it likely stirred up dialogue between people with differing opinions who might not otherwise engage. Those conversations may not have always been constructive, but the mere possibility of them was a step in the right direction.

These emblems helped keep important issues on people's minds, reminding everyone that there's still more work to be done.

Reflections of the 1960s activism culture are clearly visible in today's youth.

A prime example is the thousands of students who walked out of their schools on April 20, 2018, in protest of the lack of harsher gun laws. Many of them wore orange in solidarity.

It's not surprising that activism is on the rise given the similarly tumultuous time in which we find ourselves. It's also oddly fitting considering it's the 50th anniversary of so many iconic student protests, including Kent State, Columbia University, and the Paris riots. Those young adults were also fighting for change against a government run by an older generation bent on upholding the status quo. The only difference is that today, protesters are armed with a much more powerful mouthpiece than their own voices: the internet.

Thanks to such a pervasive rallying device, protests are happening more often and on many different levels. From solidarity movements like #MeToo to donation-based demonstrations like those made to Planned Parenthood in Mike Pence's name, activism is evolving in inspiring ways. However, what's perhaps most exciting is how much activism is going on in real life despite the stereotype of internet slacktivism.

People are realizing that showing up for causes they believe in is still the most effective way to send a message. And wearing a unifying symbol helps strengthen their mission.

Consider the millions of pink pussy hats people wore to the Women's March that spanned the world on Feb. 21, 2017 — the day after Inauguration Day in the U.S.

Or the safety pin movement that sprung up in opposition to the rampant xenophobia of 2017.

These emblems helped protesters see just how many people are standing behind them, even if they're not all in the same place at the same time. They also kept the movement on everyone's minds.

Clearly, fashion can play a pivotal role in moving the needle forward. That's why we at Upworthy and GOOD have created our very own collection of wearable items for our audience to wear proudly in 2018.

We're calling it PSA Supply Co., and it's designed to help people like you share positive, solution-oriented messaging about the future of our country and our world. Gone are the days of sitting on the sidelines.

Both publications are platforms where people go already to be inspired by artists, big thinkers, activists, and impactful nonprofits; this lifestyle-brand arm will be an extension of that. Our hope is that it will also inspire people to connect with others and spark necessary conversations about change.

But the mission here isn't just to spread inspiring messages. From production to sale, these goods are giving back in a big way.

PSA makes all its merchandise in partnership with Social Imprints — a manufacturing company that employs at-risk adults — including those who've been formerly incarcerated, veterans, and recovering addicts — in order to give them a second shot at a successful life.

And 10% of every sale of this round will go to the Center for Community Change Action — a nonprofit that strives to empower low-income people to create change in their communities and across the country. Many of these individuals have been severely affected by the new policies of our current administration. That's why this organization is committed to getting their voices heard by people who can do something about it.

This week, we officially launch our first suite of products ranging from a simple "Be Nice It’s Cool" to a plain white T-shirt featuring any senator's phone number you want.

But our favorite? "Nov. 6." This election (and every election) is a big one, so wear this shirt proud and remind your friends and family that their vote counts.

If you're not a T-shirt fan, there are also buttons and tote bags available that carry bold messages like "Fear less" and "Give a damn!"

It may seem silly to think that a phrase on a T-shirt or button could make a difference in the face of so much discord. But judging by history, a little message can resonate for decades if it's powerful enough.

Inciting change is a long and arduous process, but the more people who stand behind these movements, the quicker they'll move forward.

It starts with identifying what your values are and how you can help make them universal. So, what change do you want to be?