Everything you like is Team Jedi, and everything else is Sith. That's not OK.

We're making the same mistakes they made a long time ago in a galaxy far, far away. 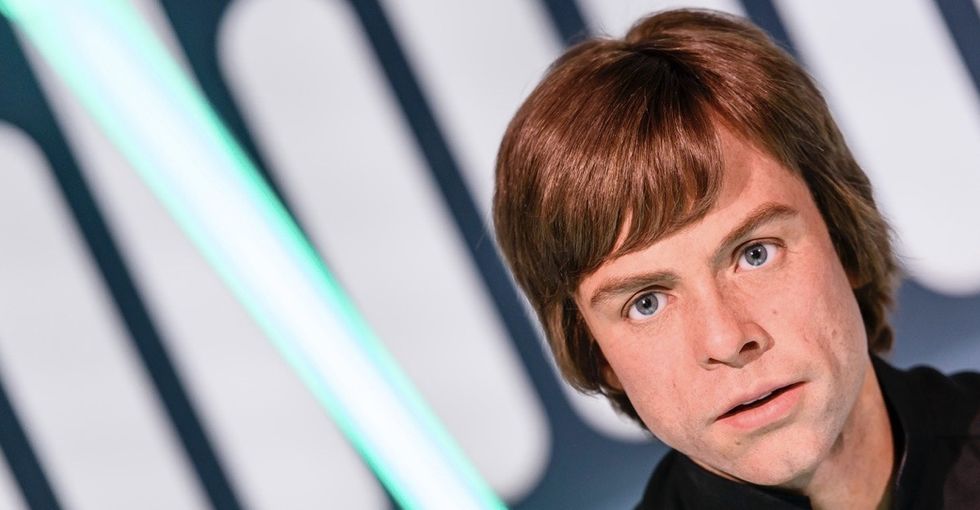 There once was an orphan who lived in the desert.

Raised on a farm by his aunt and uncle, the only opportunity he could see to free himself from a life of poverty was to join the military. But then tragedy struck: Government soldiers destroyed his family, home, and livelihood — all because of some questionable intelligence.

A devout old veteran soon befriended the boy, filling his head with fantasies of glory, strength, and war. At the man's behest, the boy joined a radical guerrilla force and within days had bombed the most expensive piece of government property ever created, murdering hundreds of people in the process.

Obviously I'm referring to Luke Skywalker. Who else?

To be clear: I don't actually think that Luke Skywalker is a terrorist. I mean, we're talking about a fictional character here.

But framing the story that way wasn't difficult to do. After all, that's the entire point of fiction: to understand the world (or galaxy as the case may be) through someone else's eyes. And nowhere is this experience more powerful than in those timeless, grandiose mythologies like "Star Wars."

That's why Luke Skywalker is the Democrat raging against police states and corruption.

And he's the Tea Partier trying to return the nation to the freedom and religious values of yore.

He's the Libertarian crusading against government oversight, wishing for a world where even Wookies thrive on meritocracy.

Or, ya know, a radical religious terrorist. Your space-mileage may vary.

It's so easy for us to put ourselves into the hero's shoes, and that's exactly why these stories resonate with so many people.

But at the same time, it's easy for all of us to make "the other guy" seem like the villain, regardless of their actual beliefs. We all want to be the one who fires that proton torpedo and destroys the Death Star, defeating The Enemy and making the galaxy safe for The Good Thing We Believe In.

If we are all Luke Skywalker, orphaned son-turned-aspiring Jedi knight, then anyone who disagrees is a mustache-twirling, Force-lightning-crackling Sith lord, no questions asked.

Nothing is purely good or evil. Reality is messy, ugly, and hard. We get so bogged down in the Jedi stuff ('cause let's face it, that stuff's awesome), that we don't think about the Stormtroopers, for example. Are they stand-ins for the Nazis who were just following orders? Or are they the same as American soldiers, fighting for their righteous beliefs in a free market economy that allows the Hutts and other hard-working entrepreneurs to thrive? Maybe they actually are trying to protect the people from the random, scrappy actions of those religious extremists in the Rebel Alliance.

Or maybe all those assumptions can co-exist. Maybe our empathy shouldn't stop with the protagonist.

Empathy is one of the major themes of "Star Wars." That's why we still love it, still talk about it, and still need it.

Let me tell you about another young orphan boy from the desert, one who was also born into economic struggle. This boy was also seduced by religion, and committed himself to a life of righteousness rather than acknowledging his own human flaws.

He, too, loses everyone he loves. As a quadriplegic man, he overcomes adversity by committing himself to the opposite extreme, rising through the ranks of the military to become a renowned leader and warrior.

And yet he struggles to connect with people — specifically, with the family that he never knew he had. Every attempt he makes just perpetuates that same endless cycle of poverty and abuse that he grew up with. Until one day, he learns to find the balance between the polarized extremes of his light and the dark sides.

But everything changes when, with his last mortal breath, Anakin Skywalker absolves his estranged son and frees him from that same unending cycle.

That's the most important lesson we can learn from "Star Wars": real life doesn't have a Dark Side and a Light Side.

I'm not saying that we should all be rushing to throw any emperors down Death Star shafts. But what happens at the end of "Return of the Jedi" is powerful because it breaks the cycle, freeing the galaxy from the overly-simplistic binary of the Light Side and the Dark Side. Vader embraces both sides of the Force — seeking goodness while accepting his flaws and finding a better way through the center.

That's what it means when they talk about bringing balance to the Force. It's not about the eternal struggle of good versus evil — it's about going beyond those oversimplified extremes and embracing empathy as well as ambiguity.

Note: By "ambiguity" I don't mean "amoral mercenary feared throughout the galaxy." Photo by Josh Hallett/Flickr.

There are Republicans, and there are Democrats; and whichever side you're on are the righteous Jedi knights, with the opposition being unequivocally Sith.

There's patriotism, and there's terrorism; and there's no room for nuance when freedom is on the line.

You're a capitalist or a communist; your god is right or you're an evil heathen; you're a lazy welfare moocher or a self-made success who earned everything you have.

It was the Empire against the Rebel Alliance; now it's the First Order against the Resistance. What did Darth Vader die for if we're still stuck in that endless cycle of polar opposition?

As long as there's an "us" and "them," we'll always keep on fighting.

As sad I would be to not have another "Star Wars" film — and as fun as it is to come up with absolutely ridiculous readings of my favorite stories — I'd much rather live in a world that goes beyond that same eternal struggle and where well-meaning people can exist in the grays between the Dark and the Light.

May the Force be with you, in any shade that understands the human struggle.