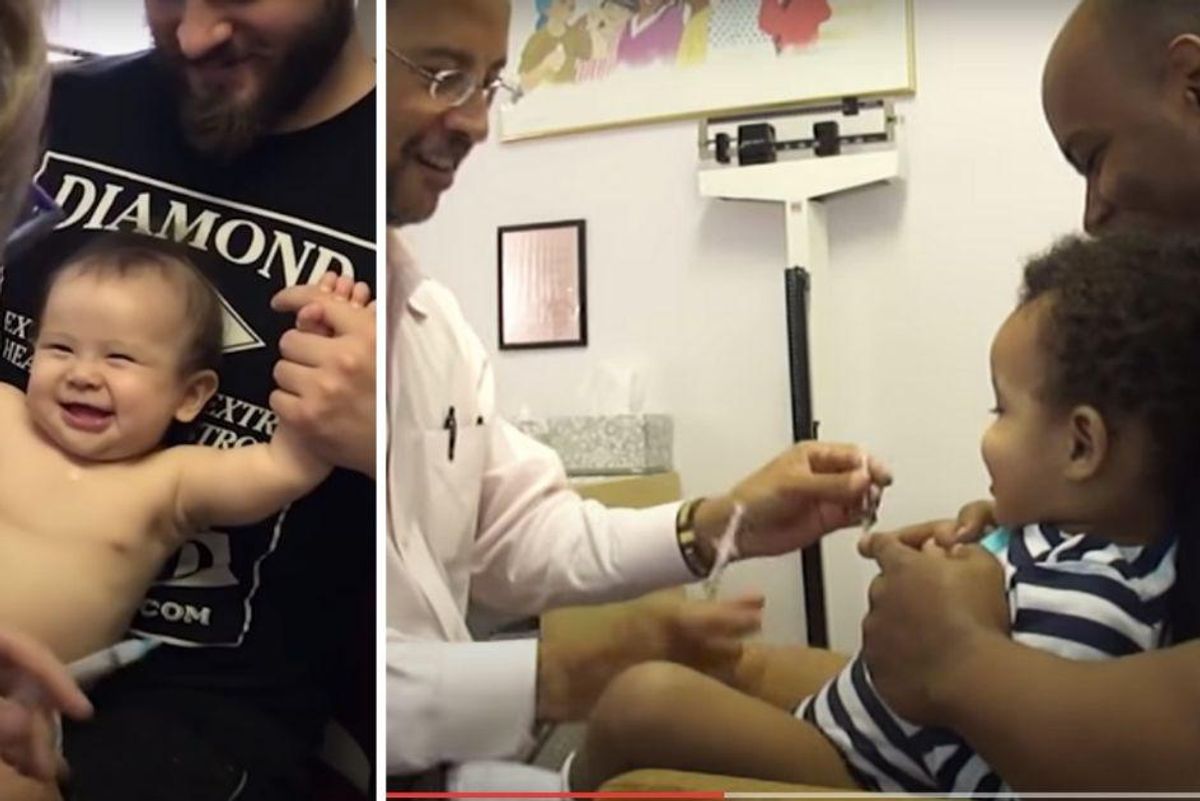 Unless you're an actual masochist, nobody likes being poked with needles. But some of us hate it a whole lot more than others. If you're of the "Eh, no big deal—just get the quick shot and be done with it" mindset, you're in good company. But if you're in the "I can't handle the idea of a needle coming anywhere near my flesh" camp, you're also in good company.

Some pediatricians have developed methods for giving little kids vaccines in a way that results in the least amount of trauma. Our kids' doctor has a flower-shaped plastic device with little bristles on it that they push onto the kid's skin, distributing the sensation as the needle goes in, for example. But some docs takes it to a whole other level.

Tapping the baby with the covered needle like a game makes the needle itself seem not scary. Then, distracting them with the quick poke and then something super fun right after—the bubbles—appears to be a winning strategy.

Here's a different baby with the same doc, same routine, and same result. You can definitely tell the babe has a "Whoa, wait a minute, what just happened?!" moment, but it's short-lived.

Another doc takes a similar approach with a toddler. This time, as the kiddo is a little older and more aware, the "Whoa, wait a minute" reaction comes with some verbal complaint. But the doctor knows just how to handle it, and it's incredible to see the immediate turnaround from a simple, silly tissue toss.

Baby laughing while getting shots www.youtube.com

Adults certainly don't want doctors to start throwing tissues in their faces after getting a vaccination shot, but there's something to be said for trying to make the process less frightening. By the time people are adults, the pain itself isn't so much the issue as the idea of the needle. The silly play with the needle before the injection is one example of how doctors help kids not see the needle itself as scary, and though adults might need a different approach than children, purposeful exposure is actually one of the key strategies to overcoming phobias.

Considering the fact that we're going to need a good percentage of Americans to get the coronavirus vaccine in order to return to non-distanced, non-masked normalcy, doing everything we can to help people overcome their fears of either the vaccine itself or the needles used to give them is important.

Also, considering this dumpster fire of a year, we could all use a little extra TLC. Maybe we can all take our burned out doctors a gift card or something when we ask them to sing a song while they give us our shots. Whatever it takes to get us through this home stretch of the pandemic with as little ongoing trauma as possible.