California is being invaded by crabs. Again. Here's why it keeps happening. 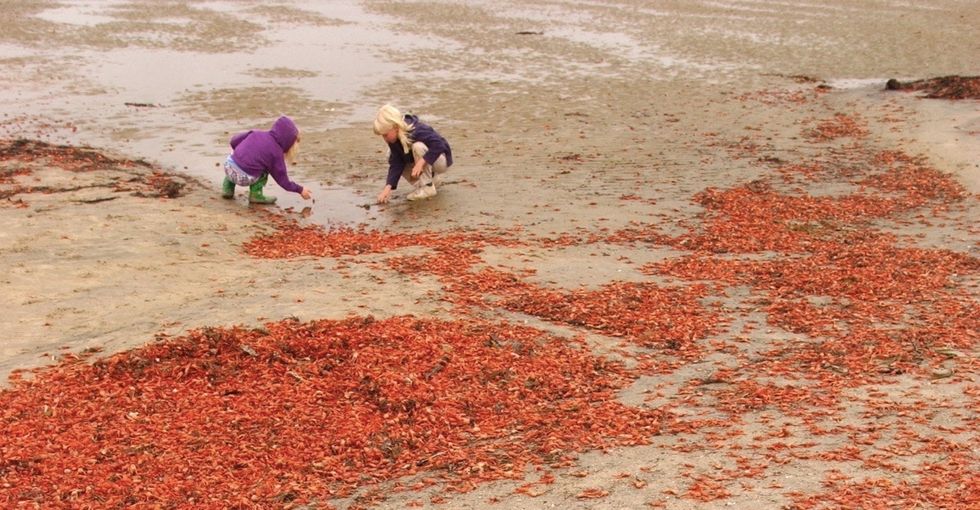 Beaches in Southern California were recently invaded by a creepy-crawly carpet of crustaceans.

People who wanted to take a walk along Newport or Laguna Beach were greeted by thousands of the little red crab-like animals.

The little guys are known as tuna crabs.

Some people also call them langostillas or pelagic red crabs, though they're actually not crabs at all. They're from a related group known as squat lobsters.

Though they look kind of creepy, tuna crabs are pretty harmless.

They're only a few inches long at most, eat plankton, and are food for many different species of animal, including whales, tuna, squid, and sea birds.

Plus, most of the ones that washed ashore seem to already be dead by the time people find them. So no danger — unless, of course, you count the danger to everyone's noses from thousands of dead crabs (eww).

What's weirder than the crabs themselves is that this isn't the first time this has happened.

This was taken in San Diego in May 2002. Photo by David McNew/Getty Images.

So what's making them appear? We think it's El Niño.

El Niño is a phenomenon where warm ocean currents in the Pacific get pushed up against the western coast of Central and South America.

This shoves cooler temperature currents out of the way (and can change weather patterns around the world).

How does this relate to the crabs? Well, the crabs normally like to live in the usually cold shallows off Baja California, but if the water gets really warm — like during El Niño — they'll migrate, moving north in vast swarms towards Southern and Central California.

As the climate changes, we may get more intense episodes of El Niño.

Scientists aren't completely sure how climate change will affect El Niño. While we're certain that the Earth is getting warmer, it's hard to predict how specific weather patterns will change. It's like watching a basketball game: We know the score is going to go up the longer we watch, but it's hard to say whether one particular shot will go in.

We do know that weather patterns will shift, and we know for a fact that the ocean is getting warmer. These factors have led some scientists to predict that future El Niño events will become more intense.

Warmer oceans and — maybe — more intense El Niño events? That might mean we could see these little guys again soon.

We don't know for sure if we'll see tuna crabs again soon, but we do know that climate change will likely force many different plants and animals to shift their ranges. We've already seen it in butterflies and birds, for instance.

As the planet gets warmer, we're going to see more big changes in the animals and plants around us. So these crabs? They might be an early sign of things to come.