After a boy with autism disrupted a Broadway show, this actor leapt to his defense. 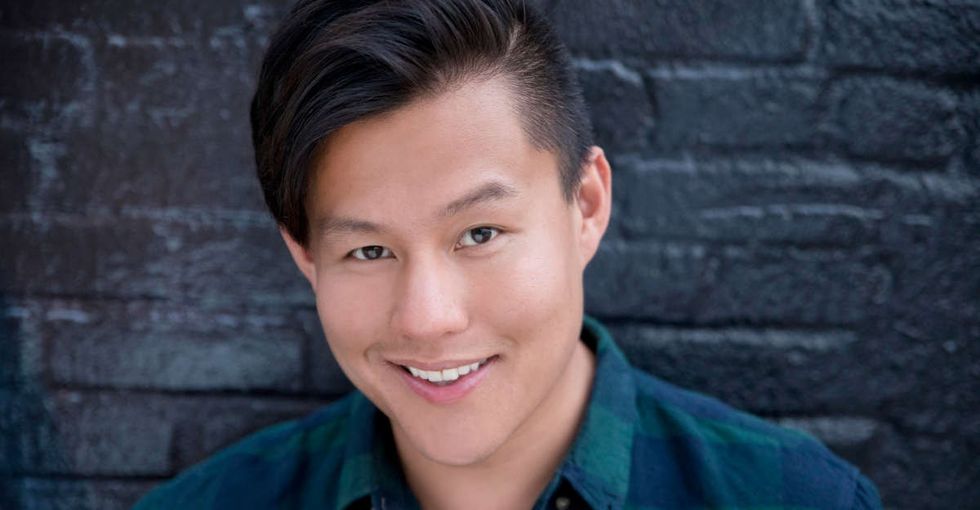 Actor Kelvin Moon Loh was performing in a matinee of "The King and I" on Broadway when he heard a commotion in the audience.

During a particularly intense moment in the show, a young boy in the crowd started yelling and screaming. According to Loh, the boy's mother tried to lead him quietly out to the lobby, but the boy refused to go. A few members of the audience, frustrated by the disruption, started sniping at the mother.

“A few people just got upset," Loh told Upworthy. Even though the boy's cries had made it difficult to keep the show going, Loh couldn't fathom how anyone could give the boy and his mother grief.

It was clear to him that the child had autism.

“I was just emotional when I got off the stage." Loh said.

Loh felt terrible that a woman had worked up the courage to bring her son with autism to his show, only to have other audience members treat him like he had no right to be there.

“I thought that what was happening wasn't right," Loh said.

Later that day, he posted about the incident on Facebook (emphasis mine) and pulled no punches:

"I am angry and sad.

Just got off stage from today's matinee and yes, something happened. Someone brought their autistic child to the theater.


That being said- this post won't go the way you think it will.
You think I will admonish that mother for bringing a child who yelped during a quiet moment in the show. You think I will herald an audience that yelled at this mother for bringing their child to the theater. You think that I will have sympathy for my own company whose performances were disturbed from a foreign sound coming from in front of them.


He proceeded to ask his fellow performers and audience members a very tough question:

"Instead, I ask you- when did we as theater people, performers and audience members become so concerned with our own experience that we lose compassion for others?

The theater to me has always been a way to examine/dissect the human experience and present it back to ourselves. Today, something very real was happening in the seats and, yes, it interrupted the fantasy that was supposed to be this matinee but ultimately theater is created to bring people together, not just for entertainment, but to enhance our lives when we walk out the door again.

It so happened that during 'the whipping scene', a rather intense moment in the second act, a child was heard yelping in the audience. It sounded like terror. Not more than one week earlier, during the same scene, a young girl in the front row- seemingly not autistic screamed and cried loudly and no one said anything then.

How is this any different?"


He then described the moment it all happened, as he experienced it from the stage:

"His voice pierced the theater. The audience started to rally against the mother and her child to be removed.

I heard murmurs of 'why would you bring a child like that to the theater?'. This is wrong. Plainly wrong.

Because what you didn't see was a mother desperately trying to do just that. But her son was not compliant. What they didn't see was a mother desperately pleading with her child as he gripped the railing refusing- yelping more out of defiance. I could not look away. I wanted to scream and stop the show and say- 'EVERYONE RELAX. SHE IS TRYING. CAN YOU NOT SEE THAT SHE IS TRYING???!!!!' I will gladly do the entire performance over again. Refund any ticket because-

For her to bring her child to the theater is brave. You don't know what her life is like. Perhaps, they have great days where he can sit still and not make much noise because this is a rare occurrence. Perhaps she chooses to no longer live in fear, and refuses to compromise the experience of her child. Maybe she scouted the aisle seat for a very popular show in case such an episode would occur. She paid the same price to see the show as you did for her family. Her plan, as was yours, was to have an enjoyable afternoon at the theater and slowly her worst fears came true.

I leave you with this- Shows that have special performances for autistic audiences should be commended for their efforts to make theater inclusive for all audiences. I believe like Joseph Papp that theater is created for all people. I stand by that and also for once,

I am in a show that is completely FAMILY FRIENDLY. The King and I on Broadway is just that- FAMILY FRIENDLY- and that means entire families- with disabilities or not. Not only for special performances but for all performances. A night at the theater is special on any night you get to go.

And no, I don't care how much you spent on the tickets."


Like so many Facebook posts, Loh's message was intended just for his family and close friends. Instead, it traveled around the world.

For Loh, providing that place of safety is why he and so many of his colleagues got into acting in the first place: to find refuge from a world that doesn't always understand.

His bottom line? A theater is a place where everyone should feel welcome.

Theater is democratic. It's communal, and no one deserves to be kept away or told they don't belong. And if that means working through the occasional disruption, then so be it.

Compassion is what matters most.

“It's a difficult choice to lead with love first, but at the end of the day, that's what life is about," Loh said.