After 57 years, Barbie finally gets the makeover that really matters.

She still can't bend her arms, but it's a start. 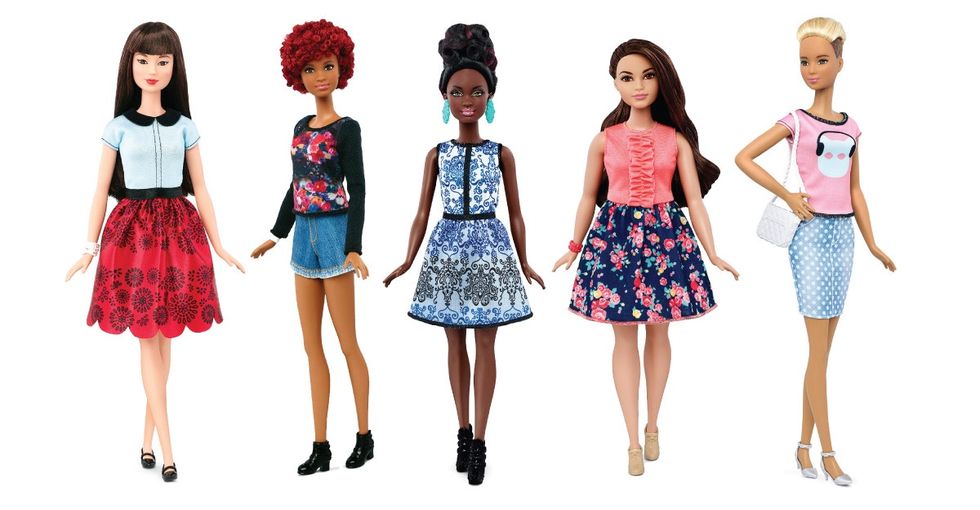 If you're one of the millions of people who've bought Barbie dolls and wished for them to look a bit more like you do, today is your lucky day.

For the first time in her 57-year history, Barbie comes in different body shapes: petite, tall, curvy, and original.

The new dolls are part of Barbie's Fashionista 2016 line. In total there are four body types, seven skin tones and 18 eye colors and hairstyles available — plus some dolls who can wear flat shoes! You can pre-order the new Barbies online or find them in stores everywhere starting in March.

This is a really big deal, and it happened because consumers made it happen.

Consumers have long been asking Mattel to offer Barbie dolls with realistic measurements and received little response. So, they started spending their money elsewhere. In 2014, Barbie doll sales dropped a record 16%. The same year, Barbie lost her title as the world's best-selling doll to Hasbro's Queen Elsa doll. It seems it was finally time for Mattel (Barbie's parent company) to listen to consumers and give them the realistically-shaped dolls they'd been asking for since the last century. After two years of development, we're meeting them for the first time.

They're all still named Barbie, though, which is definitely going to create confusion at the next toy family reunion. Image Image from Mattel.

This isn't the first time Barbie's had a big makeover.

For the first nine years she was on sale, Barbie was only available in one color: white. Christie, a black doll, debuted in 1968, but the first black doll named Barbie wouldn't appear on store shelves until 1980.

Even then, the black, Latina, and Asian dolls weren't really accurate — just Caucasian Barbie dolls in new colors with new hair. It would take Mattel another 20 years to better embrace diversity and release different facial styles.

Celebrate, but not too much, 'kay, girl?

Over the past few decades, Barbie has run for president several times, broken up with Ken, experimented with temporary tattoos, and even renovated her dream house after it turned out her wheelchair-using friend "Share a Smile Becky" couldn't fit in the elevator. Last year Mattel ran their first commercial featuring a boy (gasp! but not really) playing with Barbies and loving every second of it.

All of these, no matter how long they've taken to materialize, are good changes. But none of them addressed the biggest issue people have had with Barbie for decades: her body shape.

Barbie's body shape isn't just an unrealistic stereotype — it's also physically impossible. If you were shaped like that; you'd die.

In 2013, Rehabs.com decided to show what Barbie's quality of life would be like if she were a real human. The results were ... unsettling.

You can see the full infographic here, but be warned, it's going to make you feel really bad for a plastic doll. Image from Rehabs.com.

Here's what Barbie would be like if she were real:

So, instead of being an aspirational symbol of femininity with a great career and a handsome boyfriend ... she'd be a weird demon creature that people take blurry night vision photos of in the woods and make horror movies about.

Can you imagine a skinny, bobble-headed creature shambling out of the woods on all fours? That's IRL Barbie, and she's terrifying.

Today's announcement is a step forward, but it's not the end of the road.

Now don't get me wrong. Growing up, I loved my Barbies. Some of them still live in an old naugahyde suitcase in my parent's garage. I'm delighted to see Barbie starting to look more like a person, like me, like you, and like the people we love. And I'm hopeful that with these changes, we'll see even more inclusivity from Mattel in the future — like trans Barbie, or elder Barbie, or veteran amputee Barbie, or pierced punk Barbie with a shaved head, among so many others. But most of all, this announcement reminded me that no mass-produced doll, in whatever shape and with whatever ethnicity, can be fully representative of the multitudes in all of us.

And I'm pretty sure Barbie would give me a high-five for that. You know, if she could bend her arms.