A troll attacked a gay lawmaker online. So he called the troll's grandma. 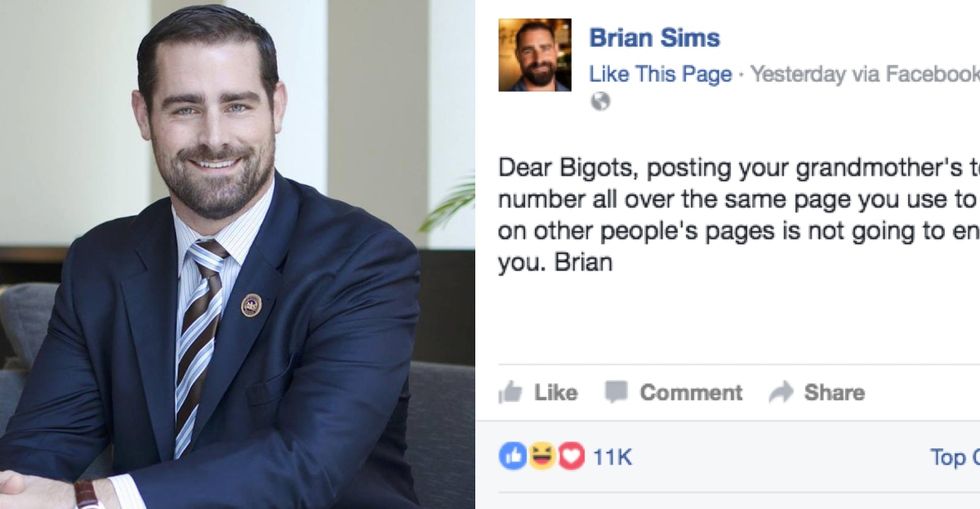 His pride and bravery have won him plenty of fans, but have also opened him up to a slew of hate speech and criticism.

So much so that Sims has gotten, well, pretty dang good at handling the trolls.

One man recently came to Sims' Facebook page to attack him, but got a little more than he bargained for.

After spewing some horrific insults at Sims via his Facebook page, the commenter (known only as David) got a response that had to have taken him off guard.

Sims called David's grandma and told on him.

Dear Bigots, posting your grandmother's telephone number all over the same page you use to post slurs on other people's pages is not going to end well for you. Brian

"David," Sims wrote in response. "... you shouldn't have posted your grandmother's telephone number on your Facebook page so many times. She and I just had a very disappointing chat about you."

Sims told Occupy Democrats he was hoping to get David himself on the phone when Grandma picked up. But she promised Sims that David would call him back.

He did, but not before David's grandmother, presumably, gave him an earful.

“She wasn’t kidding," Sims said. "I heard from him within two hours and while I can’t say we resolved anything, I can pretty much guarantee that Christmas at my home is going to be better than his this year.”

It goes to show: Just because you can say anything you want online doesn't mean you should.

Unfortunately though, this kind of hate speech isn't limited to anonymous internet trolls these days.

The world might be a better place if everyone stopped before they judged, harassed, attacked, or smeared another human being and thought: 'What would my grandma think?'