A hurricane destroys your home. Without your glasses, you're nearly blind. What do you do? 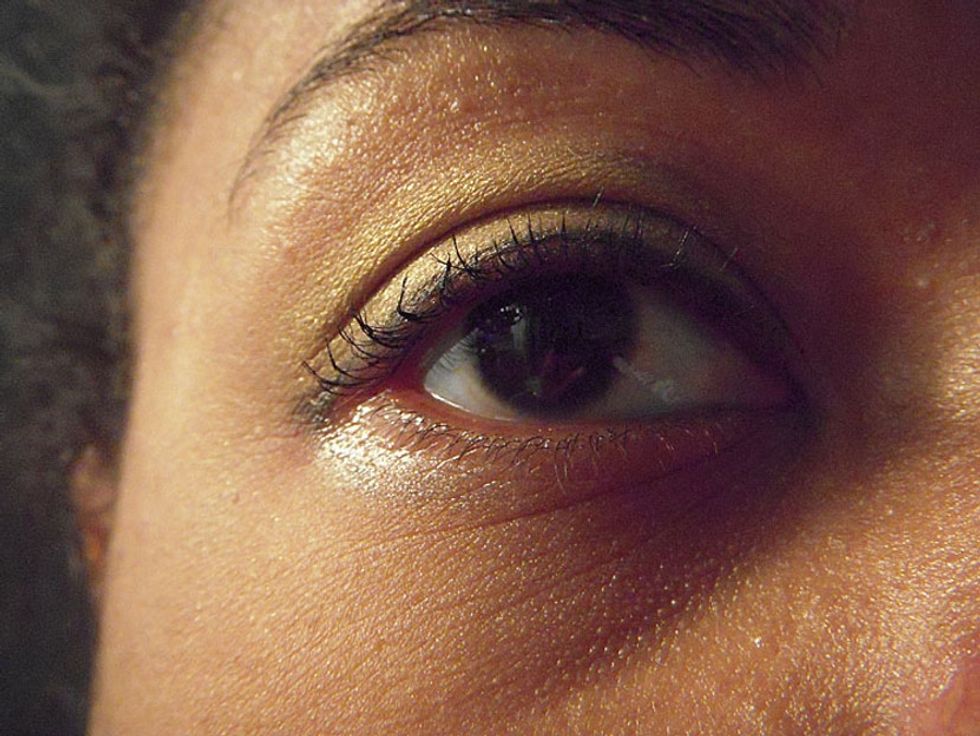 Like so many others, eye doctor Jarrett Johnson lost everything when Hurricane Katrina struck.

Her home? Flooded. Her optometry practice? Destroyed. Her family? Displaced and stranded throughout the city of New Orleans.

One phone call, though, was about to change her life. Maybe even more so than the storm itself.

Johnson and her kids were lucky enough to get out of New Orleans in time.

"My husband and I always had a plan," she told me. In the days and hours leading up to the storm, she packed up her office and sent her staff home. Then she jumped into a car with her children, just 2 and 6 years old at the time, and started driving.

Johnson's office was dismantled by storm waters from Hurricane Katrina. All photos courtesy of VSP Global.

After an 18-hour trek through flooded and crowded streets, she found herself in a little hotel in Horn Lake, Mississippi. Then Memphis. Her husband stayed in New Orleans for his job. Her father and brother-in-law did, too. Some other family members had made it to Houston, where she eventually joined them.

It was chaos. But at least she and her children were safe.

That's when the phone rang.

VSP Global, one of the largest vision care companies in the world, wanted her to come back to New Orleans.

At first, she thought they were nuts.

But VSP was adamant. They were scraping together a team of eye doctors — yes, eye doctors — to help out with the relief efforts. Johnson knew the city. She had treated thousands of patients there over the years. She was a perfect fit.

But leaving her family behind wasn't an easy decision.

"My husband was very, very frightened" of the prospect of her going back, she said. "New Orleans wasn't the safest place at the time. All the looting and those kinds of things. A lot of black mold. He was concerned about my well-being and my health."

But she did go back. And what she found when she arrived in the city devastated her.

We all saw Katrina's mass destruction on the news. But what we didn't see were the thousands of people who lost their glasses and contacts.

A piece of eyewear is such a small thing, but without it, some Katrina survivors couldn't do basic tasks. Couldn't navigate the city. Couldn't fill out FEMA paperwork. Couldn't begin to rebuild their lives.

And then there were the first-line defenders. The police and firemen who had lost their own eyewear in the fray. Without it, they couldn't see. And they couldn't help.

But there was another problem. Johnson and her peers had no building and no equipment to do their work. The city was still in shambles.

"I had to get in there and do something," she said. "I had worked in Central America and Costa Rica before; all those skills just kicked in. I immediately started making makeshift exam rooms."

She helped establish clinics anywhere she could, one of the largest ones inside a cruise ship dining room. She set up makeshift eyewear dispensaries, along with a network of helpers to form a sort of patchwork postal chain to get supplies into the city. Hopping from clinic to clinic, Johnson helped people get new glasses or contacts and also worked to stop the spread of severe eye infections due to the black mold caused by all the flooding.

All of this while living on the second floor of her home, since the first floor was completely drowned in sewage.

All in all, Johnson and her fellow optometrists treated 10,000 people over the six months following Katrina.

Johnson (left) poses with other volunteers.

But one patient stood out in her memory among the rest.

He was a man she recognized from her practice. He told her his home was destroyed and that he waded through waist-deep water for hours trying to get to the Superdome with his hard contact lenses, needed to treat a serious eye condition, on his tongue the whole time so he wouldn't lose them.

He made it to the Superdome, she remembers him saying. But after hours of wading and swimming, physically and mentally drained, he somehow lost the lenses after all.

When he arrived at one of her makeshift clinics, he was completely disoriented. And desperate to get his sight back.

Thanks to Johnson and the others, people like him were able to see again. And from there, they could finally begin picking up the pieces of what was lost.

As for Johnson? She doesn't want kudos. She says the experience helped her heal.

"The people of New Orleans were grateful," she said. "But myself and the other doctors, we had lost our jobs, our homes, our income, and even our family members. This gave us an opportunity to fill some of that emptiness."

Giving back was her way of beginning again. Whether she wants the title or not, that makes her a hero.