This isn't your mother's Barbie doll. 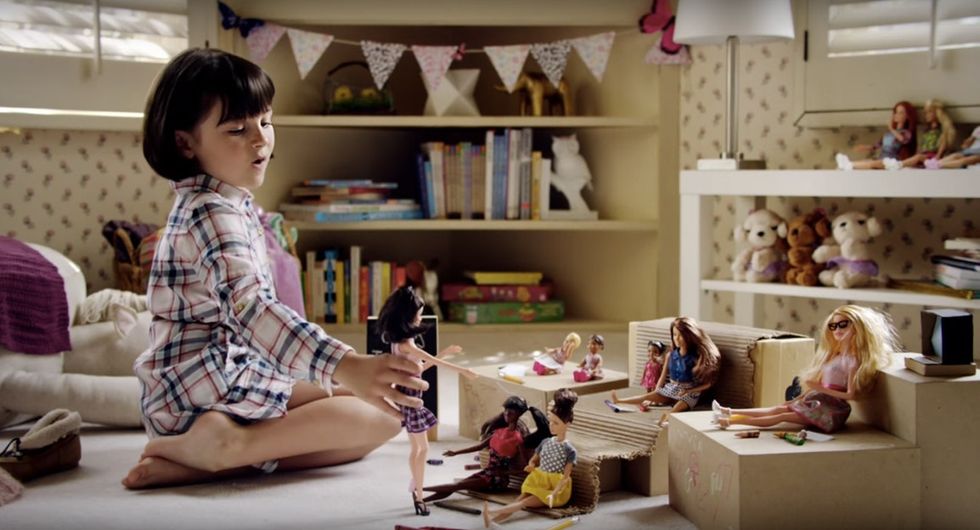 It's nothing personal, Barbie, but I'll be honest — I've taken issue with your brand for a few reasons.

From allegedly encouraging unhealthy dieting habits to seriously dropping the ball on Computer Engineer Barbie (like, seriously, dropping the ball) — criticism directed at you runs far and wide. And for good reason!

But, I gotta admit, you're really bucking the trend with your new ad — one so un-Barbie-like, you don't even realize it's promoting the dolls until the very end.

It's a welcome change.

Throughout the two-minute video, bold, confident (and hilarious) girls show up to do their, well, ... big girl jobs.

Or a college professor talking about brain stuff.

One girl pulls off head coach of an all-male soccer team brilliantly.

And another is remarkably informed on dinosaurs in her position as a museum tour guide.

The girls flaunt their wisdom and quick wit in front of unsuspecting adults, who — having no idea they're on camera — seem perplexed, charmed, and entertained throughout.

The girls' jobs — in fields related to science, sports, and medicine — not-so-subtly affirm the message to anyone watching: Yes, girls can grow up to be whatever they choose to be, free of gender stereotypes.

It isn't until the ad's surprising conclusion that you see how Barbie dolls play a role in the girls' lives.

The ad reflects a surprising change in Barbie advertising by focusing on girls' empowerment rather than the usual playtime accessories.

It's just the start of a " brand evolution," Evelyn Mazzocco, global SVP and general manager of Barbie, told Adweek. Mazzocco noted that the company is encouraging parents to rethink the dolls' role in their children's lives:

"This ongoing initiative is designed to remind today's parents that through the power of imagination, Barbie allows girls to explore their limitless potential."

But reminding girls they can feel confident pursuing their dreams — free of gender stereotypes — is certainly a step in the right direction.

Check out Barbie's ad below: