5 things my dad taught me about being a black woman in America. 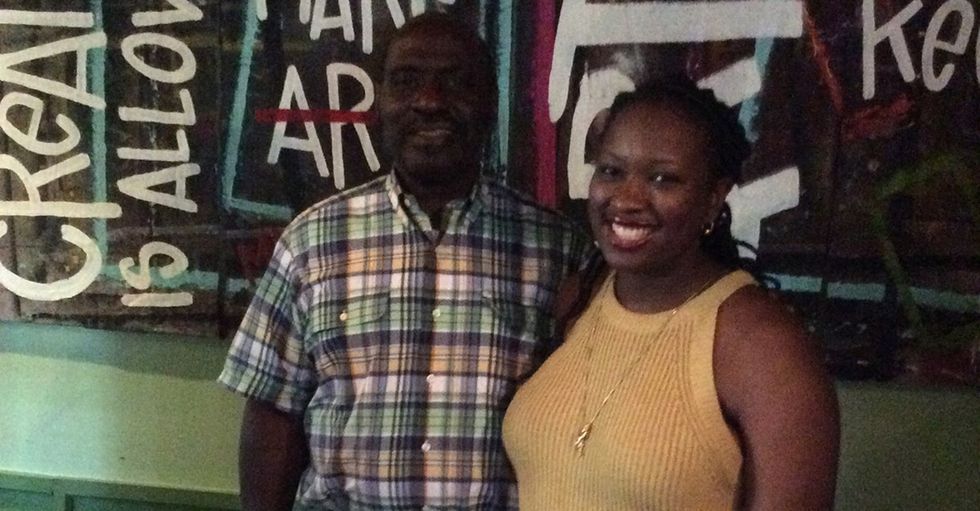 On my first day of preschool, my dad tied my shoes.

He gave me an Arthur lunch box and held my hand as we walked across the parking lot to the St. Nicholas preschool. Just before we got to the entrance, he got down on one knee, placed his huge fan-sized hand on my pint-sized face, looked into my eyes, and said:

“Your skin is beautiful, and don’t let anyone tell you otherwise.”

At 4 years old, I just stared at him. I waited for the next part of the sentence, which I assumed would be an offering of a toy, a juice box, or playtime. But it didn’t come. This was my introduction into the real world.

This world is a world where I'm often the only black person in the room. It's a world where blackness, especially my extremely dark black skin, might be mocked by people from all backgrounds.

My dad was born and raised in the Deep South. He was raised at a time when lynchings were the norm and when calling black employees the n-word was just part of being in the boys club.

He did an amazing job raising his four black kids, parenting that spanned three decades. And I, his last child, ended up morphing into a young adult during the Black Lives Matter movement.

From my dad, I've learned five lessons about what it means to be a Black American.

On Father's Day this year, I wanted to thank my dad for these lessons, and I also wanted to share them with you:

1. My blackness is my pride and glory.

My parents used to play Stevie Wonder after they were done listening to NPR on the way to school or the store. My dad, a fan of gardening, talk radio, and collards on a Sunday, boasted his black manhood as a point of pride, setting a resounding example on how I should view my black womanhood. We went to a Southern Baptist church on Sundays, and I spent part of my summers with my grandmother in Baton Rouge, visiting my dad's siblings during the week, progressively understanding the journey it took my parents to get our family to where it is.

Many of those experiences shaped me into who I am today. My parents made sure I understood my history and culture, and in turn, I dove deeper into what black identity meant for me at a young age.

I found that my blackness, the physical and mental aspects of it, are what makes me who I am. For that, I’m thankful.

2. Hard work is the only way to move forward in this world.

My dad grew up as a young boy in Mississippi during the Jim Crow South. As the oldest of eight children without an active father, he was responsible for getting himself to a better, less dangerous life and carrying his siblings with him. He ended up becoming a CPA and working as a community college professor because he had to put four kids through school. I never saw him complain, I never saw him be late to work, and I never saw him in a wrinkled work shirt (or gardening shirt, for that matter). The man has some serious pride.

He valued his work, and he valued the lives of the kids he was responsible for raising. Because of his example, I got my first job the summer after junior year, and I haven’t stopped working since. I'd like to think some of his work ethic has carried over to me.

My dad is a Vietnam veteran. During the time of isolation and imminent danger in a country far different from his own, he learned how to cherish the things he loved — like the Four Tops and his alone time — and to cherish himself. This lesson, loving yourself at times of strength and weakness, is something he wanted his kids to know as well.

According to my dad, you’d better love yourself before anyone else does. He is right.

My family members are very different. Our personalities and beliefs vary, but from my dad, I've learned that it's important to never forget and always acknowledge the people you love, however you are able to do so.

Whether your family consists of blood relatives or good friends, respect them, love them, and care for them. Chances are, they’ll probably do the same for you.

5. You are beautiful, whether the world acknowledges you or not.

As a dark-skinned black woman, I was mercilessly taunted during middle and high school. Discussing the complexities of colorism was never a thing in our household until the teasing began, so my parents had to do some intense work to keep me grounded when all I wanted to do was yell.

My dad, with whom I share the same skin tone, was particularly encouraging. He knew what it was like to be dark in a world that values lighter skin, and he shared his ways of getting through it with me. He's not the most emotional nor most affectionate guy on the block, but he made it very clear that either I could understand my beauty or I could let the world make the decision for me. I chose the former.

Photo used with permission from the author.

For all these things and more, I thank you. I love you, Dad.