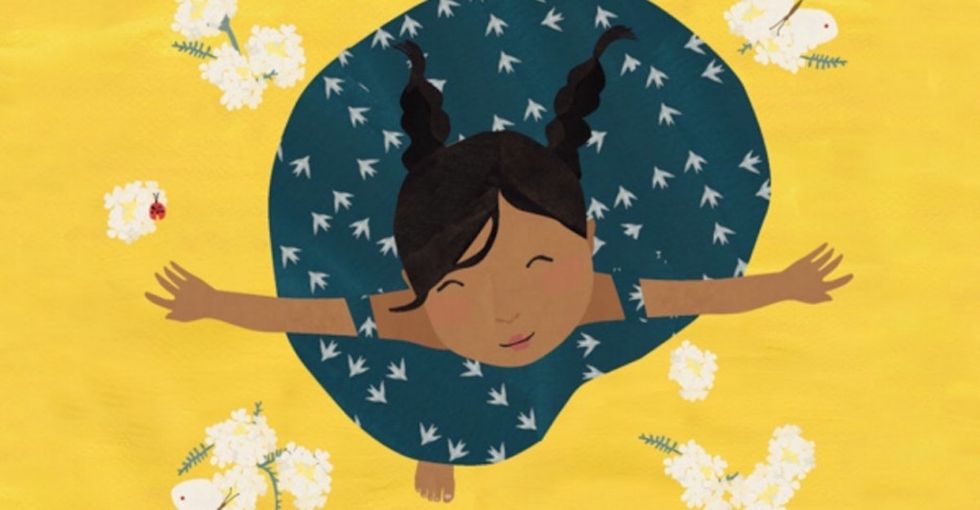 Only 1% of the children’s books published in the U.S. in 2016 featured Indigenous characters.

Just a quarter of that 1% were written by Indigenous authors.

“Most of what kids see in books today are bestsellers and classics that stereotype and misrepresent native people in history," says American Indians in Children's Literature's Debbie Reese, who is Nambe Pueblo. She recommends books that veer away from those stereotypes. They feature modern-day culture, countering the notion that Indigenous people somehow vanished with the past.

1. "You Hold Me Up" by Monique Gray Smith, illustrated by Danielle Daniel

"You Hold Me Up" by Monique Gray Smith, illustrated by Danielle Daniel

This vibrant picture book encourages children to show love and support for each other in their everyday actions. This is a foundational book about building relationships, fostering empathy, and encouraging respect between peers, starting with our littlest citizens. Ages 4–8.

2. "When We Were Alone" by David A. Robertson, illustrated by Julie Flett

"When We Were Alone" by David A. Robertson, illustrated by Julie Flett

When a young girl helps tend to her grandmother’s garden, she begins to notice things. Why does her grandmother have long, braided hair and beautifully colored clothing? As she asks her grandmother about these things, she is told about life in a residential school a long time ago, where all of these things were taken away. "When We Were Alone" is a story about a difficult time in history, and, ultimately, of empowerment and strength. Ages 4–8.

3. "Little You" by Richard Van Camp, illustrated by Julie Flett

"Little You" by Richard Van Camp, illustrated by Julie Flett

Richard Van Camp has partnered with award-winning illustrator Julie Flett to create a tender board book for babies and toddlers that celebrates the potential of every child. "Little You" is perfect to be shared, read or sung to all the little people in your life — and the new little ones on the way. Ages 0–5.

This bedtime poem written by Inuit throat singer Celina Kalluk describes the gifts bestowed upon a newborn baby by all the animals of the Arctic. Lyrically and lovingly written, this visually stunning book is infused with the Inuit values of love and respect for the land and its animal inhabitants. Ages 3–7.

5. "My Heart Fills With Happiness" by Monique Gray Smith, illustrated by Julie Flett

"My Heart Fills With Happiness" by Monique Gray Smith, illustrated by Julie Flett

The sun on your face. The smell of warm bannock baking in the oven. What fills your heart with happiness? This beautiful board book serves as a reminder for little ones and adults alike to reflect on and cherish the moments in life that bring us joy. Ages 0–5.

6. "I Am Not A Number" by Jenny Kay Dupuis and Kathy Kacer, illustrated by Gillian Newland

"I Am Not A Number" by Jenny Kay Dupuis and Kathy Kacer, illustrated by Gillian Newland

When Irene is removed from her First Nations family to live in a residential school, she is confused, frightened, and terribly homesick. She tries to remember who she is and where she came from despite being told to do otherwise. When she goes home for summer holidays, her parents decide never to send her away again, but what will happen when her parents disobey the law? "I Am Not A Number" is a powerful story of resistance, resilience, family, and identity. Ages 7–11.

7. "Hiawatha and the Peacemaker" by Robbie Robertson, illustrated by David Shannon

"Hiawatha and the Peacemaker" by Robbie Robertson, illustrated by David Shannon

Born of Mohawk and Cayuga descent, Robbie Robertson learned the story of Hiawatha and the Peacemaker as part of the Iroquois oral tradition. Hiawatha was a strong Mohawk who was chosen to translate the Peacemaker’s message of unity for the five warring Iroquois nations during the 14th century. This message succeeded in uniting the tribes and forever changed how the Iroquois governed themselves — a blueprint for democracy that would later inspire the authors of the U.S. Constitution. Ages 5–10.

8. "Sharing Our World: Animals of the Native Northwest Coast" — an artists' collaboration

"Sharing Our World: Animals of the Native Northwest Coast" — an artists' collaboration

The images and text in this book are the collective work of First Nations and Native artists from communities throughout the Pacific Northwest. Each artist from the Nuxalk, Namgis, Coast Salish, Kwakwaka’wakw, Haisla, Heiltsuk, Haida, Bella Bella, Tsimshian, Kwa Na Ki Nulth, and Nuchatlaht Nations has shared the importance of their personal and cultural relationship to the natural world. Ages 3–7.

Olemaun is 8 and knows a lot of things, but she doesn't know how to read. Ignoring her father’s warnings, she travels far from her Arctic home to the outsiders’ school to learn. There she encounters a black-cloaked nun who tries to break her spirit at every turn, but Olemaun is more determined than ever to learn how to read. Based on the true story of Margaret Pokiak-Fenton. Ages 6–8.

Tch, tch, sh, sh, tup, tup. Spend the day picking wild blueberries with Clarence and his grandmother. Meet ant, spider, and fox in the ancestral home of author and illustrator Julie Flett. This book is written in both English and Cree, in particular the n-dialect, also known as Swampy Cree from the Cumberland House area. Ages 4–8.

11. "We Sang You Home" by Richard Van Camp, illustrated by Julie Flett

"We Sang You Home" by Richard Van Camp, illustrated by Julie Flett

In this sweet and lyrical board book from the creators of the bestselling "Little You," gentle rhythmic text captures the wonder new parents feel as they welcome baby into the world. A celebration of the bond between parent and child, this is the perfect song to share with your little ones. Ages 0–5.

12. "Saltypie: A Choctaw Journey From Darkness Into Light" by Tim Tingle, illustrated by Karen Clarkson

"Saltypie: A Choctaw Journey From Darkness Into Light" by Tim Tingle, illustrated by Karen Clarkson

Author Tim Tingle tells the story of his family’s move from Oklahoma Choctaw country to Pasadena, Texas. Spanning 50 years, Saltypie describes the problems encountered by his Choctaw grandmother  —  from her orphan days at an Indian boarding school to hardships encountered in her new home on the Gulf Coast. Saltypie is the story of one family’s efforts to honor the past while struggling to gain a foothold in modern America. Ages 6–10.

Joe and Cody, two young Cree brothers, are spending the summer with their family by one of the hundreds of lakes in northern Manitoba. Summer means a chance to explore the world and make friends with an array of creatures, but what Joe and Cody like doing best of all is flying dragonfly kites. Tomson Highway brilliantly evokes the very essence of childhood as he weaves a deceptively simple story about the power of the imagination. "Dragonfly Kites" has a bilingual text, written in English and Cree. Ages 4–7.

This story first appeared on Medium and is reprinted here with permission.