Why I worked on an incredible new campaign to shut down body-shamers.

It's time for plus-sized women to be seen in the fashion mainstream. This campaign gets that. 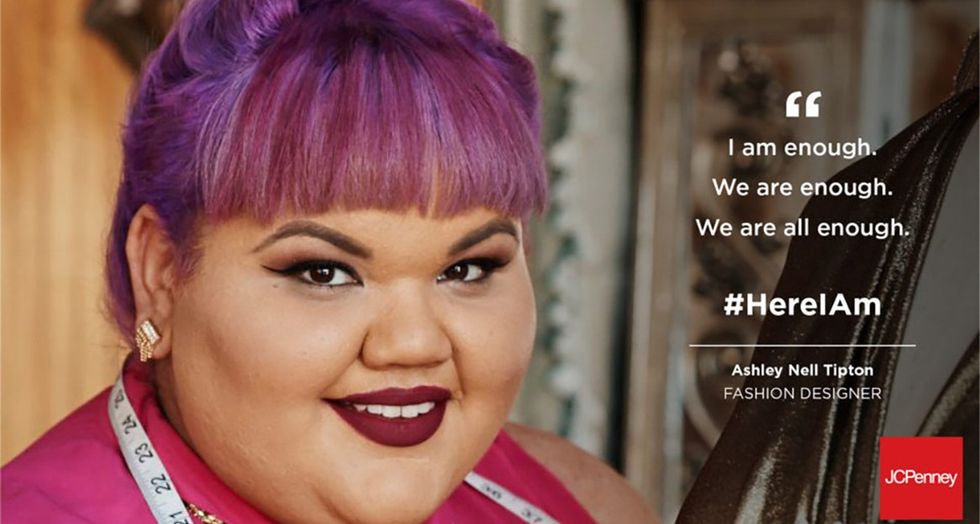 Plus-size women have been asking for more clothing options since the beginning of time (an exaggeration, but only sort of).

“I don't know how many times I've walked into a store and quickly walked out, promptly reminded that 'I'm not allowed in here.' What does it say when a store refuses to even acknowledge that I exist?”

Many of the first “fatshion” blogs started eons ago. They were adored for taking the very little that was available and turning it into something creative and stylish. These individuals were inspiring “fatshion” pioneers, and we owe them for the radical space that has been carved out for all the plus fashionistas today.

Now our options are increasing (thank you Ashley Nell Tipton for bringing us sequins in size 34 this fall!). And even though we still live in an overwhelmingly straight-sized clothing world ... I’m diggin’ the forward motion.

If you told me when I first started blogging that my plus-size body would eventually be represented in a mainstream clothing campaign, I would have jumped for joy ... and then stopped to give you a long, skeptical stare.

After all, four years ago I was creating my own faux ads featuring my shape and size while asking, “Where is the positive representation of fat bodies in the media? Don’t you know that we’re worthy of visibility too?”

Yet, a few months ago, I was asked to work on JCPenney’s "Here I Am" campaign, which was created to put plus-size bodies and their stories front and center in a straight-sized world, and it turned out to be a media game-changer.

Jes Baker is here to stay.

This campaign — and the response to it — is a prime example of how America has started to shift our marketing strategies. While exclusivity has been the most successful business approach for decades, keeping plus-size clothing — and people — in separate sections or separate stores, it looks like we might be moving toward inclusivity instead. What a wild concept! And when it comes to clothing ads, I couldn’t be more pleased.

Working on JCPenney’s #HereIAm campaign was an indescribable joy for a lot of reasons. Really.

To shoot the video, "Project Runway" winner Ashley Nell Tipton, singer/songwriter Mary Lambert, fashion blogger Gabi Fresh, yogi Valerie Sagun, and I all met in Dallas a month ago. We spent our time basking in the empowering energy that only comes when bad-ass fat women’s stories are finally viewed as crucial to the mainstream body image conversation.

I’ll be real: Dallas in the summer is a nightmare for someone used to dry Arizona heat, but the lamentable humidity was easily overshadowed by the fact that as we moved from location to location (sometimes singing karaoke and sometimes drinking way too much coffee), the crew would follow us. They celebrated both our existence and our opinions. We had a cheering fan club on set every time.

Additionally (and perhaps most importantly), we were explicitly asked to speak our truth without compromise. For me, this is a both a non-negotiable part of representation and an exciting opportunity.

It’s always a gamble when a large company asks you to collaborate with them.

There’s always the possibility that your story will be warped into something that portrays fat bodies in a defeatist, defensive, or dispirited light. I’ve watched this happen too many times, simply because our world currently feels most comfortable with stories that have a defeatist, fat-shaming frame, even though it’s not representative of real life.

This is a chance you take every time you are filmed and the footage leaves your hands and enters an editor’s office.

So I held my breath for a month, hoping that JCPenney meant it when they said they wanted to celebrate us our way in their new ad campaign. And PRAISE THE BODY-LOVIN’ GODS, because they totally did. After watching the newly released video, I smiled ... and started breathing again.

I’m hyper-aware that as a culture, we still have a long way to go when it comes to actual inclusivity, visibility, and body equitability. I’m overjoyed to have been part of JCP’s campaign, but we still have so much work to do.

When we start to add different kinds of bodies into online feeds in a positive way, my hope is that we will start to see all bodies (and I mean all) portrayed in the media in a beneficial way.

If you can add just a few body-diverse Facebook pages to your feed today, you'll be helping in a small way. Because representation can turn into respect, which will ideally lead to more opportunities. And eventually, I believe that these three things will create a world that prioritizes equality. This is where we need to be headed!

#HereIAm is one bold and lovely step in that direction, and I am fortunate to have been a part of it.

You can watch the empowering video here: