When a pilot with no arms met a 3-year-old girl with no arms, the world's best hug occurred.

It was an incredibly heartwarming moment. 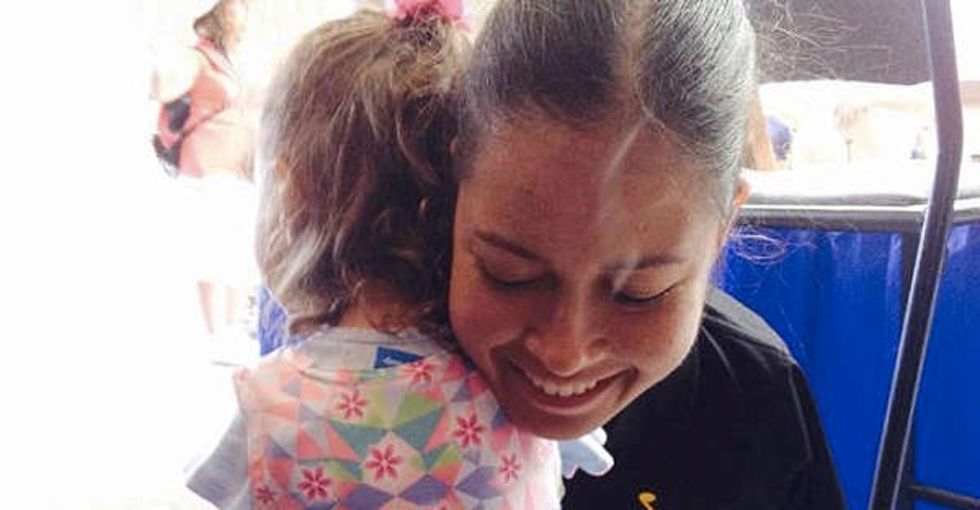 Jessica Cox was born without arms, but that didn't stop her from fulfilling her dream of becoming a pilot.

In "Right Footed," a documentary about Cox's incredible accomplishments, she attributes much of her confidence to an older woman named Barbara Guerra, who mentored her.

Guerra, who is also missing both arms, helped Cox on her journey to realizing that her disability didn't have to hold her back. It was the first time Cox had met anyone who looked like her, who was completely independent and doing all the things that Cox had been told a person needed arms to do.

"It's really incredible how one person can be that difference for someone," Cox says in the trailer.

At the premiere of "Right Footed," Cox met a 3-year-old girl who was also born without arms.

Cox wanted to show her that you don't need arms to do the things that are most important to being human, just as she had learned many years ago.

So she gave her a hug.

According to Nicole Pelletiere of ABC News, hugging is extremely important to Cox.

"The top question I get as a speaker is 'How do you hug?,'" [Cox] said. "That picture clearly showed that you don't need arms to embrace someone. It was special that we could feel the same, mutual feeling — what a hug is without arms."

But giving out hugs is just as important. It shows each and every person born with her condition that they can live a life that's just as happy and full of love as anyone else.

As Cox puts it in "Right Footed": "All it takes is one person."

Editor's Note: This story will be updated as events are developing.

A grand jury in Jefferson County, Kentucky has formally charged a former Louisville police officer with with three counts of wanton endangerment in the first degree for his conduct in the shooting that killed Breonna Taylor. According to the Washington Post, the jury said Brett Hankison "wantonly and blindly" shot 10 times into the apartment where Taylor was sleeping. Under the current charges, Hankison faces up to 5 years in prison.

In responding to the charges, Kentucky's Attorney General Daniel Cameron said the grand jury ruled the other officers in the incident -- Sgt. John Mattingly and Det. Myles Cosgrove -- acted accordingly. Cameron urged calm in response to the charge, noting that "peaceful protests are your right as an American citizens," and that many people would be "disappointed" both that the other officers were not charged and some offended that Hankison was charged at all. However, saying acts of "revenge" were not warranted, Cameron said his department's own role is to enforce the law: "It isn't the quest for revenge, it's the quest for truth," adding that he hopes to be part of "the healing process."