Documentary filmmakers Zach Ingrasci and Chris Temple spent a month living on the Za'taari refugee camp in Jordan. Zach and Chris share a little how their life and neighbors were (and still is right now for about 140,000 Syrians) in photographs below. 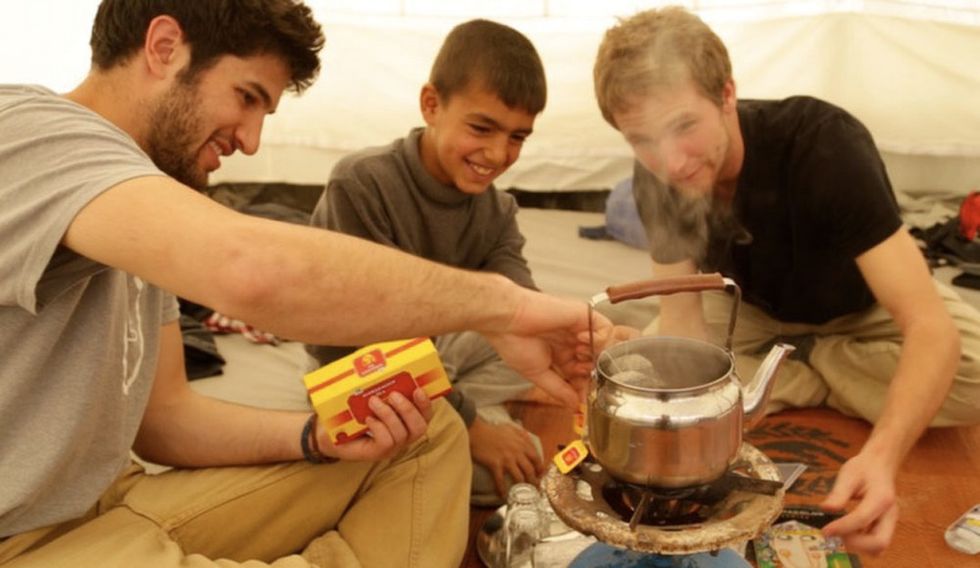 "In an effort to better understand refugee life, we spent one month this winter living alongside displaced families in the Za’atari refugee camp. As the first filmmakers ever allowed by the United Nations to be given a tent and registered inside a refugee camp, we were able to get a never before seen look into the world’s most pressing crisis.

Our experience uncovered overwhelming trauma but also the untapped potential our uprooted neighbors posses. With the right programs we can support healing, ease the burden on host countries and even empower the disenfranchised by unleashing people’s creativity."

"...[W]e are provided with a UNHCR tent, 4 mattress pads, 8 blankets, a bucket, an aluminum pot, a gas heater (but no gas), a hygiene kit (soap, toothbrushes, detergent), a bread voucher, ration card, ID card, and a welcome meal (complete with Fig Newtons!). They also offer additional clothes and a second meal to those who choose. The supplies strike us as well-thought-out and, thanks to the generosity of donors, much better than what NGOs could provide when the camp first opened."

"Inside [Um Ali's] caravan, one wall is completely covered by Arabic writing. Even without knowing what it says, it’s striking to look at. We ask her about the wall and Um Ali tells us that when she first came to Za’atari she knew no one and was deeply depressed. She had lost a son, her home and everything she once knew and loved back in Syria ... she began to write everything she remembered on the wall.

At the market one day [Um Ali] walked through the gates of the women’s center ... a women’s group was taking place where they were sharing stories very similar to hers. She came back the next day and shared her own story."

"Um Ali thrived at the women’s center and was eventually hired to teach women the countless arts and crafts she had mastered back in Syria. This was the first job she had ever held and she became an important provider for her family. We ask if she likes to work, and she proudly tells us, 'In Syria, working wasn’t necessary so it never crossed my mind that I would enjoy it.'"

Ziyad is an artist who built, among other things, a fountain, by repurposing aid items.

"He built a bedroom for his kids, fashioned a bread oven, planted a garden, pieced together a storefront and is in the process of adding a private bathroom and cement patio to his caravan." (above)

Ra’ouf, a 10-year-old neighbor, and Zach and Chris make tea.

"Children under the age of 18 make up over 50% of the 95,000 current residents in Za’atari refugee camp. This statistic is very apparent; kids are everywhere in Za’atari. They freely roam in small packs doing what all young kids do when they get together. Only 20,000 of the children in Za’atari are enrolled in school and only about 11,000 consistently attend classes.

We find out, however, that Ra’ouf does regularly go to what he calls 'the nursery,' his name for one of Save the Children’s 'Child-Friendly Spaces.' Here Ra’ouf can play soccer, draw, and do a number of other activities with other kids ages 5 to 17. There are two of these spaces in District 5 alone so it isn’t as crowded as the schools and Ra’ouf says it is a fun place to go."

If there's anything Americans need right now, it's a good laugh. In these divided times, if there is anyone who can provide one, it's "Weird Al" Yankovic.

The good news is he's back with a video that's a rare foray into American politics. Yankovic has avoided the topic throughout his career, although he did some non-partisan lampooning of the 2016 presidential debates with "Bad Hombres, Nasty Women."

In 2015, he told the Washington Times that he stays away from "sensitive" issues like "political topics. "And I don't want to divide my fan base if I can help it," he said.

"The other reason I don't do a lot of political humor is it dates pretty poorly," Yankovic said. "Things that are topical in the political arena this week would be old news a month from now, so that's probably not the kind of thing I want to have as part of my catalog."

Americans spend about $1,2000 a year on average for prescription drugs. That's more than anywhere else in the world. Private insurers and government programs pick up the bulk of the costs which we then pay through higher taxes and insurance premiums.

A major reason why Americans pay so much more than other countries is that the U.S government isn't allowed to negotiate drug prices with pharmaceutical companies.

To better understand the underlying reasons for these astronomical prices, the U.S. House of Representatives Oversight and Reform Committee held hearings on Wednesday with current and former executives of three major drug companies.