This man's thank-you to Chelsea first responders represents the best of New York. 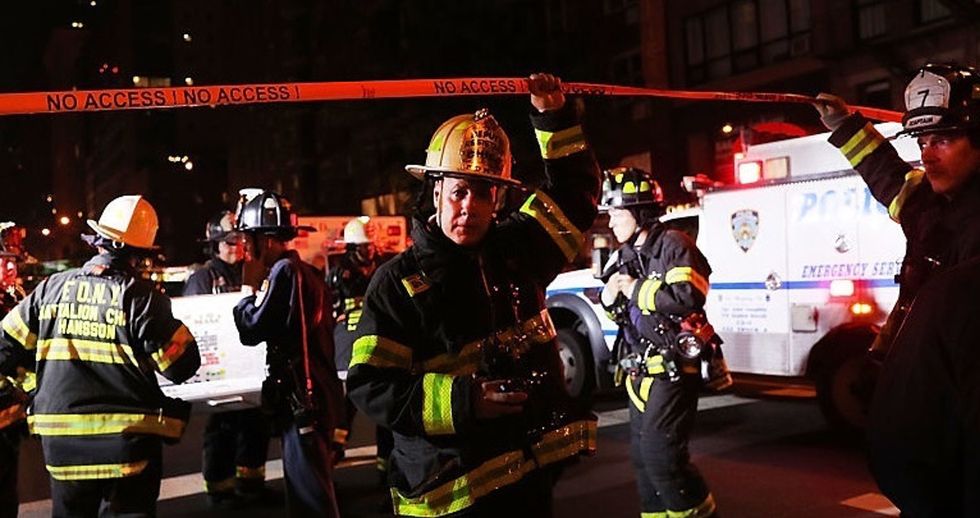 On Saturday, Sept. 17, 2016, a bomb went off in the New York City neighborhood of Chelsea.

As of this writing, there are still many unknown details. But we do know 29 people were injured and the act was intentional.

Immediately after the explosion, NYPD officers rushed to the scene and began an investigation. Within hours, they found a second device and prevented it from exploding. On Monday, Sept. 19, a suspect was identified and arrested.

It's times like this when we all need to take a moment and appreciate our first responders.

When they're rushing toward the scene that everyone else is running away from — putting themselves in harm's way to keep the rest of us safe — they deserve our respect and our deepest thanks.

And maybe a cup of coffee.

That's why this man showed up in Chelsea to give the officers there a well-earned pick-me-up.

His name is Jermaine, and he was captured on video handing NYPD and FDNY officials cups of coffee and bags of pastries from Starbucks — as a thank-you for their hard work.

ACT OF KINDNESS » As NYPD Guards the Explosion Scene Created by the Worst in People, First Responders Get Free Starbucks Delivered by New Yorkers, Seeing the Best in PeopleWe flew a crew to NYC to cover the #ChelseaNYC explosions the governor called terrorism this morning. Officials have not yet linked it to an international group. More stories like this to come.

Posted by KnightNews.com on Sunday, September 18, 2016

In the video, Jermaine says he wishes he could do more for the first responders keeping his neighborhood safe. The thankful officers say they are just happy to help.

Despite what you may think of New Yorkers, this small act of kindness isn't out of character.

Sure, most of us New Yorkers spend our days with tunnel vision — hopping from subway to subway, deli to coffee shop, just trying to get where we're going and make ends meet.

What little interaction we have with each other is either desperately shoving our way onto the 6 train or cursing at the cab driver who slammed on his brakes and stopped about four inches short of killing us in the crosswalk.

But there's so much more to the people of NYC than that. With the collective acceptance of the madness of city life, we also understand the importance of lifting each other up in times of need.

The secret to living in New York City is having each other's backs.

That's never more clear than when a tragedy strikes, and we're forced to take a moment and see if everyone's OK.

For better or worse, New Yorkers know how to handle things like this.

We may go back to ignoring and yelling at each other soon, but when the chips are down, the best of us are there to help, say thank-you, and hand over a bag of muffins.